The Wizarding World of Harry Potter

I've been a Harry Potter fan for a little over 10 years now, so obviously I'm incredibly excited for this land in IOA to open. I remember the first rumors of a theme park back in the day and I am so happy they became reality. I think this board should have an 'official' thread where all updates and question about WWOHP can be posted, I looked but couldn't find one so I created one. Anyway, here are some pics I took on June 17th of the building progress to kick off the thread.

Cool. thanks for sharing!

Emma Watson just said that her, Daniel Radcliffe and Rupert Grint have filmed a short sequence which will be shown on a ride there. She said sometihng about them talking to guests

That was the only information she gave though, but hopefully we'll be able to find out more about that soon

I'm not big into roller-coasters at all, but if there's an HP one I'll just have to ride it. I also hope there's some kind of simulation of Quidditch, that would be great.

News from the Orlando Sentinel:

July 5, 2009
E-mail Print Vote
Each of Orlando's theme-park resorts is promoting new attractions this year, but it's something that won't open until next year that really has people talking.

"The Wizarding World of Harry Potter," the $200million-plus "theme park within a theme park" that is scheduled to open by next summer in Universal Orlando's Islands of Adventure, has sparked a near-constant stream of speculation about just how the resort will bring Harry Potter's universe to life.

"The industry scuttlebutt is that it will be fabulous," said Bob Rogers, founder of BRC Imagination Arts, a Burbank, Calif.-based attractions-design company. "I see the gleam in the eyes of the people who are working on it. They think they've got a real winner here."

Universal has kept the project — based on the wildly lucrative, seven-book series by British author J.K. Rowling and the movies it inspired — largely shrouded in secrecy. Contractors working on the project have been required to sign confidentiality agreements, and the resort has offered few clues beyond a handful of artist renderings. Universal has also fueled the hype with a series of Potter-themed Internet polls asking fans questions such as what dragon they would like to ride (a Chinese Fireball beat out a Hungarian Horntail) and what they would like to drink (butterbeer bested pumpkin juice).

Shops, eatery, moreBut interviews with people in and around the project, and a review of public records, offer some details about what to expect.

Plans for the 20-acre Wizarding World show more than a dozen buildings, including at least three shops, a restaurant and multiple forced-perspective decorative buildings. The centerpiece will be the Hogwarts School of Witchcraft and Wizardry, the iconic castle and keep from the Potter books and movies.

Universal's Hogwarts, records show, will be 150 feet, or 15 stories, high.

The castle will also house what is expected to be the Wizarding World's signature attraction. Several people familiar with the project, including one person directly involved, said the ride will be what's known as a "robocoaster" — a ride system in which guests sit in seats suspended from a robotic arm that can swivel and swoop in multiple directions while it advances along a track.

Plans show the track snaking through more than a dozen scenes, though what those scenes will be remains a mystery. The attraction, according to the people familiar with it, will also feature an elaborate pre-show queue with special effects such as floating candles and snow falling indoors.

Before they arrive at Hogwarts, guests entering the Wizarding World will pass through Hogsmeade Village, an old-Europe-style town from the Potter novels. Universal's plans for Hogsmeade include The Three Broomsticks restaurant, shops and stylized locker and stroller-parking areas. The few clues Universal has provided indicate the stores will include Dervish & Banges, which sells and repairs magical equipment, and Honeydukes, a sweet shop whose treats include chocolate-covered frogs.

In between Hogsmeade and Hogwarts, Universal is building Hagrid's Hut, home of the friendly half-giant. It has also said it plans to re-create the Forbidden Forest, an ominous setting from the books that's home to creatures such as centaurs, unicorns and spiderlike "acromantulas."

Re-themed coasters?There is little yet to indicate what rides will be included in the Wizarding World beyond the Hogwarts "dark" ride. Part of the Wizarding World is being built in the Lost Continent section of Islands of Adventure, and documents indicate that two existing attractions there — Dueling Dragons, where riders choose between two intertwined roller coasters, and the Flying Unicorn, a children's coaster closed last year as part of the Potter construction — will be incorporated into Harry Potter's world.

Both rides are expected to be re-themed with Potter story lines. Records show, for instance, that Universal plans to add a large tent at the entrance of Dueling Dragons, which fans have speculated will ultimately be converted into a re-creation of a wizarding tournament from one of the books in which one of the events involves stealing eggs from dragons.

Of course, the rides are almost secondary for fans when it comes to the Wizarding World, said Robert Niles, publisher of the Web site themeparkinsider.com.

"People are expecting to immerse themselves in the whole Harry Potter universe," Niles said. "Really, a lot more than other attractions, people are going to be paying a lot of attention to the theming, the attention to detail and the atmosphere of the place, more so than the rides."

Universal would not elaborate on any of its plans last week.

"We will be excited to talk about the Wizarding World of Harry Potter — when we are ready to do so," spokesman Tom Schroder said.

The off-the-charts anticipation surrounding the Wizarding World of Harry Potter comes with some risk for Universal, said Rogers, of BRC Imagination Arts. "If you're dealing with one of the great intellectual properties like, for example, Star Trek or Harry Potter, you have to work very hard to make sure that you don't disappoint the fan base," he said.

Whatever is ultimately included when the Wizarding World opens next year, newer additions will soon follow. Universal's licensing contract with Warner Bros. requires the resort to add elements from the final movies in the series — the last of which isn't scheduled to arrive in theaters until 2011.

The contract even states that the later movies must be represented "in generally similar per-movie proportion" as the first five films.
Click to expand...

Growing old but not up

Thanks for the update! We were there in Jan. and not much to see. We will be going back in Nov. hope to see more. 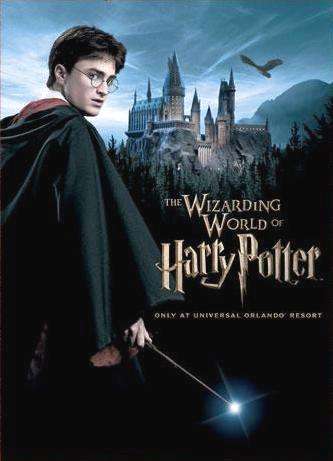 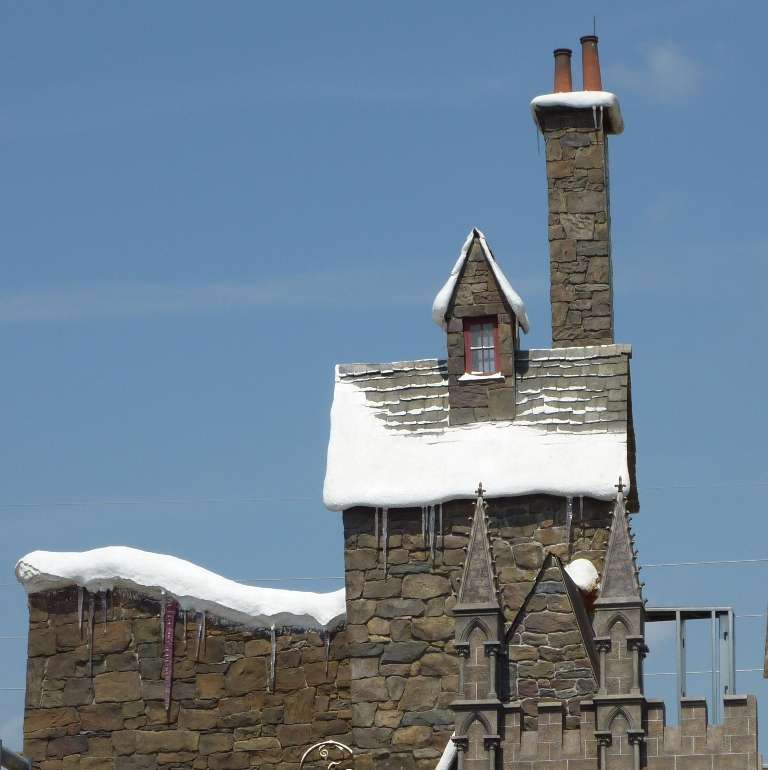 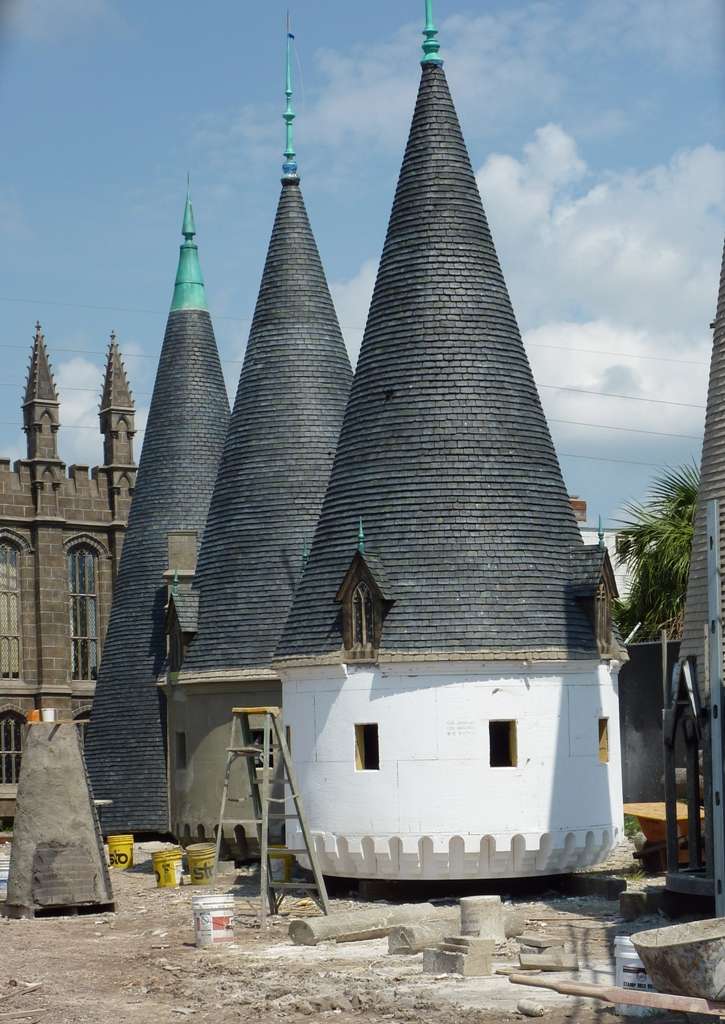 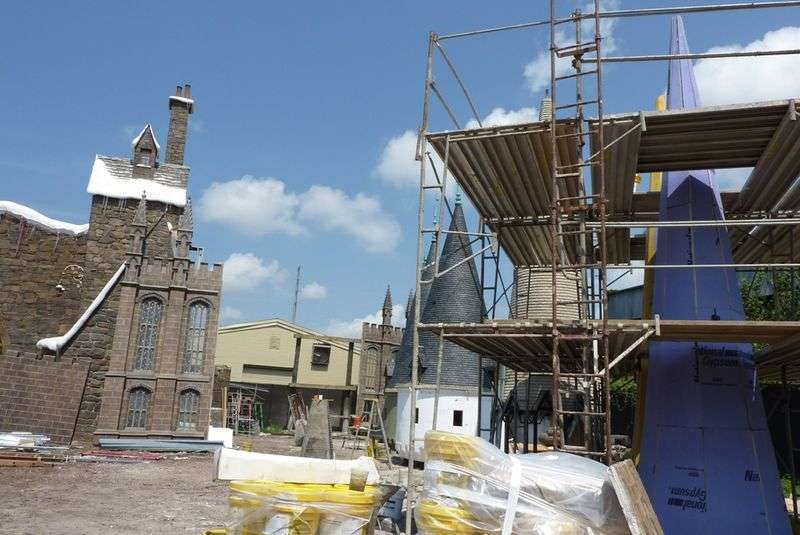 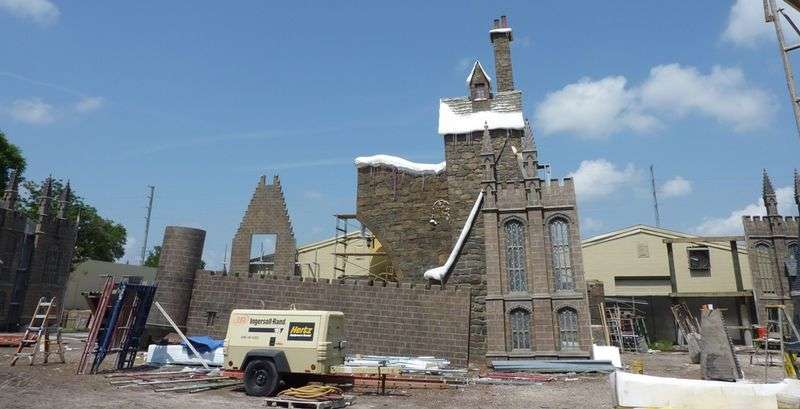 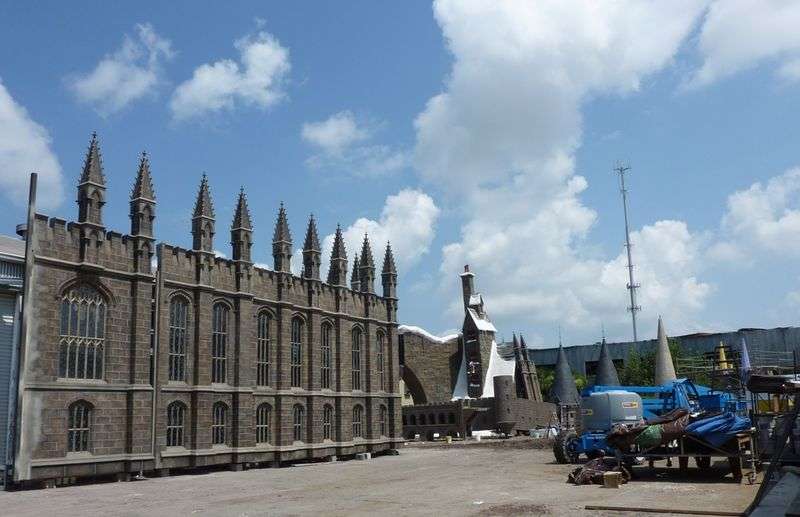 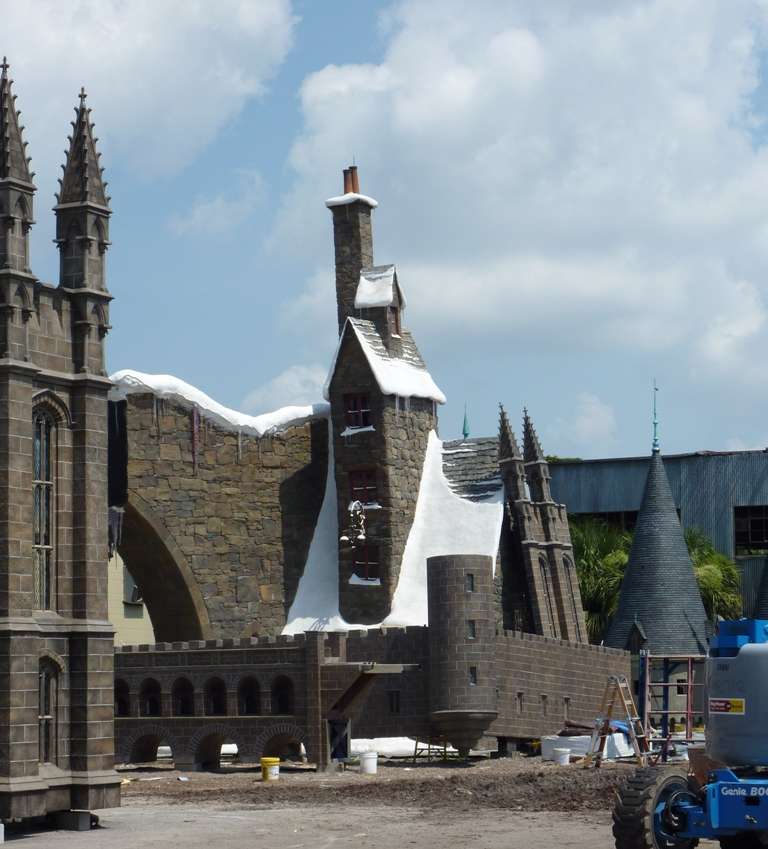 I am so glad I found this thread! We are planning our next trip to Orlando around the opening of this park! But by the sounds of it, it doesn't look like it will be open by June, 2010. Does anyone have an opening date? The previous article said Summer, 2010

Wow! Those are looking amazing! Thanks for sharing!

I wish they'd give us a more specific timeline also. I'm planning a trip around this opening.

I spend half my money on WDW, and waste the rest.

Great pics. Did someone hop the fence to get those-awesome.

I'm hoping Universal will make some kind of announcement with the release of this next movie. It seems like it would be a good time to be promoting the park!

We have a tripped planned next May and December to Orlando. 2 nights at Universal in May. We'll have to plan a little Universal in December if not open in May.

dr&momto2boys said:
I'm hoping Universal will make some kind of announcement with the release of this next movie. It seems like it would be a good time to be promoting the park!

We have a tripped planned next May and December to Orlando. 2 nights at Universal in May. We'll have to plan a little Universal in December if not open in May.
Click to expand...

Take this as a rumor as I can't remember where I saw the information but what I read was that it is slated to open July 2010. We have a trip to WDW planned for August 2010 and a couple days at Universal so I am really hoping this is the case!

I can't wait until it opens- but I will wait until a few months after the initial opening to visit. I think an October visit would be excellent. Not as hot and less people- so I can look at every little detail of Harry's world. I heard it would be opening earlier than there first expected date, but who knows?
M

Nothing to see here...move along.

xanphylus said:
I can't wait until it opens- but I will wait until a few months after the initial opening to visit. I think an October visit would be excellent. Not as hot and less people- so I can look at every little detail of Harry's world. I heard it would be opening earlier than there first expected date, but who knows?
Click to expand...

October would be a great time to come...you could do HHN while you're here.

We are hoping for a short Nov. 2010 trip to Orlando to enjoy SW and Universal. We are so excited. We just became HP fans this summer. Our DS is turning 9 next month so he is at an excellent age for HP.

I feel the nerd in me stirring

This is exciting and it's just like Universal to just give little hints like they are doing. I'm looking forward to seeing the village and forest most of all for some reason. 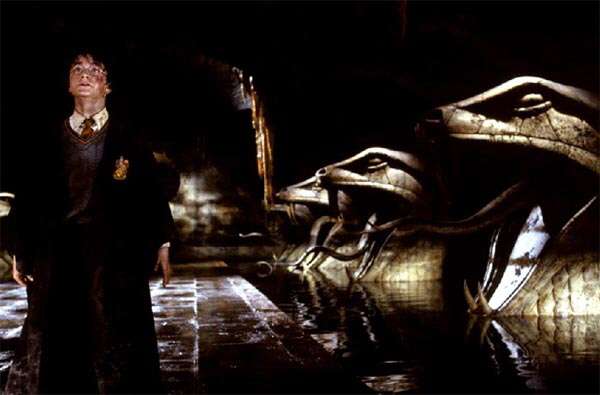 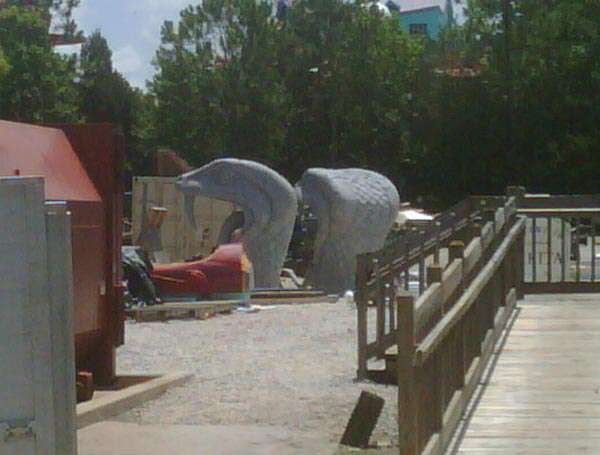 Nothing to see here...move along.

Hmmmm...I wonder if we could be seeing Dueling Dragons turned into something like Dueling Cobras?

Do you guys think there will be a grand opening with some of the movie stars or something of the sort? I'd love to attend that.