Official Dancing With the Stars - Fall 2020

She previously starred on an ABC show.

I agree with Carrie Ann again. Jeannie was much more exciting than Monica to watch.

Imzadi said:
Why does Bruno always stand up during the dance? . . . And it's always caught on camera. . .

He does it so he can see their footwork from a better angle - at least, that's my guess.

Adelle Dazeem said:
He does it so he can see their footwork from a better angle - at least, that's my guess.
Click to expand...

I'm from Ohio, I just live in Alabama.<br><Font co

So I watched tonight because I always like the Halloween show, haven't watched since the first episode, have been watching the dances on Facebook. I liked Johnny, he's the only one left that I have actually heard of, also Nev because although he is a "ringer" I like to watch him dance. I came away thinking I haven't really missed much, my husband and I always watched together but he dislikes Tyra as much as I do, she really is so full of herself, a costume change, really! Tend to agree with the comments tonight, I just really didn't care about the dancers, will probably only watch the finals if Johnny and Nev are in them but have a feeling that the ABC and Disney dancers will be there in the end. I don't think the ratings have been bad enough that Tyra won't be back next year, such a shame.

I actually agree with the majority of the scores this week. Chrishell is better than she’s ever been and Kaitlyn totally deserved the 7. That dance was off and messy for me.

Nev and Jeannie remain my favorites. Also really like AJ and Justina. Happy to see Skai rebound so well after last week.

Pros be speaking out https://www.etonline.com/artem-chigvintsev-calls-on-dancing-with-the-stars-judges-to-get-on-the-same-page-with-scoring

Also whose bringing the candy and booze to next week's show because we going to need it.

The show’s cold open will be a sketch aimed at encouraging people to vote as part of a nonpartisan initiative. Later, Tyra Banks will walk out to “Treasure” by Bruno Mars. In addition, for the first time this season, Relay Dances will find our couples split into three groups, dancing either a Cha Cha, Samba or Viennese Waltz relay. Each group will dance to a different song and the couples will take turns, one couple dancing at a time. One judge will rank the couples within each relay group and give bonus points depending on those rankings. These points will be combined with the individual scores and live voting to determine who is up for elimination.


The couples (with their dance choice and song) are as follows:
· Kaitlyn Bristowe (“The Bachelor,” “The Bachelorette”) and pro Artem Chigvintsev dancing Jive to “Don’t Stop Me Now” by Queen
· Disney Channel actress Skai Jackson and pro Alan Bersten dancing the Salsa to “Work It” by Missy Elliott
· Actress Justina Machado (“One Day at a Time”) and pro Sasha Farber dancing the Samba to “Magalenha” by Sergio Mendes
· Backstreet Boys singer AJ McLean and pro Cheryl Burke dancing the Rumba to “Way Down We Go” by KALEO
· Emmy® Award-winning host of “The Real” and sideline correspondent on “Holey Moley,” Jeannie Mai, and pro Brandon Armstrong dancing the Charleston to “Shout” by The Isley Brothers
· GRAMMY®-winning rapper Nelly and pro Daniella Karagach dancing the Rumba to “Nobody Knows” by The Tony Rich Project
· TV host Nev Schulman (“Catfish”) and pro Jenna Johnson dancing Viennese Waltz to “Stuck with U” by Ariana Grande & Justin Bieber
· Actress Chrishell Stause (“Selling Sunset”) and pro Gleb Savchenko dancing Viennese Waltz to “Hound Dog” by Elvis Presley
· Olympic figure skater and on-air commentator Johnny Weir and pro Britt Stewart dancing the Foxtrot to “Wonder” by Shawn Mendes

mandy200587 said:
Pros be speaking out https://www.etonline.com/artem-chigvintsev-calls-on-dancing-with-the-stars-judges-to-get-on-the-same-page-with-scoring
Click to expand...

I can see Artem and Val both whining about scores. They strike me as crybabies.

AustinTink said:
I can see Artem and Val both whining about scores. They strike me as crybabies.
Click to expand...

I'm wondering if, without Len, who was always a stickler for the need to do certain classic moves and choreography, it's showing how his critiques really do make a difference?

And I'm also wondering if Tyra, as an executive producer, has been adding in her two cents as to who she'd like to see move ahead?

Imzadi said:
I'm wondering if, without Len, who was always a stickler for the need to do certain classic moves and choreography, it's showing how his critiques really do make a difference?
Click to expand...

Jeannie had to withdraw 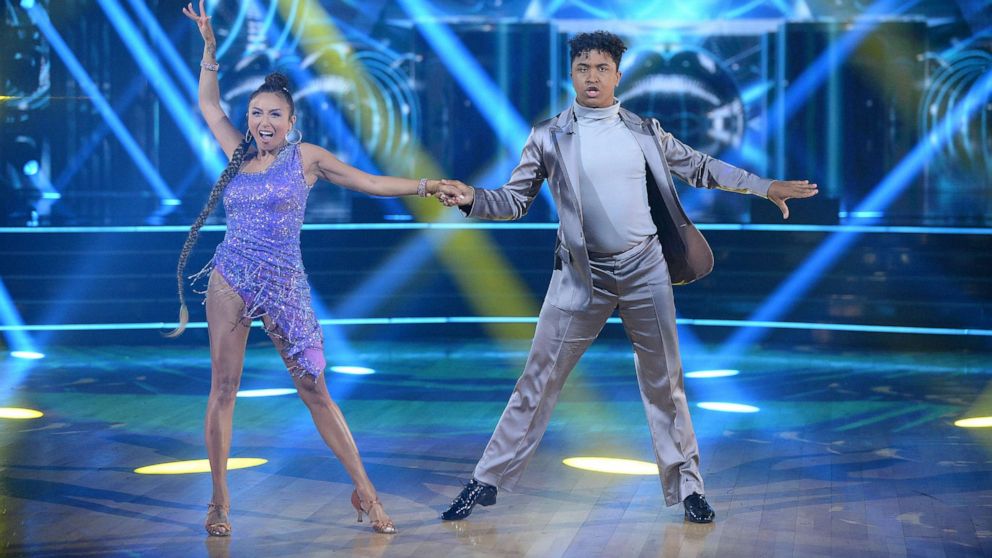 Jeannie Mai wrote, "I am heartbroken that my 'DWTS' journey has to end here."

mandy200587 said:
Jeannie had to withdraw
Click to expand...

I just read that on FB, I’m bummed, I really liked her

mandy200587 said:
Jeannie had to withdraw

Jeannie Mai wrote, "I am heartbroken that my 'DWTS' journey has to end here."

I just saw this. I’m so sad - she was my favorite. And what a scary situation! I’m glad she’s going going to be ok.

Holy smokes, hope Jeannie will be ok. Sad to see her go . The only reason I even watched this season was because i like Nev and Jeannie.
A

I just saw that Jeannie had to withdraw. What a bummer as I liked her dances.

With Jeannie withdrawing there will only be one couple eliminated tonight instead of two.
C