Up to what age do you think it's appropriate for a brother and sister to share a bed?

I think it would be a matter of personal choice. Unless you fear something would "happen", I personally wouldn't care if they were 82! In the typical amercian culture , kids demand their own room, never mind a bed. If you are talking about it for vacation, just ask the kids if they mind. If they think "yuck", then maybe mom can sleep with daughter and son can sleep with dad for the vacation. I am taking my niece and nephew in Nov. Because we will have five of us and for the sake of space, we will get two rooms and they will each have their own bed. This is also another route that you can go.

It is for holidays, we're trying to think ahead (DD almost 7 and #2 not born yet!) but we're wondering how many years we can get away with just booking a studio for of it we should start saving now so we can have 2 bedroom villas in the future!
J

With that kind of age difference I bet you can" get away" with it for a long time. He will be the baby to your DD even as he grows up. Remember he can sleep in the crib at WDW untill he is three .DD will be 10 by this time and might be the little mother or think that her brother is gross, so only time will tell how it will work out.

Personally, my parents don't spend extra money for connecting rooms or a room with two bedrooms when we're all capable of fitting in one room. Besides, I don't know about you guys, but the only thing that I do on a Disney vacation in my room is shower, get dressed, and sleep.

What a great level headed kid!! Bet your parents are proud of you!

Have a Disney Day!!!

My kids ages 7 and 10 still share a bed and don't have any issues with it. They know we couldn't afford to stay in nice hotels if we got 2 rooms. When they get uncomfortable we will deal with it.
R

We have the opposite problem. How do we get our kids to not want to share the same room/bed?

We adopted them from Russia last year and our son (7) always wants to sleep with his sister (6). He gets afraid in his own room. I think it's the whole thing that they slept in such close quarters, albeit their own beds when they were in the orphanage and they never had a chance to sleep in their own rooms. As it is in Russia, the kids sleep co-ed until the September in which they reach 7. At that point, they are moved to another orphanage for school and the children are devided by sex for sleeping.

We've tried everything and he gets brave for a night or two and then goes back to her room. This completely freaks out my DH and he wants each in their own room. It doesn't bother me as much because I know that they will get to a point that it isn't cool to sleep together, so they'll find their way to their own rooms.

We've tried telling him how brave he is... how proud we are of him... we've explained how if he has a bad dream it's because he was sleeping on the wrong side of the pillow and he needs to flip it over to the "good" side... On his brave nights, his sister puts on a pout because she doesn't want to see him go.

Now, as I write this, I must admit that he has slept in his own room for two nights in a row. Will tonight be the third??? Last night, he gave us a hard time, but the whole, "we'll be so proud of you" thing worked.

Do I think we'll get a hard time when they sleep on the pull out couch in our BWV studio????? No way.

My DH & I used to think that we'd each take a kid to sleep with, especially if we got two double beds, but we tried that on our first overnight trip with the kids and both of them thrash around so much that we didn't sleep, so we'll come up with other alternatives as time goes by.
L

My DS is 11 and his sister is 6. We leave for vacation in 2 weeks (not Disney

), and I wish they could share a bed. It's not that they are not willing, but my son is so big for his age that sharing the standard motel room double bed does not provide for a good night's sleep. We always have to look for accomodations with an extra bed. This year we are staying in a 2 room suite with a sofa bed. My guess is that if the sofa bed is queen-size that they wiil spend at least one night together.
W

just go with the resorts that offer bunk beds. my dd was 6 and my ds was 2 and it worked out great, they could never sleep together they would keep waking each other up tossing and turning.

With the age span of your kids, and especially with girls as "motherly" as they are, you won't have to even think about it for a long time. My DD11 and DS8 sleep in the same bed MUCH better than DS8 and DS3. DS8 often chooses the "extra" bed so he can sleep by himself and DD11 and DS3 share a bed.

Until my kids are uncomfortable, I'm going to assume it's fine. They are lucky to get to go on vacations.

RUDisney, can you imagine the trouble they would have had adjusting if they'd been adopted by different families?

Just an idea: how about putting a single-size air mattress on the floor in her bedroom with a sleeping bag on top? Some parents have that arrangement in the parent's room when their kids are going through a scary phase. I wonder if just knowing that he can move to her room in the middle of the night if he needs to might help him be more brave. They both sound like sweet kids.
T

Our 4 yr. old dd loves to climb in with her 8 and 10 yr. old brothers who sleep in bunk beds. I see absolutely nothing wrong with it. I wouldn't worry about a 6 and 7 yr. old sleeping together either, especially considering their background. They're so little, and it makes them feel safe and secure. What is wrong with that? I think that because we adults are bombarded with so much sexually charged material daily through the media that we forget a bit the innocence and purity of children. I'm more concerned about sending a confusing message that discourages affection between our children. I simply don't see the moral danger in my children sharing a bunk while watching a video at bedtime. The alternative of an air mattress or sleeping bag for a sibling who insists on their own space seems perfectly reasonable to me.
J

My DD (8) and my DS (5) share a bed on vacation. I don't have any problems with it except I can't get them to actually sleep. They either argue over who is taking more of the bed or sit and giggle.

Eventually, they fall asleep and are fine. I just have to work harder at it than I do at home.

We used to have me sleep with her and Dad sleep with him when he was very little and we were afraid he would roll out of bed. But we never got any sleep because they always want to be touching you! Eek I hate that. So, as soon as he was big enough - like 2 - we had them sleep together.

I envision that they will share a bed for quite a while yet.

As a kid we used to sleep, me with my mom and my DB with my dad on vacations and that worked out fine

...but in my family now, I have 2 DD's and a DS. The DD's are going to be 2 and 4 on our next trip and we are *hoping* they can SLEEP in the same bed. They are excited about trying this, but I am afraid they won't actually sleep!! So just be cause it's convenient doesn't mean it will work *sigh* If they won't sleep, we'll have to try one withme and one with DH, but we'd like them to be able to share the bed.

DS will be in the crib and/or our bed...haven't thought past the pint when we is older than 2 or 3. Although, for WDW, we could stay at POR with the trundel for DS or maybe 2 ALl Star roomes...we'll see.

Good luck.
You must log in or register to reply here. 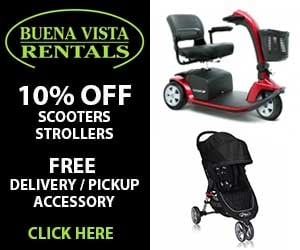