we also drive from WI to Disney. We live on the other side of the state so it adds about another 3 hours on for us. Hmm haven't tried the drive with our 2 dogs however. uuhh better watch it if my kids see that they might get ideas.

Enjoying the trippie so far can't wait for more.

I love the picture of the navigator showdown. You're so lucky to have dogs. middlepat won't let me get a dog.

PS- Did I mention I want a dog?

mickeystoontown said:
I'm in! I often say trip reports and pictures are what keep me sane until my next Disney vacation. Thanks for your contribution to my sanity....I need all I can get.

Your kids are adorable as are your doggies.
Click to expand...

brewcrew80 said:
very cool. i live in Green Bay, and I just started toying with the idea of driving for my trip in March. We have a daughter that will be 2.5 at the time. those dvd players are the best.
Click to expand...

I was born and raised about 40 minutes from Green Bay. Just west of Appleton, in Dale. I don't know if we got lucky, but the drive really was much better than we had expected. We had our entire DVD collection along, along with some new ones that we surprised the kids with.

Disneymoon09 said:
Haha i love the Disagreement with the navigator picture. best picture ever!

Based on depressed look on Pepper's face a few minutes later, I'd say Bambi came out ahead on that one. 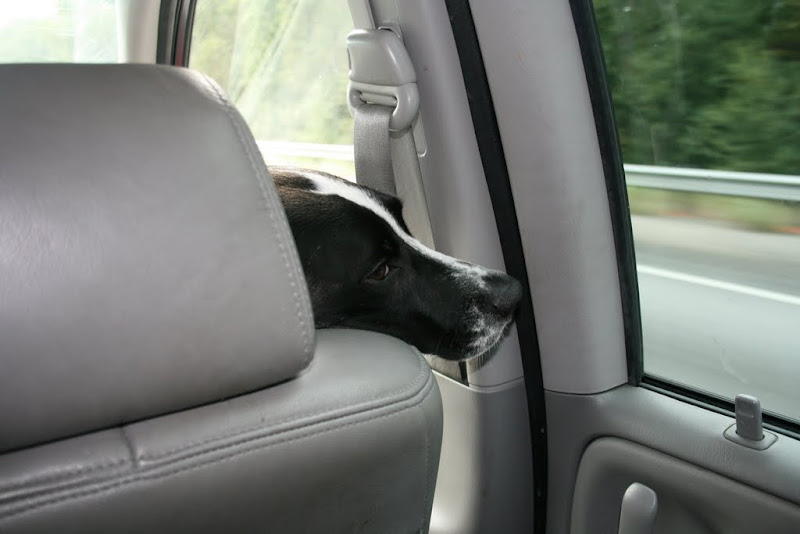 zuperdaave said:
you're off to a great start...looking forward to the rest!
Click to expand...

I've got 2 weeks worth of material. I hope you're comfortable! Welcome aboard!

luckylady said:
Brave man you are. 20 hours in the van with children and wife.LOL Sounds like a great drive tho. Waiting for more.
Click to expand...

We were suprised at how good it went. I've got to give credit where credit is due - Bambi's planning really got us through.


that's nice said:
I'm here too! Now i need to go and read the first update!

Thanks for posting your trip report, staying tune for more...getting excited 'cause we leave in 3 weeks!!!

Thanks for reading and have a great vacation!

praisehisname said:
I'm so excited to read about your trip! My first EVER trip to Disney World was a road trip in a Toyota Corolla with a 4yo, 2yo, and me 6mo pregnant...

That experience alone almost ruined Disney for me!

I can't imagine making the trip in a car. It was sooo nice being able to move around a bit and have room to stretch. Thanks for reading along!

Yes you did! That was Bambi's idea - put the kids in the back seat with the Cheese Balls between them. She's so smart.

we also drive from WI to Disney. We live on the other side of the state so it adds about another 3 hours on for us. Hmm haven't tried the drive with our 2 dogs however. uuhh better watch it if my kids see that they might get ideas.

Enjoying the trippie so far can't wait for more.

Shhhh... I won't tell them. Would the "other side" of the state be anywhere near La Crosse? Bambi and I went to college there. I loved that area.

I love the picture of the navigator showdown. You're so lucky to have dogs. middlepat won't let me get a dog.

PS- Did I mention I want a dog?
Click to expand...

That guy really burns me.

I'll talk to him and see what I can do.

I'll talk to him and see what I can do.

The dog pictures are great!

And you are obviously an experienced family road tripper. You got all the essentials: DVD player and cheeseballs!
D

Clearly, the sand is getting to you.
Click to expand...

You're done dude, you lost, sorry---I don't make the rules, I just enforce them


I love the disagreement pic...my Golden gives me the same look--I always win, my wife always loses, so she plays the odds

You got lucky in "Hotlanta"...it can get ugly, but HOV lanes can save you...and you're right it's a lot of Georgia between Atlanta and Valdosta/Lake City, FL.

I used to have to go Atlanta all the time, I would cut across the state to Tifton on US 82, then 75 to Atlanta---good lord was I ready to get there when the drive was over

Great updates, I can't believe the kids took those booster seats for that long...my two year old would be demanding freedom after a few hours

OK, here's what you do. Go to your local humane society and get the biggest, uglyest, slobbery-est mangy old mutt that they have. Bring him home and present him to your wife. If all goes well, she'll be begging you to return him. If not, well, you can always win the "uglyist dog in the neighborhood" contest.

And you are obviously an experienced family road tripper. You got all the essentials: DVD player and cheeseballs!
Click to expand...

We've done a few, but never more than 6 hours until this trip. Believe it or not, that tub is still 2/3 full sitting on the counter at home. Then again, that is a LOT of cheeseballs!

<-The DIS needs a Cheeseball smiley.


DisneyFed said:
Great updates, I can't believe the kids took those booster seats for that long...my two year old would be demanding freedom after a few hours

That was one of our big concerns too. Evan is still strapped in with the 5 point harness, Madison uses the van shoulder belt. Both are comfortable in their seats, and we make sure to keep them well entertained.

I know I'm disappointing a lot of you who are looking for a Disney Trip Report. Trust me, it's coming. And good stuff, too. Today is Saturday, and our first day in the parks isn't until Monday. We planed in a few days of down time right after our arrival just in case the drive took a lot out of us.
Both of Bambi's parents had to work today, so it was a nice, lazy Saturday.

We've all probably seen them running around Disney, but the little geckos were everywhere around Grandma & Grandpa's house. One snuck in and Allie cornered it, allowing Madison to get a capture. After some scientific observation, he was released back into the wild. 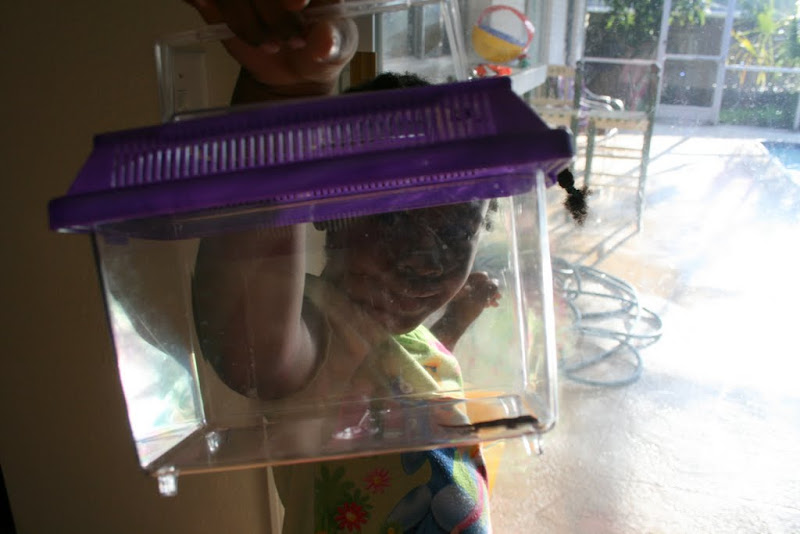 Here's one crawling on the screen around the pool 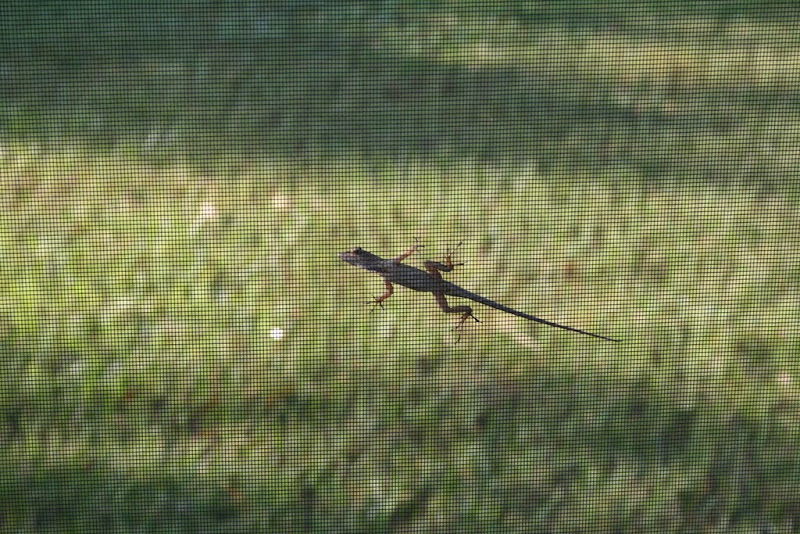 You noticed the bikes on the back of the van, right? Well, today they got their "use". Madison didn't want to go for a ride, but Evan did. We went out to the garage, put our helmets on, and set off down the drive way. It was around 10am, and probalby already in the 80s. We literally rode past the neighbor's house when Evan announced that he was hot and wanted to go back. That's it. We brought the bikes 1200 miles and rode for a total of 175 feet. The bikes would not be touched again until it was time to load them back up.

And since it was so hot, what else could we do? 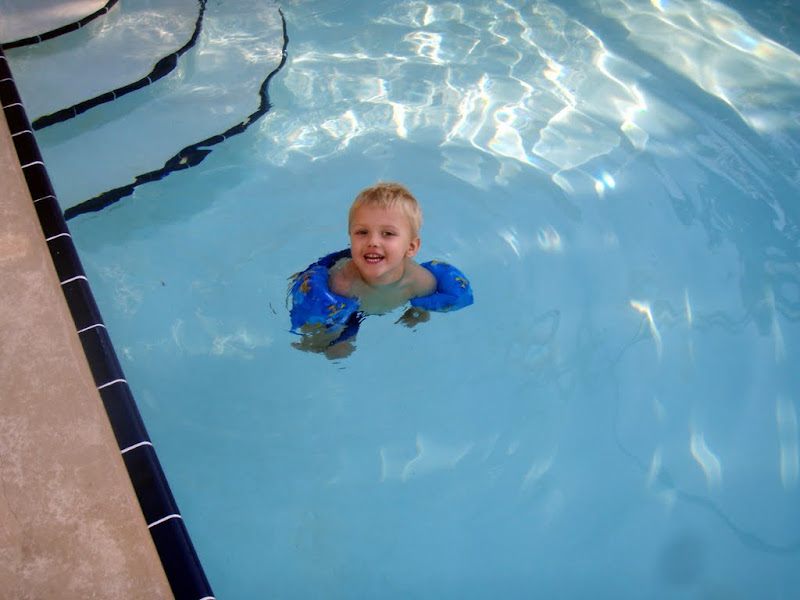 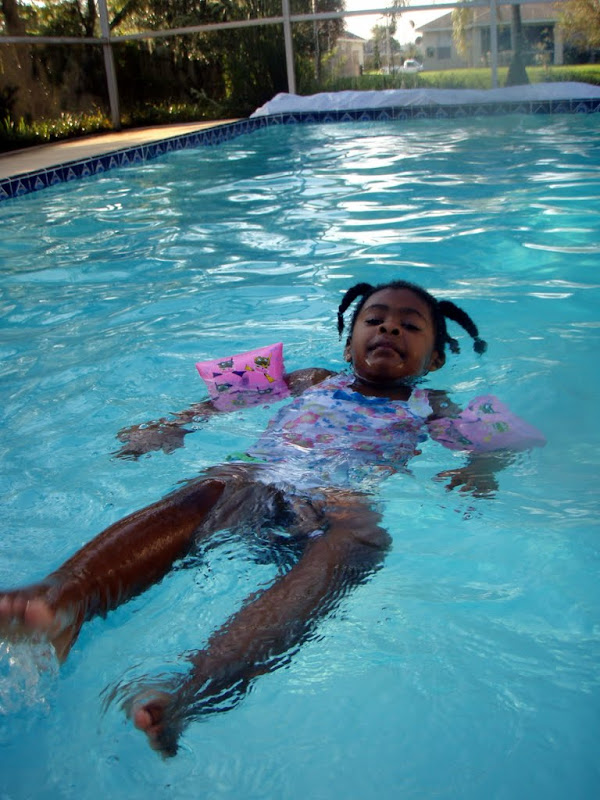 It took them a little while, but they did get comfortable enough to start jumping in 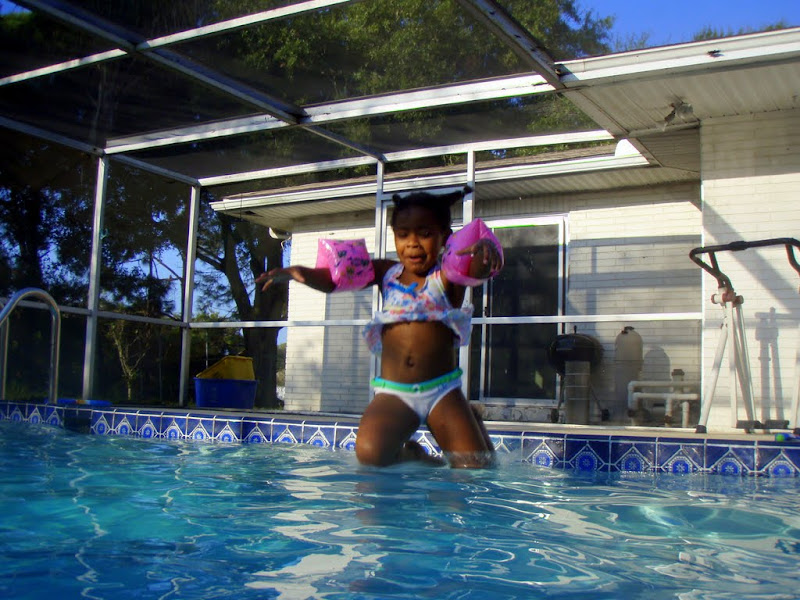 And when jumping in wasn't enough, they wanted things to jump over 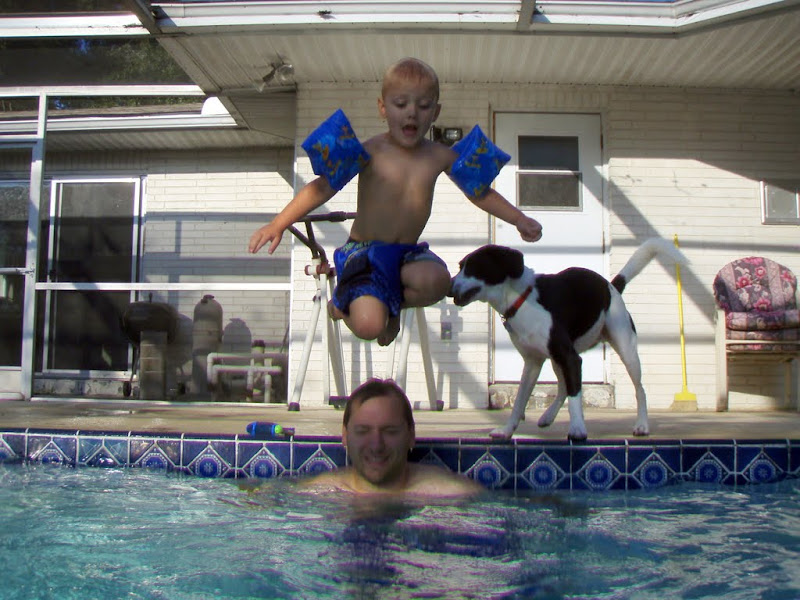 A little playing with the underwater camera 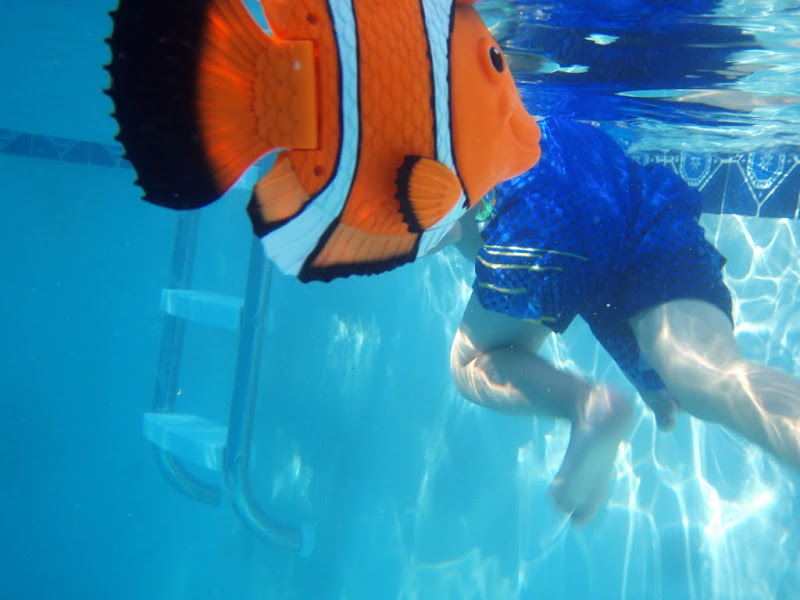 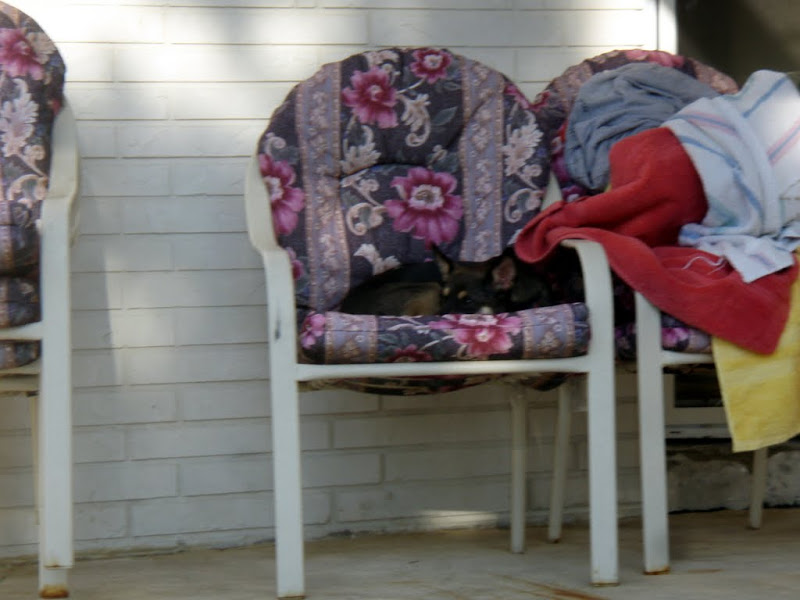 The lizards were driving her crazy too. Here she is stalking one. It's very hard to see in the picture, but it's in the top "pane" in front of one of the small trees 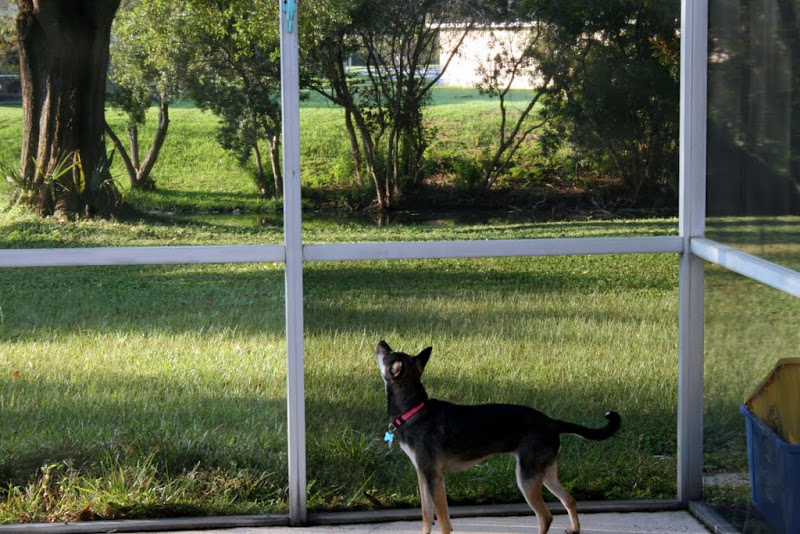 I realized I didn't get a very good picture of it, but there is a lagoon at the back end of the property. You can kind of see it in the above picture. It's about 20-30 feet wide, and constitutes the property boundary. Bambi's parents have lived in this house about a year, and the neighbors claim to have never seen a gator in there in like 30 years. Never the less, the saying in Florida is "if there's water, there's gators" and we were nervous since Pepper loves swimming. Luckily, he and Allie didn't have much interest in this water. They were probably glad to be out of the van and running. The first time they went near it, I gave them a good strong yell to warn them, and for the most part they ignored the water the rest of the vacation.

We did a few errands around Lakeland that day - grocery shopping, Walmart, etc. Nothing exciting. Ate lunch at Steak & Shake. Mmmm...shakes.
Facebook, 10/10 3:25pm: After we arrived yesterday, we went swimming. After dinner we went swimming. This morning, swimming. Nap time now, but oh, what to do when everyone else wakes up? 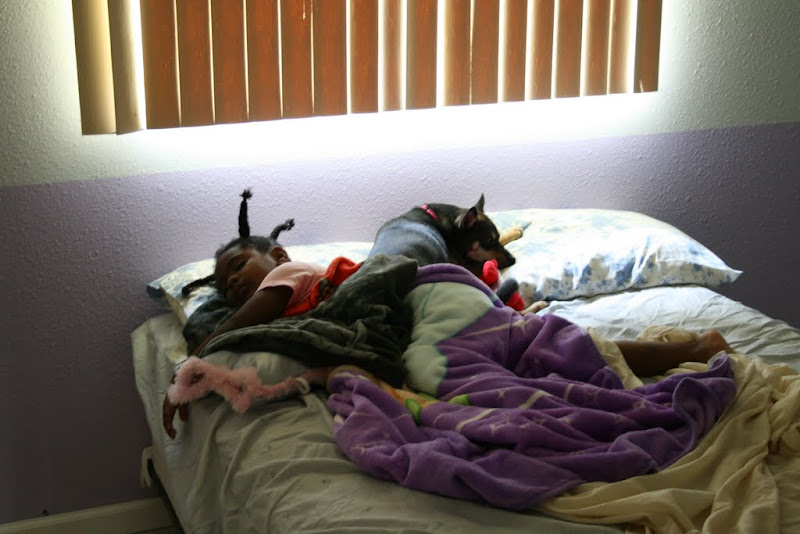 After Grandma & Grandpa got home, it was time for some early birthday presents for the kids. We purposely didn't pack too many toys, since we know they would be getting some down here.

They didn't have time to wrap them (did I mention we made very good time on the drive down?), so we made the kids close their eyes. (Also seen in this picture is their bulldog, Alex 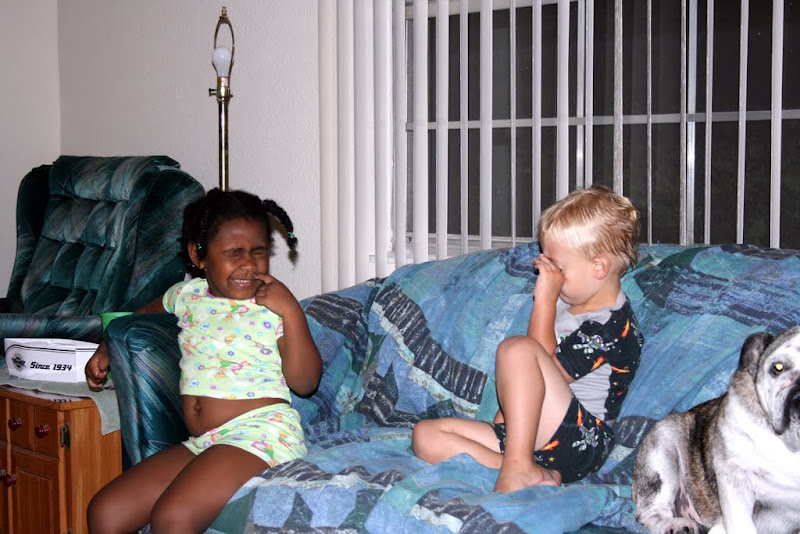 Evan got a working Monorail, and Madison got a Cinderella Castle play set. 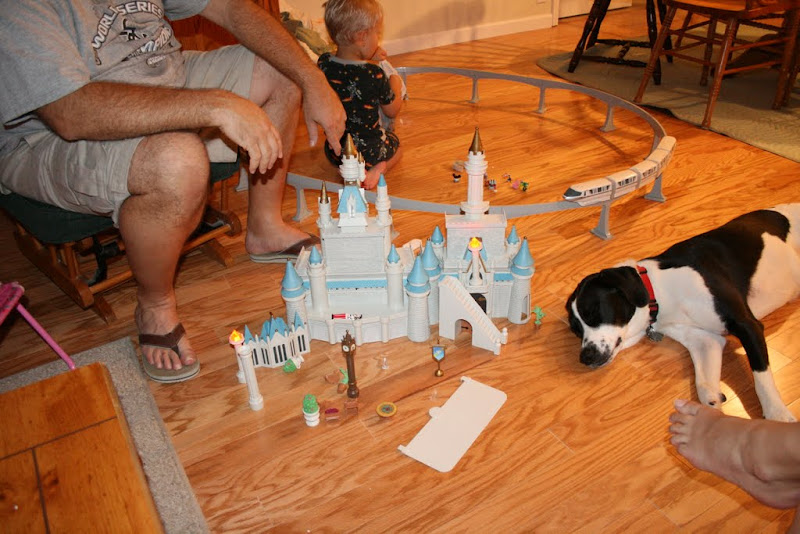 It didn't take Evan long to find out that the battery operated torches from the Castle play set lit up his mouth, too. 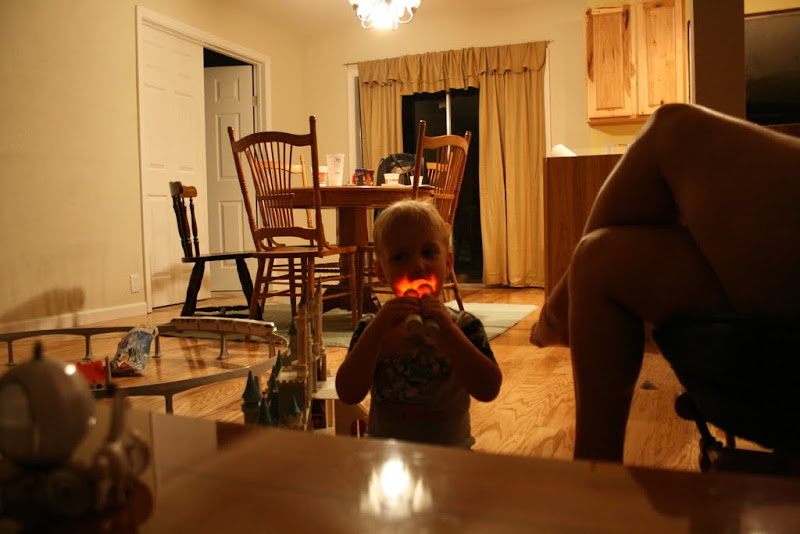 In the next update: The first foray onto Disney Property!

This TR is great! Subscribing.

Great update!! Our trips always start with family time since my DW's cousin and grandparents live close to Orlando. We love searching for geckos too. Why do they always like climbing up screens?

The kids looked like they had a great time in the pool too!

well at least its a lizzard and not a snake!

FreezinRafiki said:
Think I'll finish mine before you finish yours?

What a great day of relaxing and unwinding from the drive!

FreezinRafiki said:
OK, here's what you do. Go to your local humane society and get the biggest, uglyest, slobbery-est mangy old mutt that they have. Bring him home and present him to your wife. If all goes well, she'll be begging you to return him. If not, well, you can always win the "uglyist dog in the neighborhood" contest.

I wouldn't turn away the dog! I kept Middlepat after all!

Based on depressed look on Pepper's face a few minutes later, I'd say Bambi came out ahead on that one.

Her face also says
" I lost that round please be nice to me and give me a cheese ball or two or three...

no your not!!! just go down to the spca and get a dog.i have learned along time ago 2 words, yes dear!! and it made my life alot easier. for as long as there is no dog, she will allways have the last word,"well, you wont let me get a dog"!! they are great, feed them and rub there belly and they will love you forever!!!! almost like my wife has me trained.

Subscribing!!
Great pictures and I love the dogs!!

Um well kinda there we are actually on the Iowa/ Illinois border. 10 minutes either way & you can be in a different state. Platteville area. We have tried for years to catch a gecko. hmmm maybe we should take the dogs next time. Reggie & Val might corner one for us. That pool looks wonderful.
You must log in or register to reply here.
Share:
Facebook Twitter Reddit Pinterest Email Link