This is my first trip report, and for some reason, I'm having a hard time starting it. We've been back home for just over a week now. I've poured over my pictures, selecting just the right ones. Every time I came to the TR board, I would start reading one and get too involved to start my own. Well, I finally made the time and started. Welcome aboard! (Table of Contents has been added at the bottom of this post!)
2 kids, 2 dogs, 1200 miles: 2 weeks and 2 birthdays in Florida
First things first, introductions are in order.


So, you have the "who", here's the rest of the facts:
WHERE: MIL and FIL's house, Lakeland, FL, and Disney's Beach Club Villas. We are DVC members and have stayed here in the past. You can't beat this pool anywhere on or off property. It's amazing.
WHEN:October 9 - 24, 2009
HOW: Mazda MVP Van. 1200 miles each way. First time driving.
WHY: Um, why not? Officially, it was to visit Grandma and Grandpa and Celebrate Madison's 5th and Evan's 3rd Birthdays.

So, that's my introduction. In upcoming chapters, I'll spin the tales of the 2 kids, 2 dogs, 1 minivan drive, the parks, the pools, the food and the fun. Pictures will be included. I have over 1300 from the vacation, and the best of the best have been selected for this TR.

Hold on, it's gonna be a heck of ride!

Looking forward to hearing about your trip

I'm just not so sure how well this plan was though

Hopping on for the ride!

Sign me up for the story. (I'll need a good template to write up mine in a couple weeks).

This is NOT A TaG

Here! Bring it on

teacher2525 said:
Looking forward to hearing about your trip

itJeff said:
Hopping on for the ride!

Please keep head, hands, and feet inside the ride vehicle at all times.

middlepat said:
Sign me up for the story. (I'll need a good template to write up mine in a couple weeks).

Template? Heck, you can copy & paste and just change the names if you want!

Think I'll finish mine before you finish yours?

DisneyFed said:
This is NOT A TaG

Clearly, the sand is getting to you.

DisneyDaddy-O said:
Here! Bring it on

I probably won't finish before you leave for the cruise, so I strongly suggest springing for the satellite Internet connection so you can keep up. Or just finish you get home. Whatever.

Good to have you on. Day 1 will be posted shortly!

As I said before, we've been to Disney World a few times. But we've always flown. Once from Chicago, but mostly from Milwaukee. It sure is convenient living 30 minutes from one airport and 60 from another.
We've been there twice since we got Pepper, and both times we would have the teenaged son of one of our friends stay at the house with him. The problem is, Evan and I (and to some extent Bambi's Dad) are about the only males that Pepper trusts. [Side note: remember that last sentence. It's a bit of foreshadowing.] Something must have happened to him before we got him, because he is very scared of men. So 2 weeks like that probably wouldn't be a good idea. We looked into a boarding kennel, but 2 weeks for 2 dogs would be major $$$. Add in the cost of 4 airline tickets, and we're already majorly in the hole for this vacation.

Bambi had been dead set against driving. 20 hours in the car was way more than she ever wanted to deal with. That's why I was so surprised when she brought up the idea of driving. We ran the numbers, stared at the maps, crunched the numbers again, agonized over it, and then decided to drive. With 2 kids, 2 dogs, and 1200 miles from Wisconsin to Florida, were we crazy? Only time would tell.

We researched like maniacs. What route was best? What time should we leave? Should we plan a hotel stay or drive straight through? How in the heck are we going to entertain 2 kids buckled into car seats for that long? And on top of all that - Labs and Cattle Dogs like to run. A lot. There's really not much room to run in a minivan.

Our chariot for the vacation was a 2000 Mazda MPV. It didn't have a built in DVD system, so we bought an RCA model at Sam's Club for $180. It had two screens. Each could play its own movie, or they could be hooked up together to show the same one. The biggest problem was the power in the van. Whenever the key was turned on or off, the power would interrupt. Meaning every time we stopped for gas, the movies would shut off and we would have to load them up all over again. I solved this with some creative wiring and additional power jacks from my local auto parts store. Hook them directly up to the battery, and they never lose power. I was having so much fun, that I added another one up front for the GPS.

We had two big things in our favor on the vacation - washers and dryers. Both at the in-laws house and at our 1 bedroom villa a the Beach Club. Which means for a 2 week vacation, we packed only about 4 outfits each, drastically cutting down the amount of stuff we had to pack. 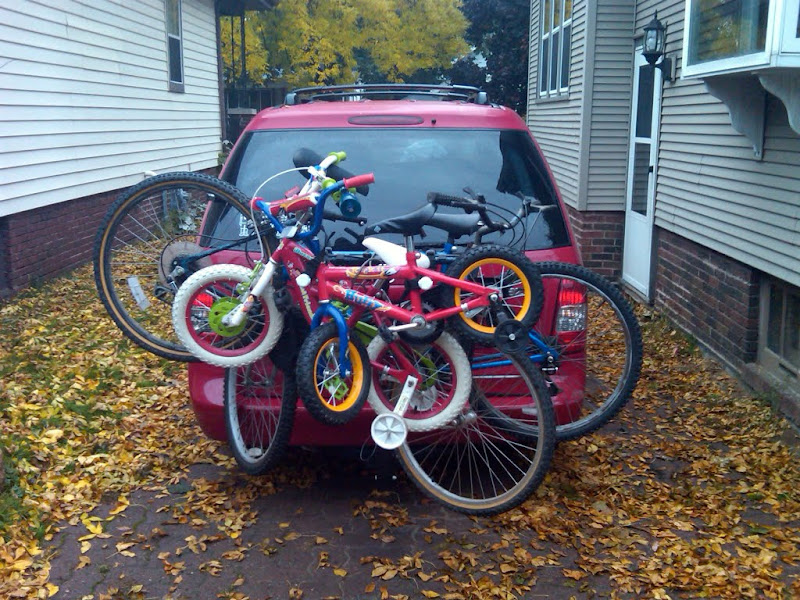 Unfortunately, we hit Chicago during rush hour. 10-15 mph around the city and I was in a sour mood. It cleared up on the south side and we were doing OK until we got to the I94/I65 interchange in Indiana. The exit was backed up for over a mile. Not sure why, either.

I was posting to Facebook via my Blackberry so family and friends could follow the trip and see that we were still OK. 10/8 8:15 PM - "gas station in northern indiana for potty & jammies"

With the gas tank full and the kids now changed into PJs, we set out again on I 65 South. Bambi took over driving south of Indianapolis. She had slept some and was refreshed and ready to go. Facebook: 10/8 11:59 PM : 30 miles north of Louisville, KY. heavy rains. it's starting to let up a bit, so we press on. I took over again in Kentucky after a nap. Somehow I kept it on the road and away from the National Corvette Museum in Bowling Green. The fact that it was 1 am and closed helped too.

I was on a roll. Some podcasts on my iPod and a little Mountain Dew in the cupholder was all I needed.

Facebook, 10/9 5:23am: rest area just west of Chattanoga, TN. I'm sure Tennessee is beautiful country, but driving through it at night, an all you see is the outline of this hugh mountain, you really miss a lot. the 5% down hill grade with twisty turns north of Nashville was fun, but I could have done without the crosswinds and the rain. Bambi and the kids are sleeping. I had a two hour nap in Kentucky and I'm feeling good.

That rest area is where I found this bench. That looks like one happy lizard. 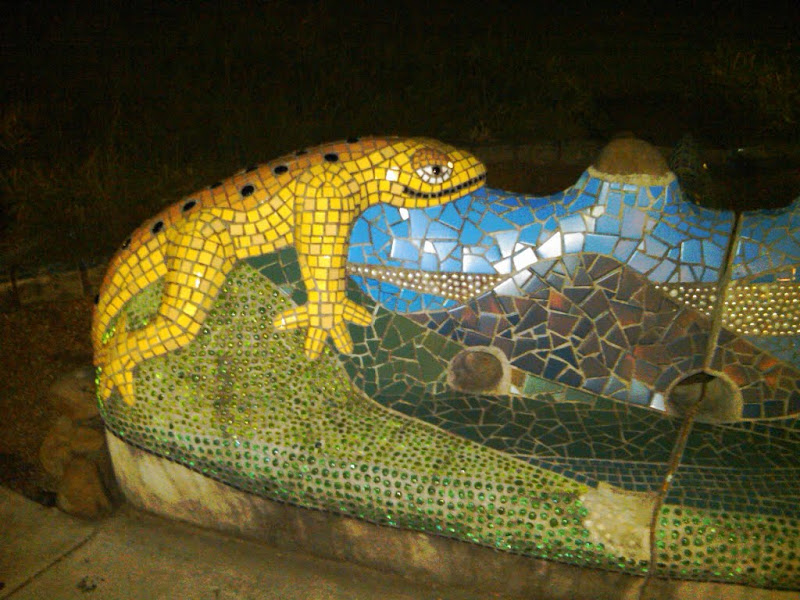 We were making great time. We weren't sure if we were going to stop for the night or not, but since we were sleeping OK in the van we never needed to. Pepper and Allie were fine too. They would curl up (or stretch out) and sleep right along with us.

Our biggest concern was Atlanta traffic. We though if we stopped for the night around Chattanooga, that we might hit evening rush hour.

After after a nice stop to change clothes (shorts!) and get some breakfast we were back on the road. We hit Atlanta about 9:00am, and took the I 75 HOV lanes right threw downtown. We never went below 50mph through town. We were very relieved, because we have heard very bad things about Atlanta's traffic.

This was south of Atlanta somewhere. Bambi had taken over driving again. Mmmm...big tub of cheese balls... 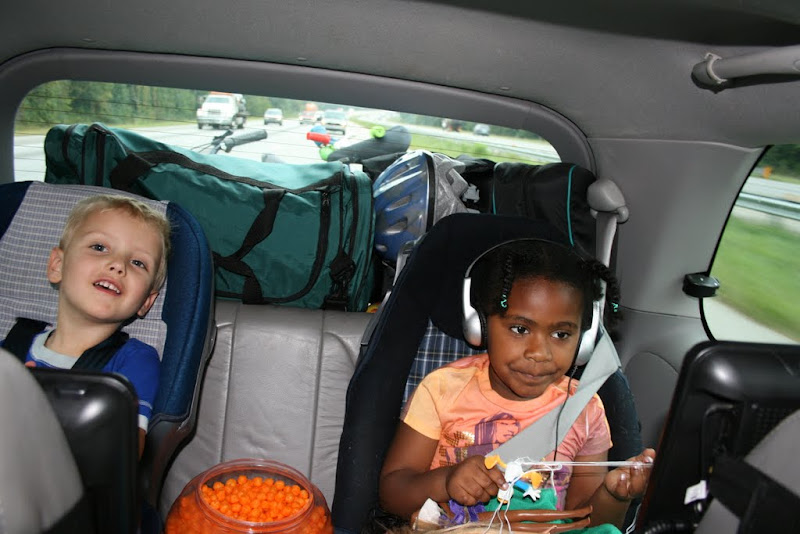 And one of my favorite pictures from the trip. I have entitled it "Disagreement with the Navigator" 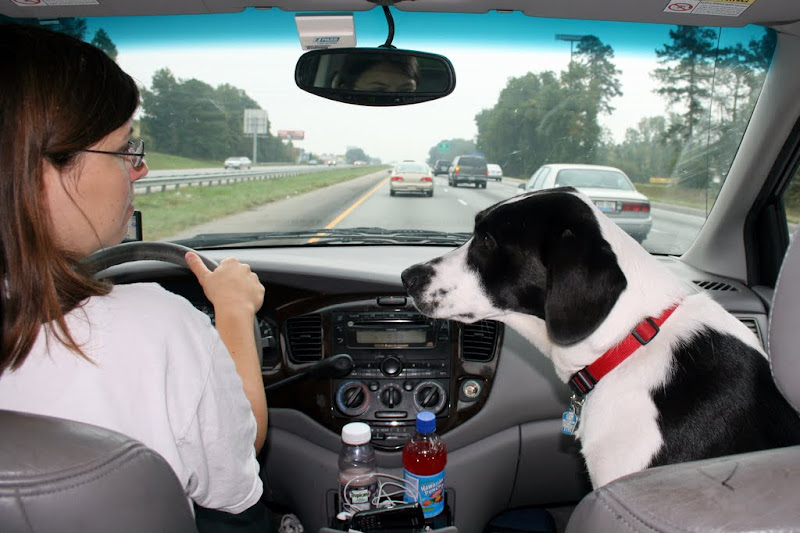 The rest of the drive seems like the longest. After Atlanta, you still have a lot of Georgia and Florida to drive through. I'll let Facebook tell the story:

Facebook: 10/9 12:33 pm: In Florida. Kids and dogs have done very good on the trip. 3 hours to go then swimming. (Swimming is at Grandma and Grandpa's pool. And thank goodness, after 19 hours in the van, we're starting to smell a bit ripe!)

We arrived before Grandma or Grandpa got home from work. We had made it about 8 hours ahead of schedule since we didn't need to stop. They told us where they hid the key. I'm not going to post the location here, so PM if you want to know. 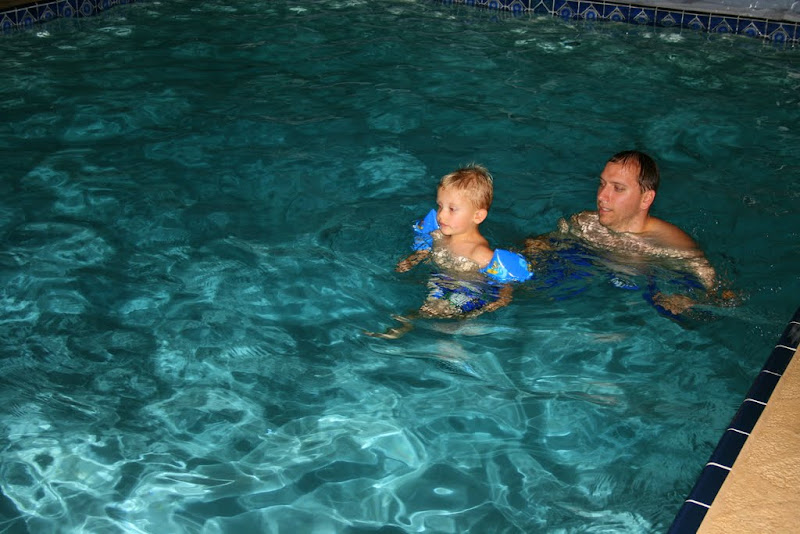 After that, it was time for some well deserved sleep in an actual bed!

I'm in! I often say trip reports and pictures are what keep me sane until my next Disney vacation. Thanks for your contribution to my sanity....I need all I can get.

Your kids are adorable as are your doggies.

very cool. i live in Green Bay, and I just started toying with the idea of driving for my trip in March. We have a daughter that will be 2.5 at the time. those dvd players are the best.

made the drive from Green Bay to Columbia, SC to visit my brother last March. It went ok....but, this would be 6 hours longer.

I'm just not so sure how well this plan was though

FreezinRafiki said:
And one of my favorite pictures from the trip. I have entitled it "Disagreement with the Navigator"

Haha i love the Disagreement with the navigator picture. best picture ever!

you're off to a great start...looking forward to the rest!
L

Brave man you are. 20 hours in the van with children and wife.LOL Sounds like a great drive tho. Waiting for more.

I'm here too! Now i need to go and read the first update!

Today is the best day of my life!

Glad the drive went so well. We drive a LOT from WV--DH can't stand for someone else to be in control, not even an airline pilot LOL (although he doesn't seem to have any problem relinquishing the wheel to ME...hmmm...).

My dad makes this drive back and forth from Madison to Florida every spring and fall with his motorhome...it's a doozy!

Thanks for posting your trip report, staying tune for more...getting excited 'cause we leave in 3 weeks!!!

I'm so excited to read about your trip! My first EVER trip to Disney World was a road trip in a Toyota Corolla with a 4yo, 2yo, and me 6mo pregnant...

That experience alone almost ruined Disney for me!