Tonight I took my kids out to dinner (Old Country Buffet) since my DH is working late. A lot of you know that my 4 1/2 year old Luke has a HUGE knowledge, respect, and love for our military. When you ask him what he would like to be when he grows up, his answer since he's been 2 was always "A Marine" now since he saw the airshow last weekend his answer is "A Marine and a Blue Angel Pilot"

Well...tonight he wore his cammo outfit. His outfit is axactly the same as any military persons fatigues complete with little black boots and his United States Navy hat. He had his USMC t-shirt on with it also.

Well...while I took him up to the buffet a group of people were up there also getting their food - they looked at my son and stopped dead in their tracks. The one woman (about 35-40 years old) turned to him and said "why on earth would your mother dress you in that ridiculous, innapropriate outfit?"

Innapropriate? Ridiculous? What is so innapropriate and ridiculous about it? All I said was "he wears it because he wants to be a Marine when he grows up" and gave her my evil mom glare.

Usually when he wears this outfit (which is quite often) he gets compliments and people say how cute he looks.

I felt so sad for him...fortunately, he didn't fully understand what she said cause he asked me what she meant. I just convinced him that she thought he looked really handsome and cool.

How could this face offend anyone? 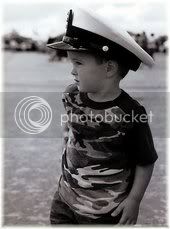 Wow what a... nevermind.

BUT OH MY GOODNESS YOUR CHILD IS ADORABLE! -faint-
M

I will never know why people feel the need to be so rude.

Your son is absolutely adorable, and I love his fatigues!!!
C

your son is so adorable!! That woman was a witch ~ plain and simple. There is no reason to say that to a little boy just as it would be inapropriate to say it to a little girl dressed in a princess costume. Good for you for sticking up for him and good for him for wanting to be marine when he grows up!
T

Sorry for the size of the picture...I'm trying to make it smaller

The woman is a bully. Any adult that would make a nasty, passive aggressive comment to ANY child when their accompaning adult/parent is right there is nothing but a bully picking on someone that isn't able or capable of fighting back. I bet she wouldn't make a comment like that to any of the military men or women who may enter the restaurant at any given time.

I defintely would have addressed your son and said something. I would have said, "Well if you aren't the cutest thing I have ever seen!!!!!!!!:

<font color=green>Holy smokes, the DIS is a big pl

Your son is absolutely adorable.
As for that woman (using term loosely) I've got words for her and none of them are appropriate for this board.
F

Well, I undoubtedly would have thought the same thing, but I would never have said it out loud!
T

FayeW said:
Well, I undoubtedly would have thought the same thing, but I would never have said it out loud!
Click to expand...

Why would you have thought the same thing?

Transparent, I am curious in this answer too.
E

What a cute little marine he is!

Honestly, some people are just morons. I wonder what this idiot would do at WDW where kids wear all kinds of outfits all day long...

FayeW said:
Well, I undoubtedly would have thought the same thing, but I would never have said it out loud!
Click to expand...

LindsayDunn228 said:
Transparent, I am curious in this answer too.
Click to expand...

When I was little all the little boys I knew I wanted to be soliders. They played soldier and army and loved wearing the same kinds of outfits as military men.

This is a small child we're talking about. Not a grown adult wandering around in a costume pretending to be an occupation that they are not. I don't see what is innapropriate or strange about it.

I mean what if he just wanted to wear fatigues so he could look like Daddy? Would she have a problem with that too?
L

What a very not nice person. Good for you for standing up for your son.

I'm not good with comebacks.

He is so cute!

I can't imagine why anyone would say that to him!
I think I would have had to stop myself from giving him a big hug!
I am so sorry that that woman said that!

I think he looks way too cute!! & I know a few Marines who would love it if they saw him!!!( I won't let my sister see this picture. It's her goal to be a Marine then join the FBI. If she see's a full uniform in a small size she'll drive me crazy till I get her one

It takes all kins in this world, Heather. Your son will ne a Marine someday. And as said, he is so cute.