Raya said:
Happy Wednesday! Any advice on time management to get your exercise in? My new goal is 10,000 steps a day and a 30 minute workout. For me the 10,000 steps works out to two 40 minute walks, so that's a total of two hours (roughly) each day for exercise. I'm not sure where I have that much time in my life.... but I need a few inches to come off to fit into Space Moutain post Covid.... so it's got to happen.

I think breaking your walks into two shorter walks is a good idea. When I was a child, I lived part time with my grandparents, and we would always go for walks after lunch and dinner. I loved that routine, and I wish I could incorporate that into my life now. If needed, could you also break the 30 minute workout into smaller chunks? Maybe a 15 minute strength training session and, later, some sort of cardio for 15 minutes?

A good chunk of my minutes is built into my lifestyle. Owning horses means I have to be active most days. Beyond horses, I have to sometimes force myself to get up and do other things. That's why my goal this year is to try other fitness activities. I noticed my strength is declining as I'm getting older, and I don't want it to get worse. So I ride, work with, or take care of our horses earlier in the day, and then I walk or do fitness videos in the evening. I'm not a morning person, so a workout first thing in the morning would be torture for me.

piglet1979 said:
We are still keeping an eye on them as DH (also got Pfizer) had a delayed reaction with both shots. He got a fever 1.5 to 2 weeks after each shot.
Click to expand...

DS also had a delayed fever after his second Pfizer (not by as much, though, just a few days.)


Raya said:
Any advice on time management to get your exercise in?
Click to expand...

Just doubling up where you can - walking to the store, or when you're waiting for someone, listening to podcasts or books while you walk...that sort of thing.

Sometimes it's also helpful to budget your time as 168 hours/week, rather than 24 hours/day. Maybe some days you won't have time for as much walking, but you can add in a little on the weekend to make up for it.

Hi everyone! I had eye surgery last Thursday so I'm not really back to reading the computer screen yet.... I don't want you to go without some super hero wisdom, so here's another Hawkeye quote... 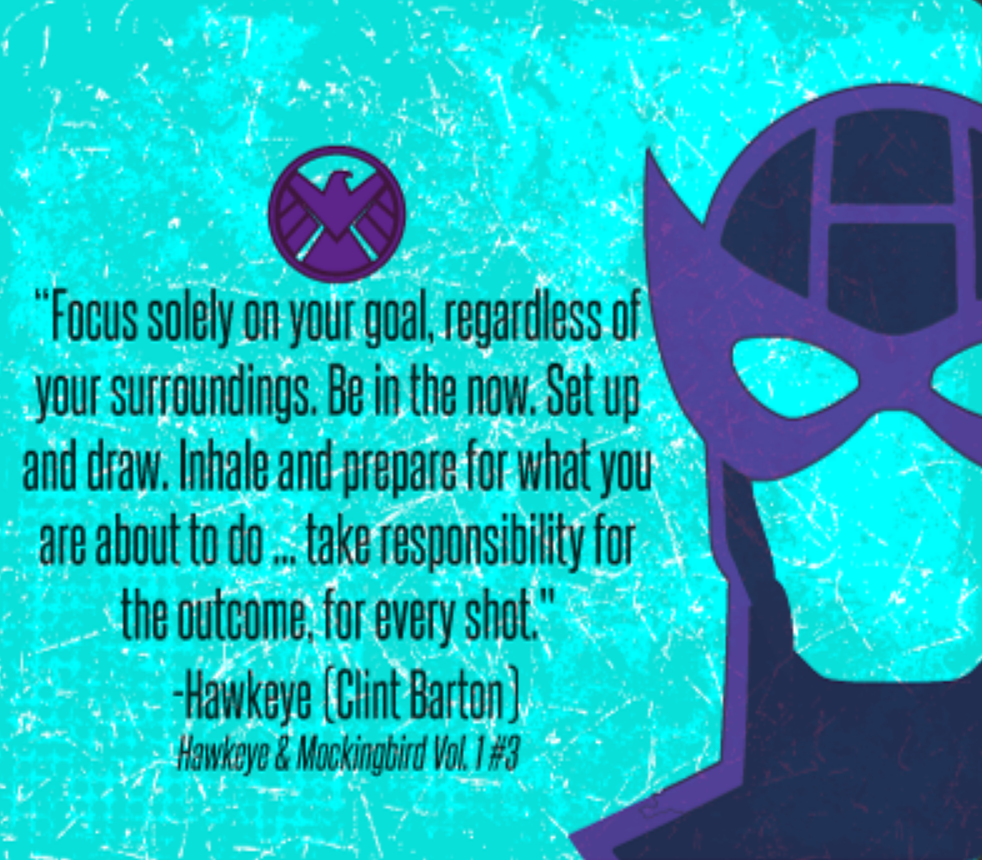 Wishing you a speedy recovery, Raya!

Raya said:
Hi everyone! I had eye surgery last Thursday so I'm not really back to reading the computer screen yet.... I don't want you to go without some super hero wisdom, so here's another Hawkeye quote...
Click to expand...

I hope your eye heals quickly and your not in too much pain.

Good morning, everyone! How are y'all doing as we end up our last week? You look at little blurry... but that's probably just me.

We have some big moves this week!
Let's celebrate ljcrochet who beat her goal of 300! Way to give it 110%!!


Now we had a request for Captain America. Look I could gush about this hero for paragraphs but let me sum up - the child of an immigrant, with diabetes, asthma, and a million other illnesses, who grew up kind and compassionate - he turned into an even bigger hero after taking super serum. Some fun facts: Cap is Catholic and one of the few superheros to go on record as being religious. His mom was a nurse. His dad died in WWI. He's an artist and not much of a dancer.

Captain America was created by Jack Kirby, a Disney legend and WWII solider, who happened to be Jewish. There's a great story about some Nazis getting upset that Kirby had Cap punching Hitler. They arrived at Marvel headquarters and tried to start a fight. Kirby finished it.

There's a ton of Cap wisdom out there, but I think this is my favorite piece:

So whatever you decide today, whether it's to give yourself a self-care break or stick with your routine when you don't want to, plant yourself like a tree and say no.

I hope you are recovering well from surgery, Raya!

Hi all - I really fell down on the job the last few days. But I have 90 minutes to add. Not getting in as much walking as I'd like, but the digging and hauling in the garden makes up for it.
@twilightsparkle - your new garden sounds lovely - so many of the plants I'd love to have, but are on the deer menu.
@Raya - hope your vision is back to normal soon! And, I hear. you about getting ready for the rides. Thinking about Space Mountain makes me laugh at a memory- the last time I was on it, I had a hard time getting up at the end - then I was laughing so hard at not being able to get up that I really couldn't get up. The cast members weren't' too thrilled.
@ljcrochet - your stamina going through treatment is incredible!
@piglet1979 - glad your kids did well with the vaccine. I can't want for them to give it to the young ones - my granddaughters are 7 & 3 - I just want them protected!

A few of my favorites. The purple in the background are really the best - Batik - every flower is different! The white ones smell like lemons, and bloom again in the fall.

Hi! Catching my numbers up as well:

(160 new minutes all together)

It's getting down to the wire, heroes! I know it can be hard to keep going when you're at the end and maybe not feeling as ambitous as you did at the beginning of the month, but remember