Since the opening, Disney has utilized a "Virtual Q

For newcomers: there is no need to read the entire thread, posts 1 & 2 contain important information that answer many common questions and maybe reading the most recent handful of pages will help get a sense of current topics being discussed.

This is a NO SPOILER thread - any post containing anything hinting at an attraction spoiler may be removed or edited at the discretion of Theme Parks Attractions & Strategies Board Moderators.

Even simple descriptions of locations and processes are considered spoilers - spoiler threads such as this one are available for discussing the ride if so inclined.

We’re happier than a womp rat in a sand storm about the response we’ve been getting for our newest attraction, Star Wars: Rise of the Resistance. It’s clear guests visiting Black Spire Outpost are enjoying the opportunity to help the
disneyparks.disney.go.com
​
Basic Process Description

Every guest wishing to experience Rise of the Resistance must have entered Disney's Hollywood Studios (DHS) that morning by scanning park admission at the tapstlyes.

To date, Disney has been allowing guests inside DHS anywhere from approx. 30 to 60 minutes prior to the published park opening time.

Exact timing of opening the tapstyles and locations where guests are held inside the park can vary based on conditions that day.

Joining the Virtual Queue (aka, joining a Boarding Group) is done via the Walt Disney World My Disney Experience app on your mobile device. Make sure yo have this app downloaded beforehand. Everyone in your party can have the app.

The Virtual Queue "opens" at the published park opening time. Generally speaking they have been making a park-wide announcement at this time, but it is best to pay attention to your personal clock/watch and not wait for this announcement.

When the Virtual Queue is live, the "Join Boarding Group" button in the app will be red and from there the process of selecting your party and joining a BG is similar to selecting FastPasses in the app.

UPON SUCCESSFULLY JOINING A BOARDING GROUP: you will be given a Boarding Group number which will be "called" at a later point that day. Boarding Groups are "called" via push notifications from the app (if enabled on your device) and you can also track your status easily in the app.

There are numerous Disney blog sites with pictures and videos of this process available for further research. In addition, anyone can "practice" this process each morning at the published park opening time while at home (the app will let you click through various menus but will stop you at the final step since you have not entered the park).

The number of Regular Boarding Groups available to join does vary day-to-day for reasons that are unknown.

However, RotR is prone to operational delays nearly every day, creating variability in the number of Boarding Groups accommodated each day.

Exact regular boarding group and backup boarding group performance is a heavily discussed topic on this thread and tracked in explicit detail in The Chart - SEE POST #2.

Many posters are using this information in order to try to set reasonable expectations for what one may experience on any given day when attempting to ride RotR.

The general advice is to be there before the published park opening, join a Boarding Group, and you have a reasonable chance of riding sometime that day.

There are inevitably parts of this process that are beyond your control and may create ripple effects in your schedule - but being in the park prior to opening, joining a Boarding Group the second it goes live, and having a degree of flexibility in your plans that day puts you in the best position for success.

What if I have app or connection problems?

The app can and will be glitchy at times and data or WiFi service can sometimes be taxed with so many people in the park. Disney has Guest Experience Teams (GET) (blue umbrellas and shirts) set up at various points inside the park that can assist guests. If you run into app or connection issues, take screen shots as able and visit a GET station to discuss.

While many guests won't have any problems and will successfully join a Boarding Group with no issue, sometimes things will happen.

Some in my party didn't show up on my Friends/Family List when trying to join a Boarding Group?

This is an issue that is reported with relative frequency.

If someone in your party there with you that morning does not show up in the app when attempting to join a Boarding Group - immediately join yourself and whoever else you can (if applicable), then head to a Guest Experience Team station for assistance. Do not wait or try to restart the app for your missing party member to show up.

Remember, everyone in your party must have entered the park (GET team members have this information and will not add someone who had not tapped in to the park that morning).

Why don't they start with Boarding Group #1?

They do not start with BG #1 for reasons unknown. Each day the starting boarding group number varies.

Can someone at home or not in DHS help me join a Boarding Group?

Yes, you can have somebody at home or not in the park help you in joining a BG if they are connected to your MDE or by letting them log into their app using your login information. They can only obtain BGs for people who scanned into the park that morning though.

Can multiple people in a party try to join a Boarding Group?

Yes, the more people in your party attempting to join generally helps your chances of quickly joining a Boarding Group and provides backups in case of poor connection speeds, app issues, etc.

What do I Do When I Get a Boarding Group?

Should I use WiFi or Data?

Disney WiFi is available in most parts of the park, but is probably the more risky option given past performance and reliability. Most guests generally report reasonable success rates using data vs WiFi.

Which phone model or carrier is best?

Reports are highly variable and do not seem to indicate any material advantage with any phone, device, or carrier combination.

Can I practice joining a Boarding Group at home?

You can "practice" joining a Boarding Group at home at the published park opening time that day. If you are not in the park, you will not be allowed to finalize the process though.

Does Rise of the Resistance Operate During Extra Magic Hours?

Rise of the Resistance does NOT operate during Extra Magic Hours

How many guests are in a Boarding Group?

We do NOT know how many guests are in each Boarding Group. Several sources have tried to estimate this but it can vary day to day and this information is not released by Disney.

What time does the Skyliner start running and can I use it to get to DHS at park opening?

Generally speaking, the Skyliner has NOT been opening early enough to arrive at or prior to the DHS published park opening. Do not rely on the Skyliner as your mode of transportation. Buses are provided as an alternative.

What time do buses start running from Disney Resorts?

Are restrooms located outside the park gates?

Restrooms are located next to the outside Guest Relations window and adjacent to the Skyliner station.

Can I Join More Than One Boarding Group Per Day? 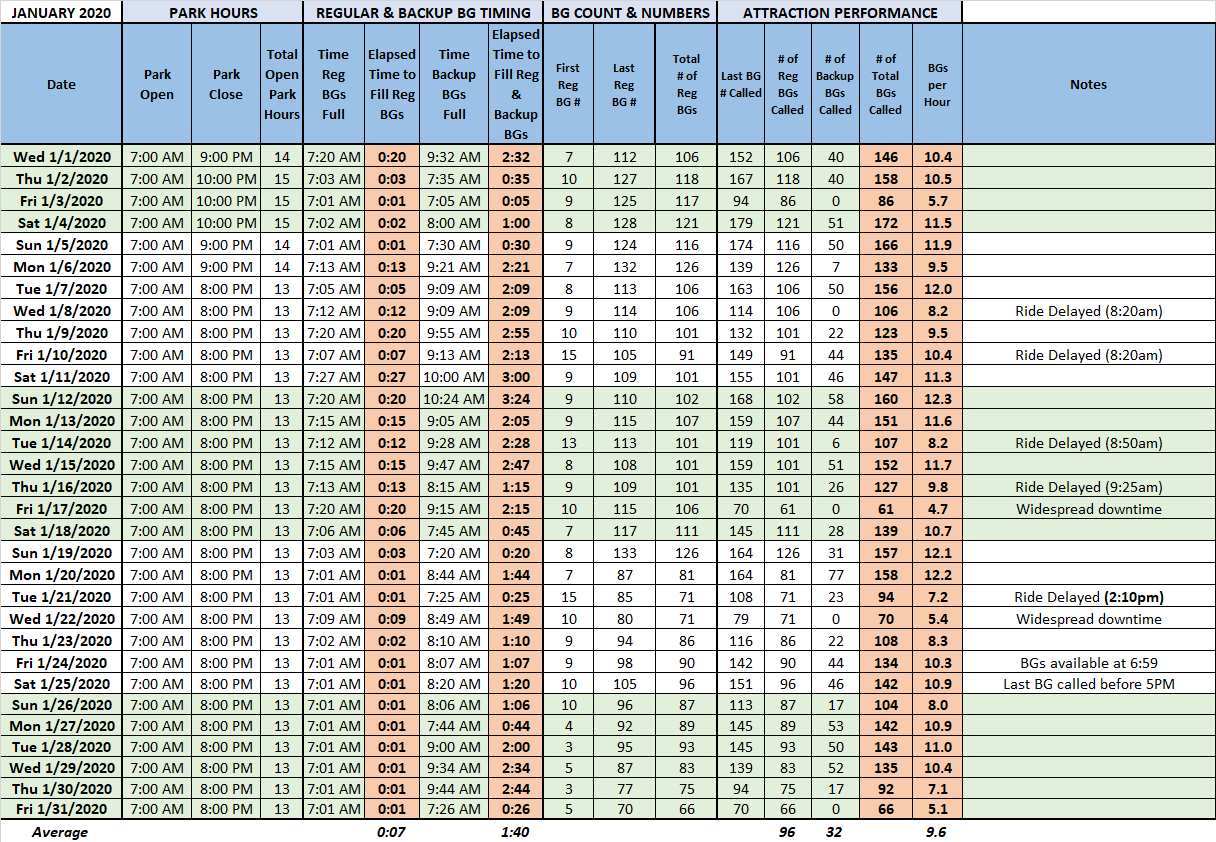 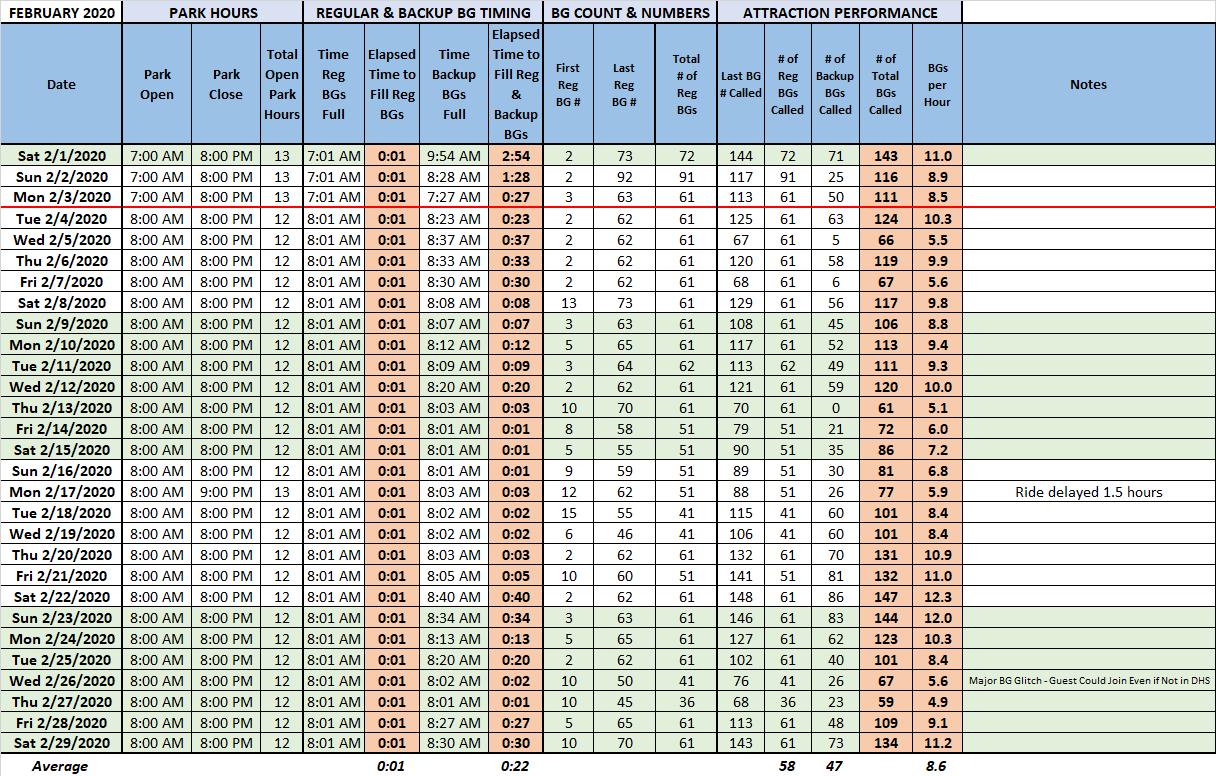 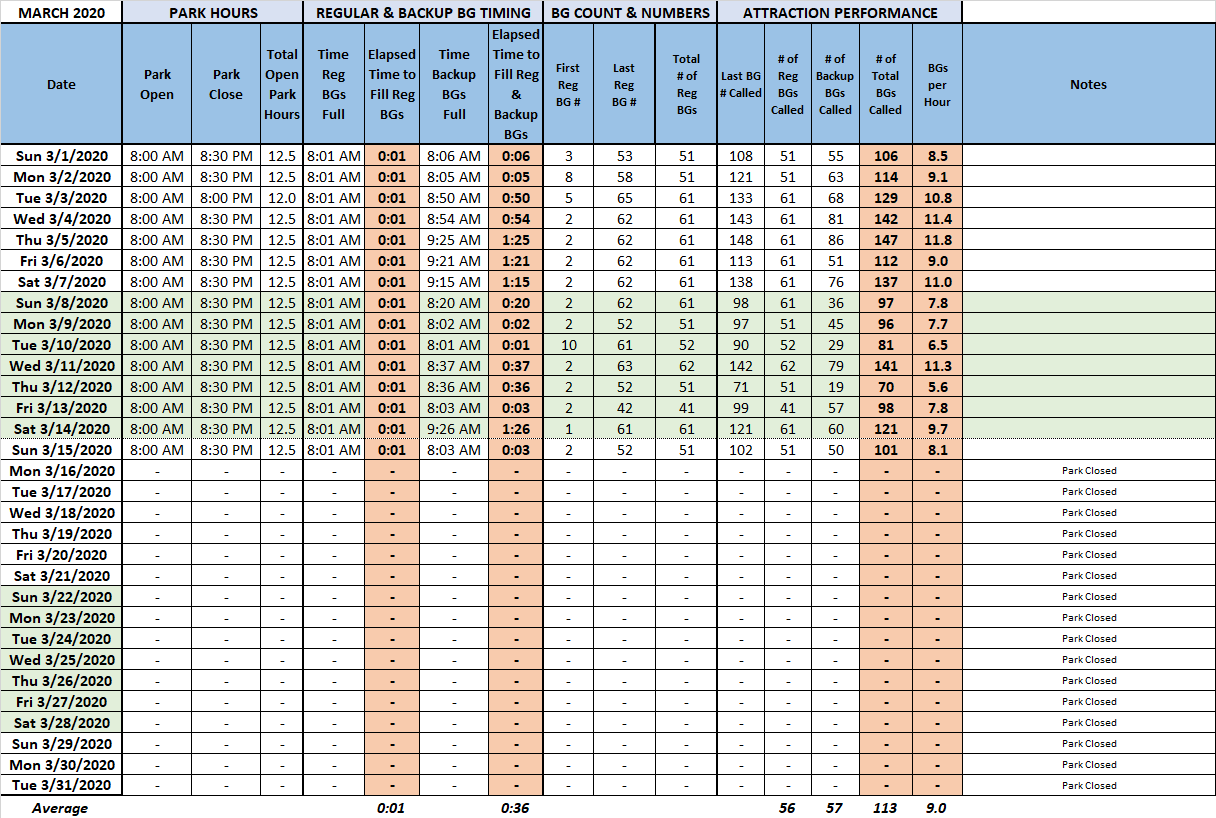 Well I’ll be heading out again tomorrow morning to Hollywood studios. Will NOT be getting there at 430am like I did today...will look at getting there by 6 and hopefully get a decent BG.

Thanks for making the new thread @rteetz ... One quick question for the data in the chart - the time listed for when BGs are full is that for the regular BGs or when the backup ones as well are full?

I thought this article below sums up the new process pretty well with some advice. The next few weeks will be interesting but hopefully come Jan 6th the 8am opens hold and we reach some sense of normalcy where a 7:15-7:30 arrival is good enough again. (This is my opinion on how I hope things go).

This is the only process that makes any sense at all.

The old way would just lead to people going earlier and earlier.

Honestly the times should be randomized as well.

Do back up boarding group get a fastpass for following days? I thought I read that before

What I want to know is how did it take 2 hours for BGs to fill today? I thought waiting later to start the process would lead to them selling out much quicker, like the first Sunday after opening where they didn’t open BGs until thousands of guests were already in the park.

TheMaxRebo said:
Thanks for making the new thread @rteetz ... One quick question for the data in the chart - the time listed for when BGs are full is that for the regular BGs or when the backup ones as well are full?
Click to expand...

Thecouch said:
Do back up boarding group get a fastpass for following days? I thought I read that before
Click to expand...

Unclear as they give you the disclaimer that you may not get to ride.

wareagle57 said:
What I want to know is how did it take 2 hours for BGs to fill today? I thought waiting later to start the process would lead to them selling out much quicker, like the first Sunday after opening where they didn’t open BGs until thousands of guests were already in the park.
Click to expand...

I am going off the info @yulilin3 provided from the HUB.

xipotec said:
Lastly, why not have a system where you can make an ADR (ARR?) for the ride, a certain percent would be available, a certain percent free each hour, and allow walk ups. You could even cancel an ARR (LOL) if they did not tap in by noon?
Click to expand...

Now you're getting closer to a FP+. This is something they don't want right now. The boarding groups give Disney more control because the ride is still not operating at the capacity it needs to be.

I don't mind this way of doing it.

I just wish they would have sent this out yesterday, so people weren't hosed over this morning showing up at 4am
X

Going to wake up around 5 and leave around 530 to get there right before 6. Fingers crossed for some good luck getting an early enough BG to be on before 3pm!

osufeth24 said:
I don't mind this way of doing it.

I just wish they would have sent this out yesterday, so people weren't hosed over this morning showing up at 4am
Click to expand...

I think today was the test. If it went okay then they would stick with it.
S

Work is a 4 letter word

I thought I saw on one of these threads that they did some kind of update yesterday.....can anybody confirm this?
D

osufeth24 said:
I don't mind this way of doing it.

I just wish they would have sent this out yesterday, so people weren't hosed over this morning showing up at 4am
Click to expand...