These are some randoms photos I just found from my trip back in March/April so I thought I'd post them! My next two trips coming in Oct and Dec I promise I'll get photos of everything and do reviews!

This is the Ostrich Filet with Wild Mushroom, Edamame, and Sweet Potato Gnocchi on a Huckleberry Emulsion at California Grill. This was this first time I'd ever had Ostrich and it was very good.

This is The California Grill's signature Pork Tenderloin with a Zinfandel Glaze. It usually comes with a cheesy polenta I think, but my Grandmother can't eat most milk products, so they made hers with roasted potatoes. Sorry the photo isn't too great. She also dug in to before I could get a picture!

This was my favorite dish of the trip at Citricos. A warm Chocolate Banana Torte.

And my Gram's dessert from Citricos - Seasonal Berry Gratin with a Champagne Grand Marnier Sabayon.

I don't know if these have been posted before, but since I don't have any food pics of my own (not until after our december trip anyway) I wanted to share this. It makes me drool:

So for the people who haven't seen this yet, I hope you liked it!! Here's looking at you kid.

My sister went a little crazy with the confectionary pictures!

Do you know the Nutmeg Man.. The king of whats le First morning at Kona Cafe I had The Big Kahuna with no pineapple. 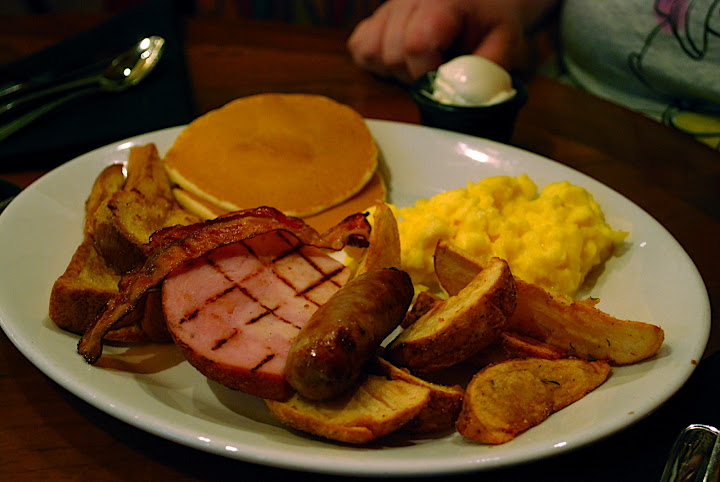 It was fabby, salty potatoes though and the butter was kinda meh!

Hubby had the Tonga Toast 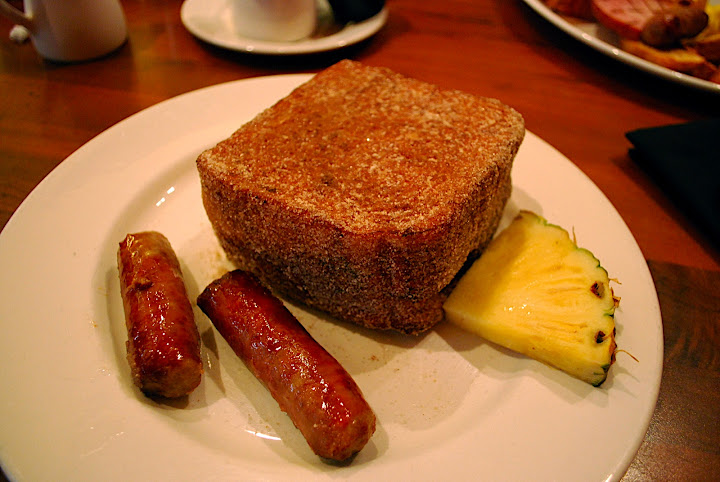 He'd been dreaming about this since we started the planning process and wasn't at all dissapointed. He had it later on in the trip from the counter service place - Captain Cooks and was just as good as from Kona.

We expected the place to be mobbed because of the whole free dining thing and it wasn't. Service was excellent and hubby also got one of these: 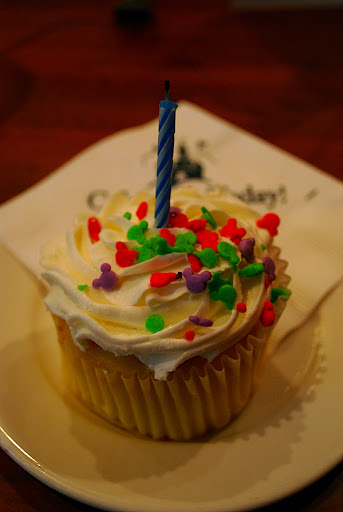 for his birthday. The birthday badge was a success on day one!

For the night of his birthday we had a reservation at Narcoosees. Excellent location for the fireworks - our reservation was late at 9 and the place had a less busy feel to it by the time our food was coming out. The waitress was a bit too mumsy for my liking, efficient in a kind of patronising way, but we played along.

The hawaiian sea salted butter seemed out of place. Why Hawaiian? 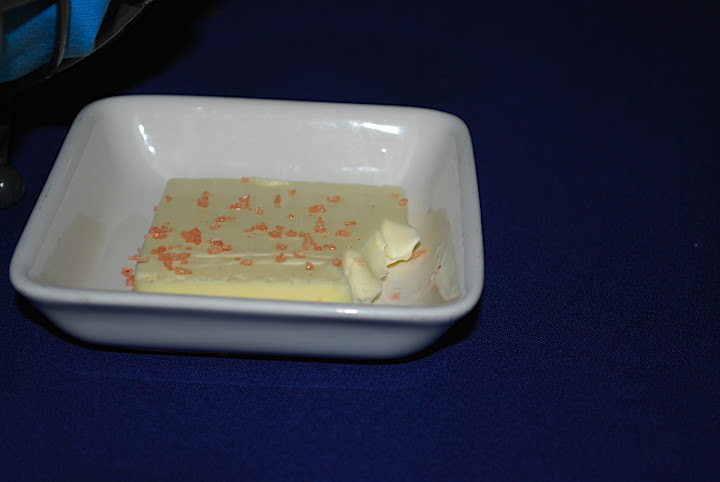 It was goooood though!

I had the cheese plate for an appetiser. I love cheese, stinkier the better. I ate them in the wrong order though, no matter, they were all good! 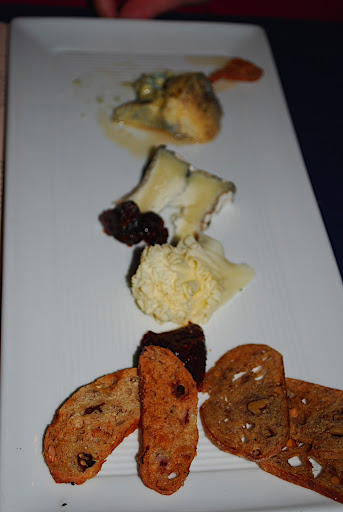 Hubby had the chicken dish - theres a theme here! 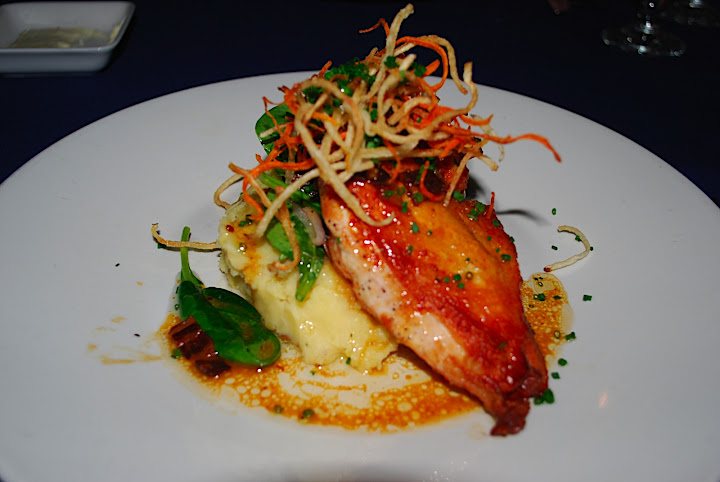 I had the Surf n Turf 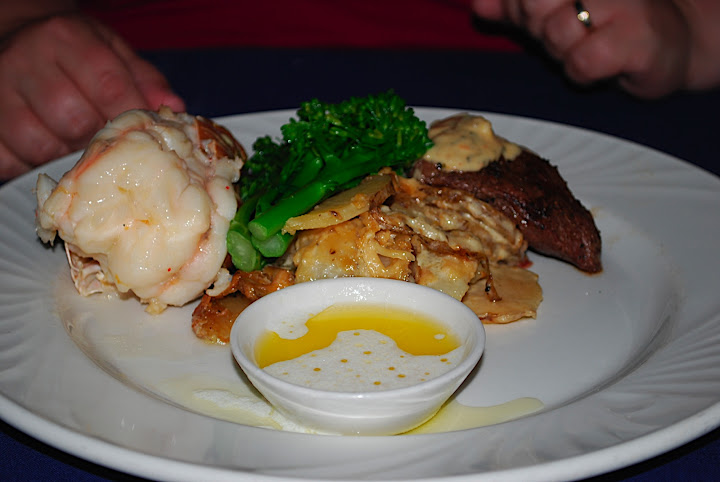 The beef though.... it was devine! In hindsight I would have just had the filet. The potato gratin was num num. Filling! So by the time dessert came I was dying!

And we didn't get photos! Because we were rubbish. Hubby had the Mango Sorbet. I had the cheesecake - which was devine! I'd reccomend it daily 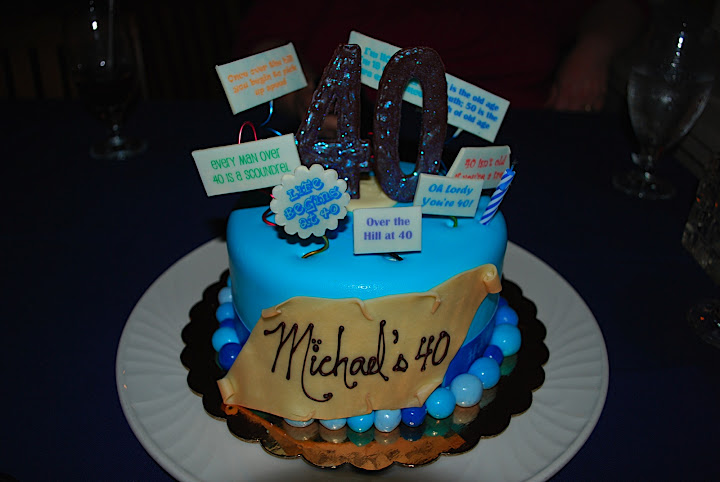 The next I seem to have in my photo album is Chefs De France.

I had the french onion soup, its every bit as good as it looks. Infact I should have just had that and dessert! 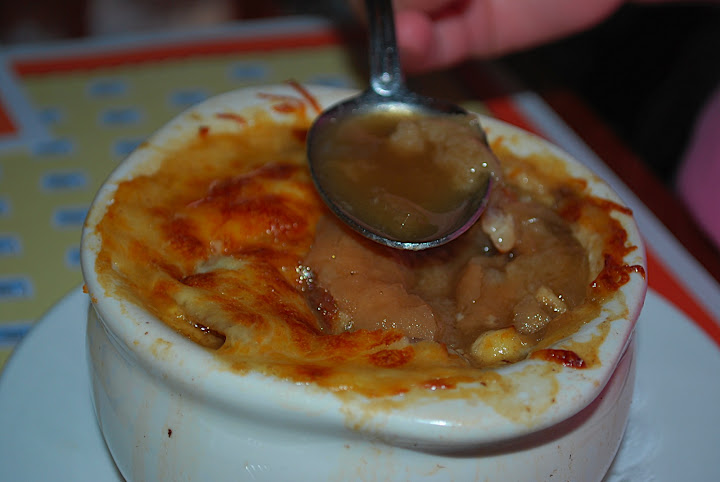 Being the philistine I am, I had no clue how they french onion soup "worked" Basically the bowl is filled with bread and then the liquid part put on top of that and the cheese on top again. It tasted fabby!

I had the macaroni for main course - it wasn't nice, the sauce tasted flowery like it hadn't been cooked out properly and the pasta was overdone and cheap tasting. No piccie unfortunately and I only ate about half of it.
Hubby had the chicken dish - he says it was beautifully cooked!

The desserts were loverly. I had the creme brulee - would reccommend it 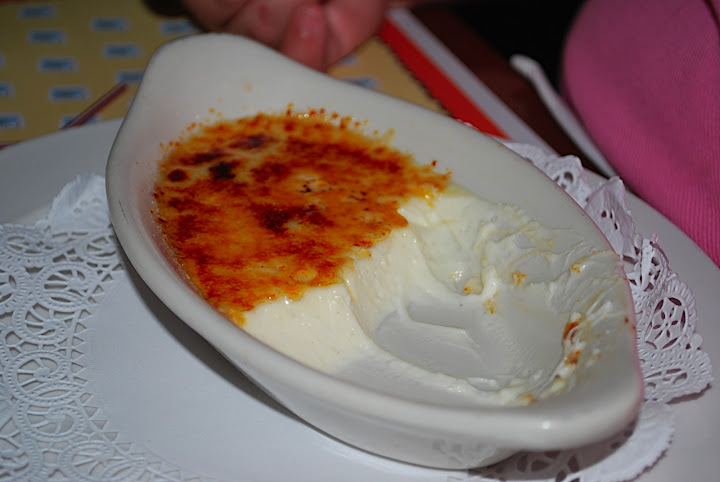 Hubby had the apple cinnamon crepe thing and loved it! It came with a candle and 5 dishy french blokes singing "Bon Anniversaire at vous" 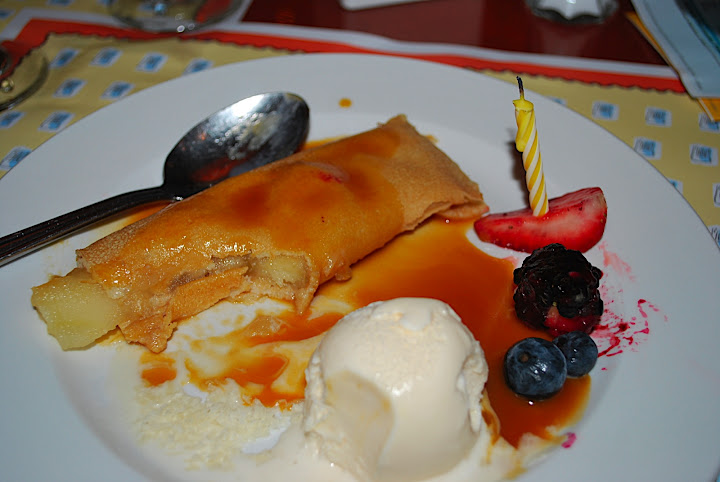 Next photo I have with food is of Crystal Palace 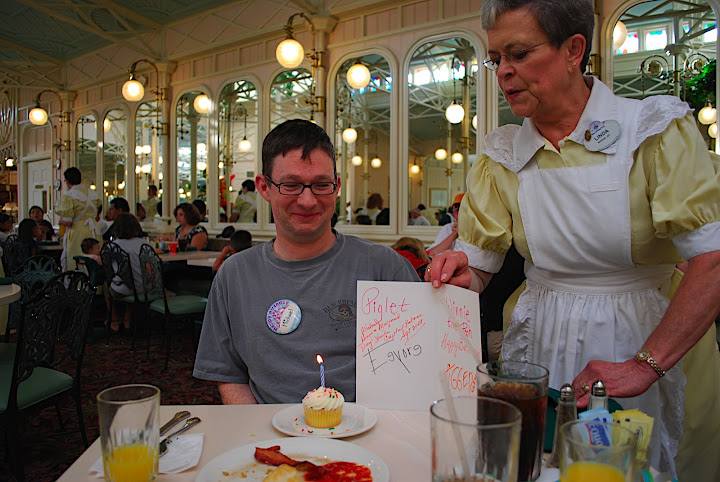 The birthday boy took full advantage of his special badge!

I would reccommend Crystal Palace over Tusker house for breakfast, we had gone to Tusker house the day before. Character interaction and service were fine but the food was not good. Crystal Palace breakfast food was awesome and fresh and the pooh puffs or what ever they were called - sounds so rude - were awesome!!

Next pics are Mama Melrose - we had the fantasmic package which I would highly reccommend. Fantastmic was only on one night during our visit and the thought of sitting for an hour and a half in a hot arena wasn't appealing so this was the logical option. I wasn't expecting much from Mama Melrose, but was pleasantly surprised! 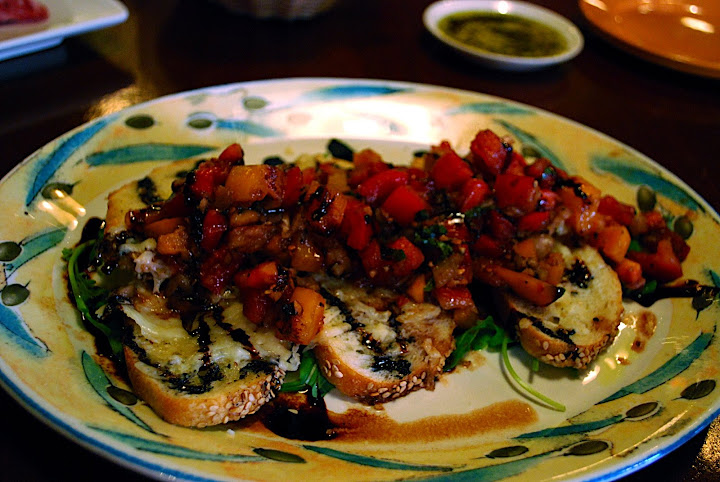 Don't think he was overly enamoured, he's very very fussy and it had a lot of bits he wasn't too keen on! Looked nice to me! 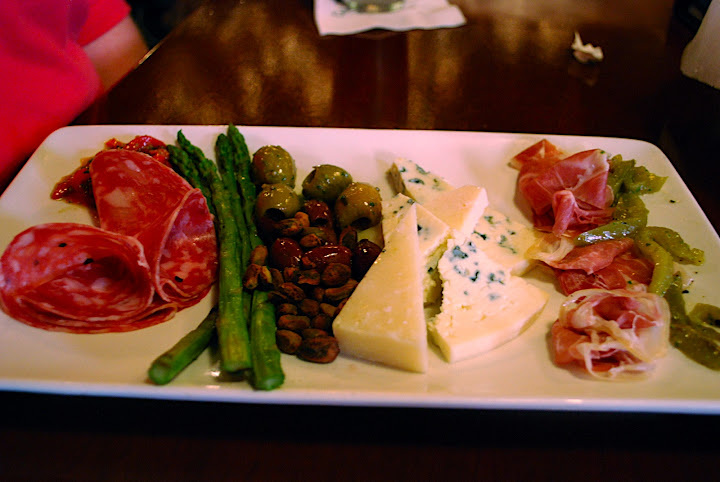 All in all it was lovely. One of the cheeses was a hard cheese and it was kinda funky to eat. Even if it had been grated I might have been more interested but hard cheese just seems odd to me! The green pickled peppers were the only thing I didn't eat, they looked like snot and had the texture of snot - 2 out of three is a no eat for me!!!!

We both had the chicken parmesan but with Rigatoni instead of spaghetti, easier on the clothes! 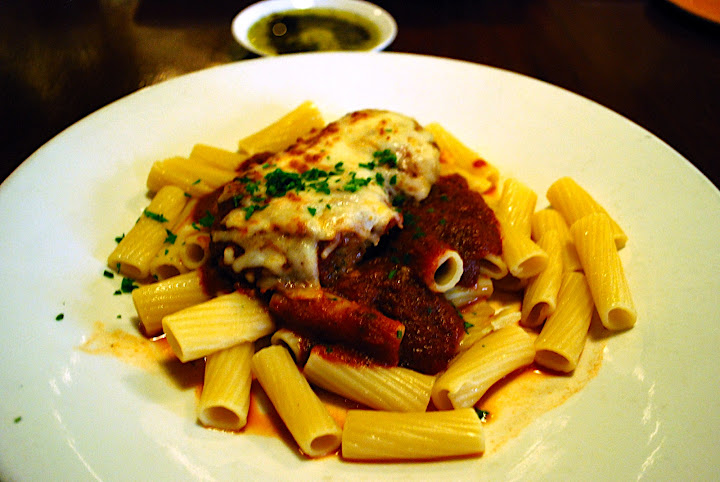 For pudding I had the Honey Hazlenut and ricotta cheesecake which was again very tasty. Had a nice tang to it rather than a creamy feel. Lovely 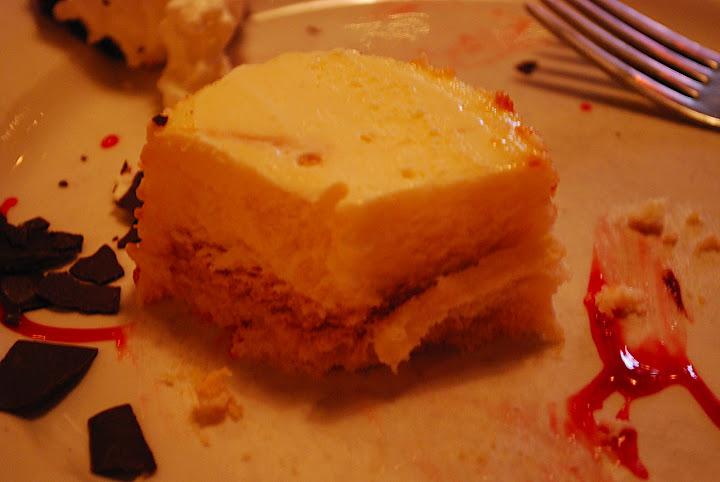 Hubby had Gelato - which was obviously too boring to photograph as there isn't one! There is however THIS beauty of the birthday boys badge in action! 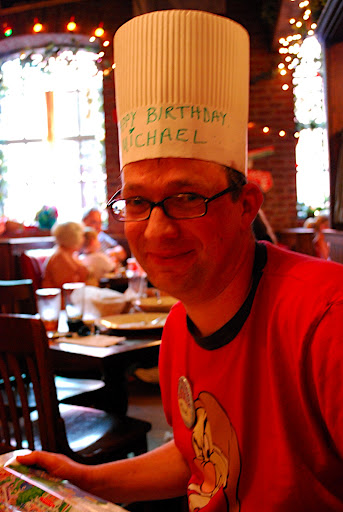 These pics are from Coral Reef.

Hubby had Grilled Mahi Mahi - one one of only a couple of times he didn't eat chicken! He says it was VERY tasty which is praise indeed from the fussy one. I had the Chicken over Spaetzle with a chicken broth and it was amazingly tasty. I had no clue what spaezle was and half expected some kind of potato affair! Lovely lovely, well worth having!

For dessert, Hubby had the Chocolate Wave 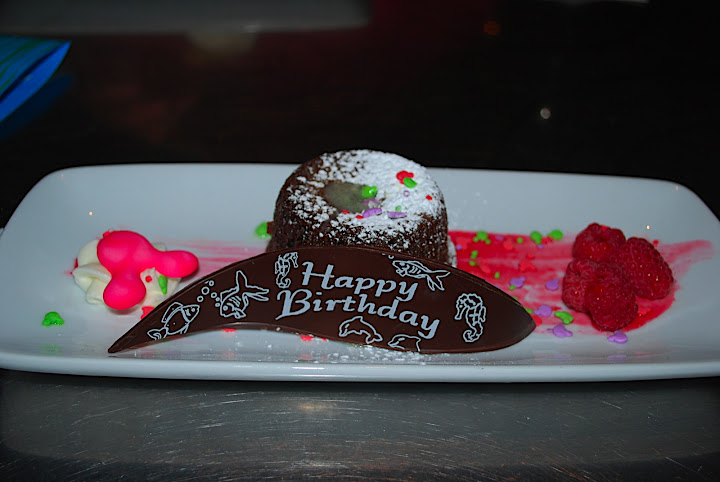 I should have had this... is was nummy oohey gooey nom nom. 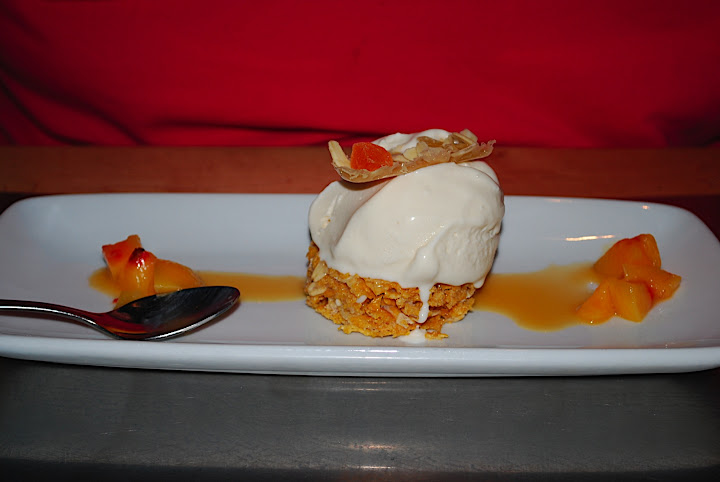 Ordinarily hubby would have had something like this! Almond Gelato it was on a Granola marshmallow cookie. It wasn't that nice. The cookie was neither firm nor chewy it was just kinda mushy.

Loved the place though, nice atmosphere. Think it would be worth hanging out for a tank side table if you can. We were a bit far away for the right atmosphere.

Lizboo said:
How was the chicken parm??
Click to expand...

It was OK, not great but tasty enough! The pasta was about the best we had at Disney. Far far better than chefs de France and Tonys Town Square.

Next restaurant is Jikos. We didn't make an ADR for this one. It got out voted for Narcoosees in the adr race! But our plans while there changed slightly and we had a free Saturday night so decided to try and get reservations for here! NO problem! In fact we made 2! Originally chose to go for a 7pm ressie and changed it the morning of to 5.30 instead.

For a reserve restaurant, I think this one turned out to be both of our favourites! The atmosphere was nice and relaxed the staff all lovely and the food. Well the food rocked the kasbah!

I had the cheese plate as a starter 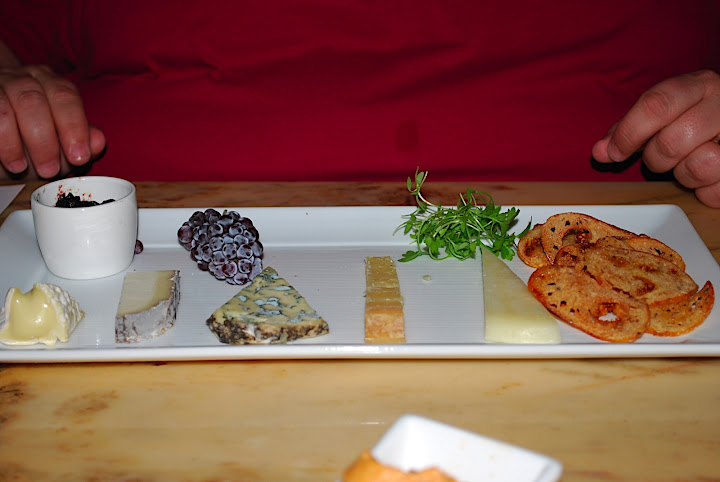 The teeny little grapes the waiter told me are champagne grapes! I love loved loved em anyway. I think the mix of cheese was probably better at Narcoosees, but this tasted just fine and dandy!

Hubby had the bread and hoummus thinigie - taste of africa I think it was called. I was nervous for him as he has never had hoummous before! It loved it, but it was just too much to eat knowing what was to come!

For main I had the one dish I had been dreaming about having but had put on the back burner when we decided to pass on Jiko. The Filet and Mac 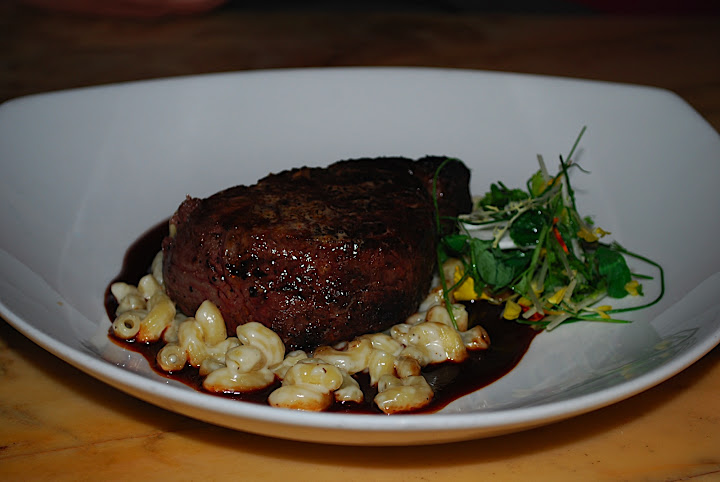 Seriously there are not enough words in my vocabulary to describe how good this dish is. I recant what I said earlier about the pasta being good at Mama Melrose. The macaroni was cooked to perfection. The meat was melty devine by far the best meat I ate the whole 2 weeks. The wine reduction sauce was sweet and salty and mellow and nummy. Nom Nom Nom. I could have eaten it twice and licked the plate both times! If you like macaroni and you like a good piece of steak, then eat this dish honestly, don't hesitate!

Hubby had the chicken dish which is served on goats cheese potatoes and a lemon sauce is drissled over in front of you. 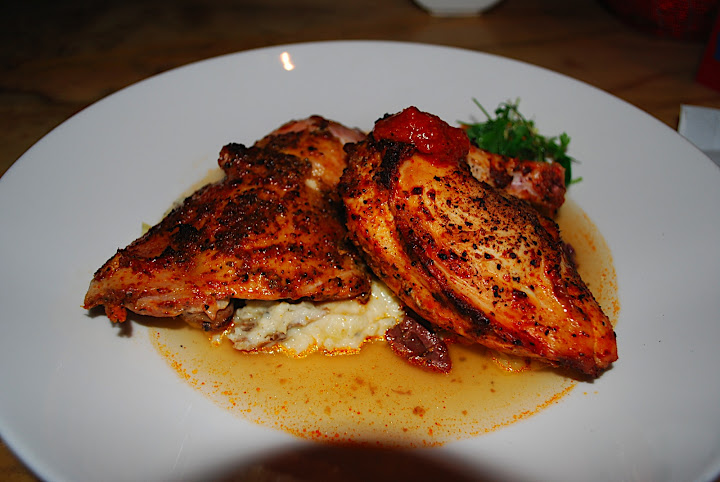 He says it was great, beautiful chicken two thumbs up!

Desserts were harder as we were stuffed!

He had an apple thing. I thought it was a tarte tatin but its not mentioned on the menus online. 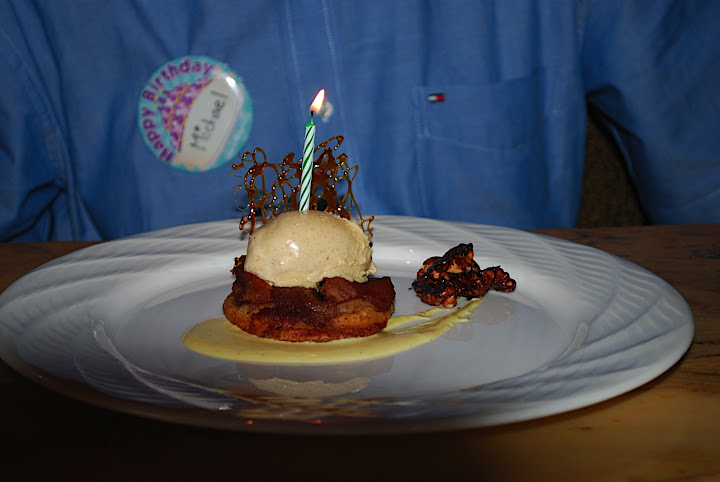 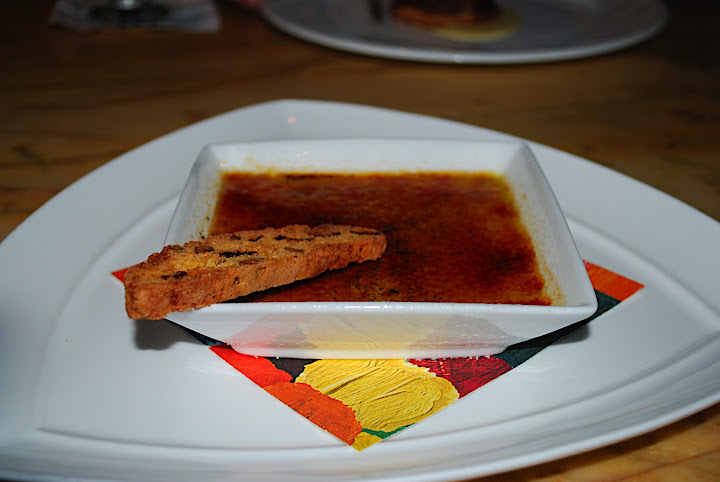 Don't remember exactly why we didn't choose this one originally - I suspect the fireworks locale for Narcoosees was more appealing. But to me... this was our BEST meal of the trip!

These pictures are really bad. But the food was good!

Corn and crab chowder from CRT.

the royal sundae from CRT.

The White Chocolate slipper we ordered.

Hotdog, fries, a cheesecake and a sprite from Backlot express