After the disappointing weather of the previous day, this morning dawned bright and beautiful. Absolutely typical!

Determined to make the most of our last day, we finished the packing and called bell services to collect out luggage and the Owners Locker, then made our way down to the boat dock. We were headed to Hollywood Studios. 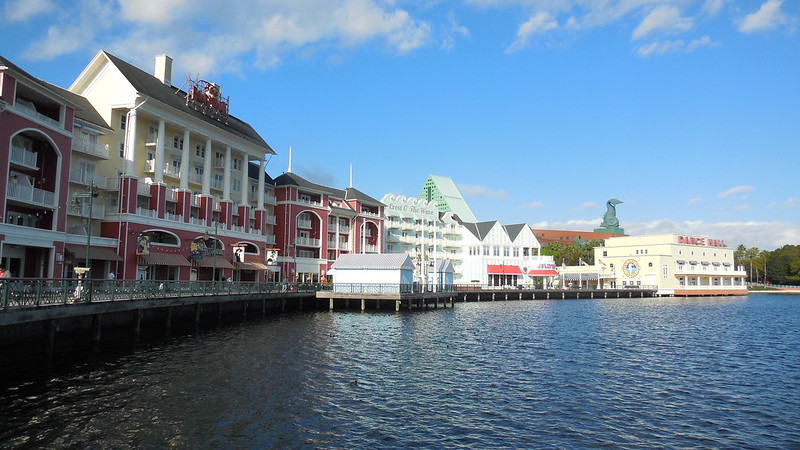 We arrived just before 10.30 and went straight to Tower of Terror. Standby times were already massive  over 45 minutes  but luckily we had FP+. After riding, we had to have one last snack stop at our favourite, Starring Rolls. Red Velvet Cheesecake Cupcake for Sian and Apple Danish for me. 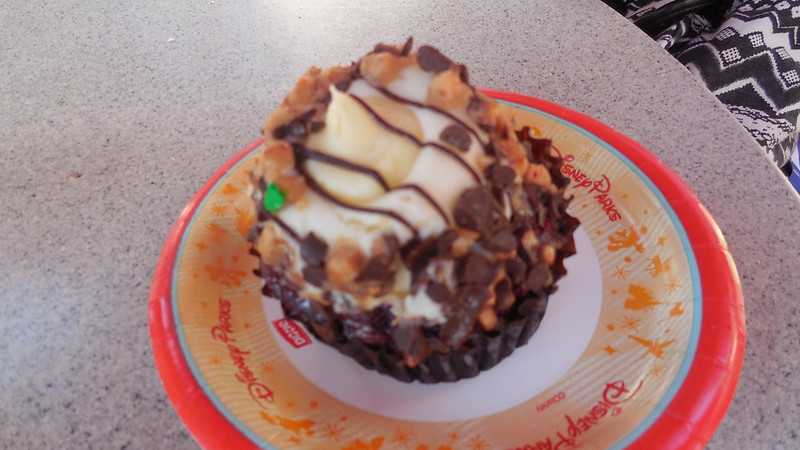 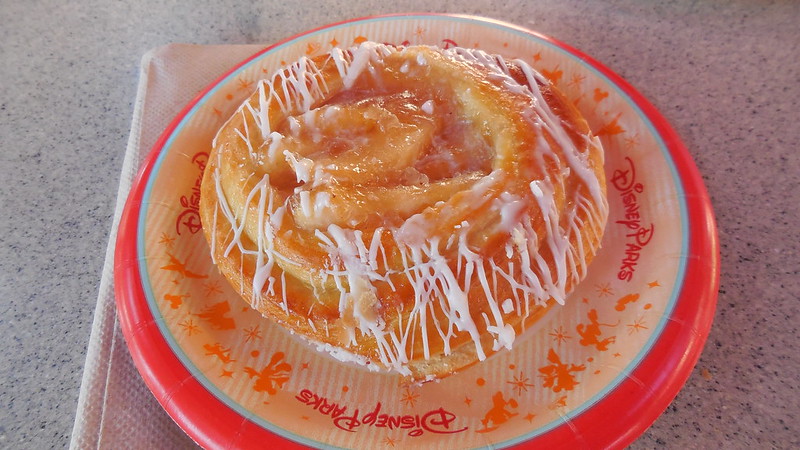 We wandered the Streets of New York for a while, enjoying the sunshine and taking in the atmosphere, savouring every moment of our last day. 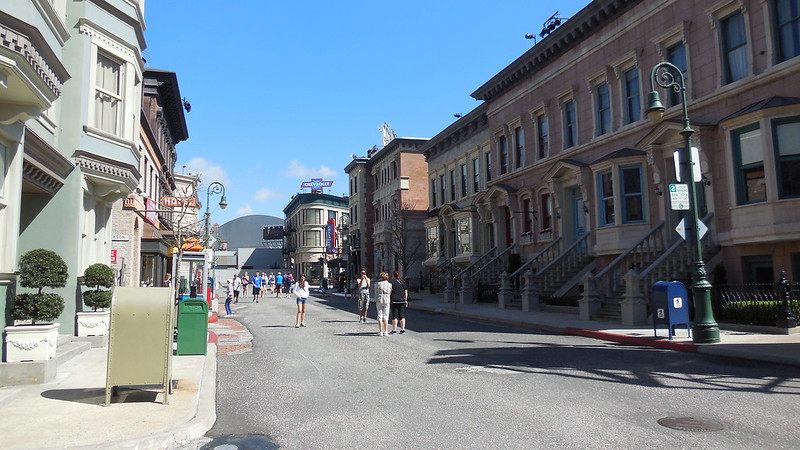 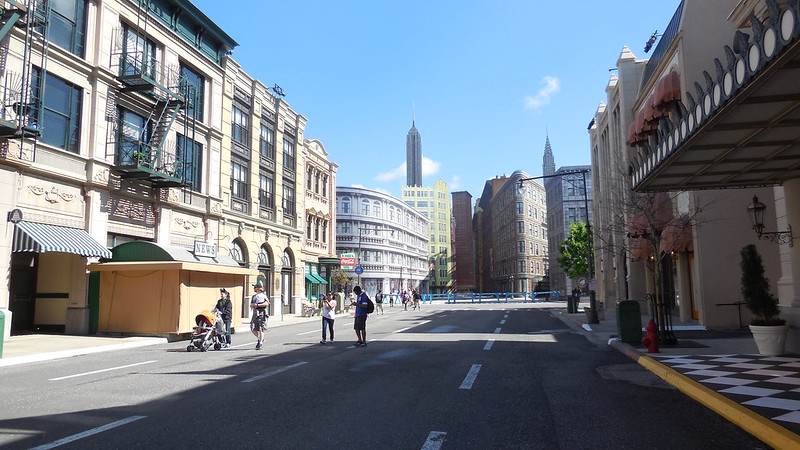 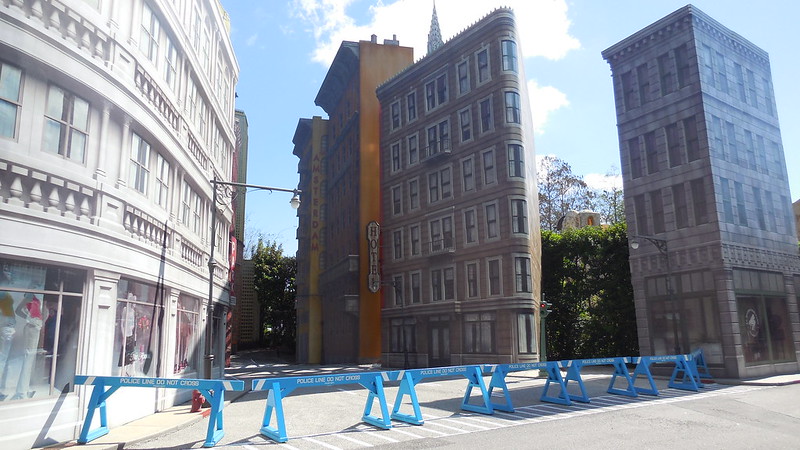 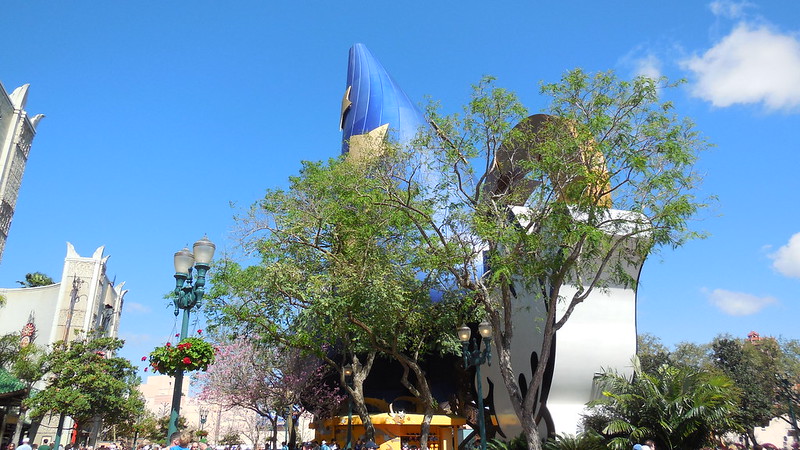 Our next FP+ window (Toy Story Mania) had opened up - guess who won? 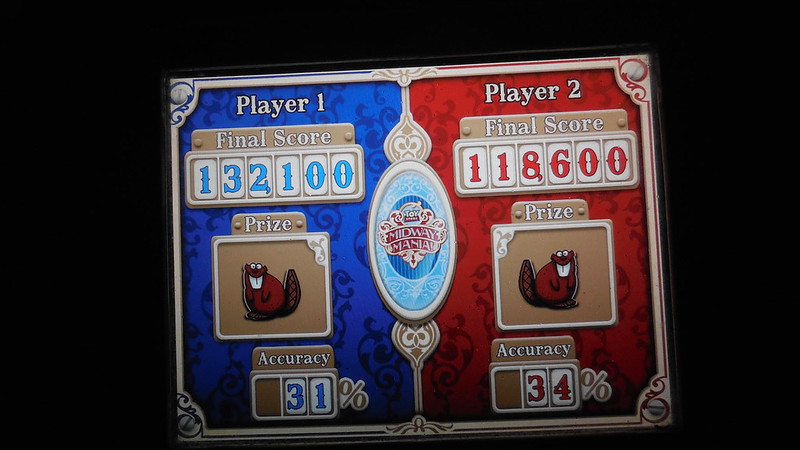 I dont know why but I have never noticed this before. 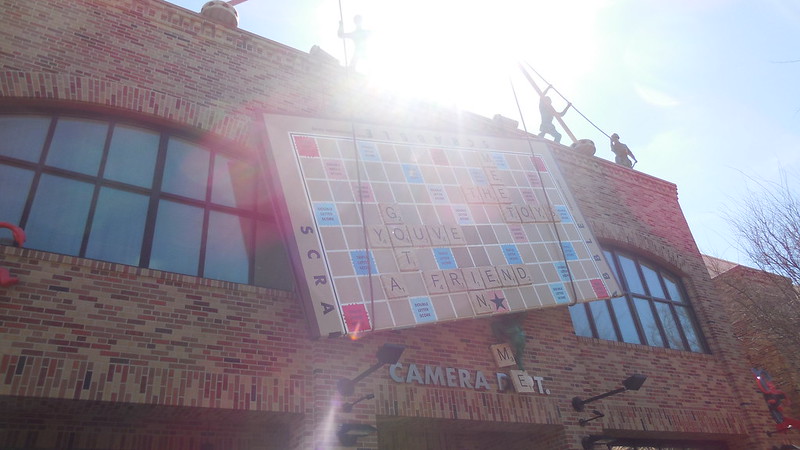 The green soldiers were out and were marching a bemused group down the street. 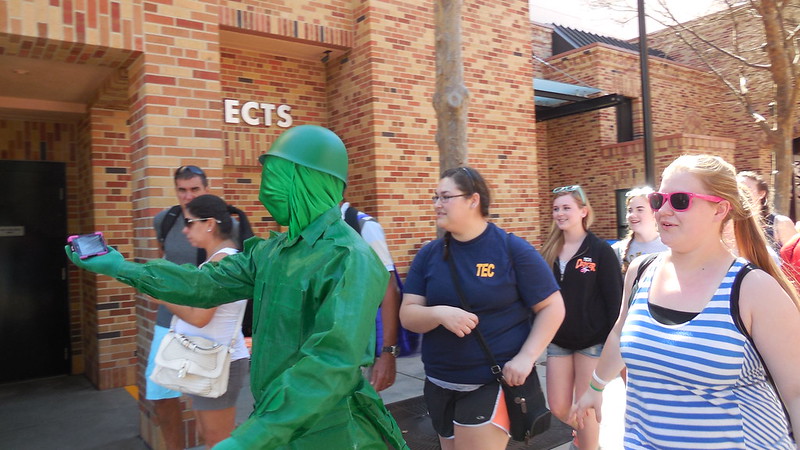 After our final ride of the trip, Rock n Roller Coaster, it was time to grab one last picture of the hat and exit the park. 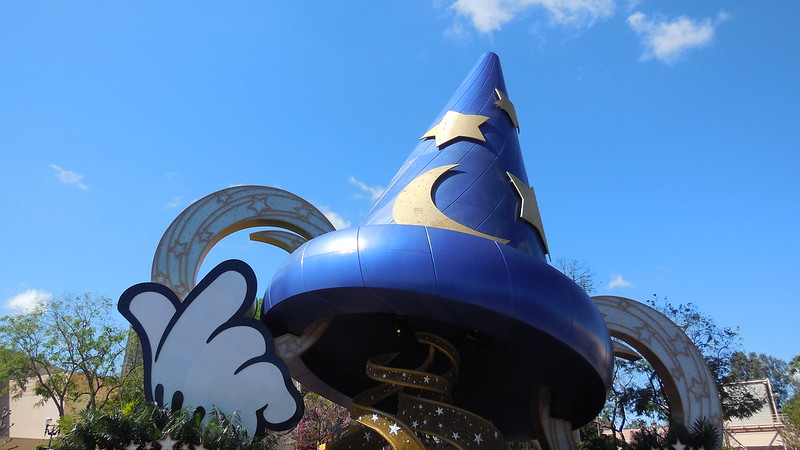 Back in October, when wed stayed at the Swan/Dolphin, The Fountain had been our favourite place to go for a late night ice-cream but we hadnt had a chance to try lunch or dinner there. Originally, wed planned to visit Beaches and Cream for our final lunch but we both decided it might be nice to revisit The Fountain. We caught the boat and alighted at the Swolphin boat dock, making our way over to the Dolphin.

Our waitress was phenomenal. She was so friendly and we loved chatting with her. She said how much she would love to go to England one day so I told her she should go home in my place and I would stay and do her job. We were all set until I mentioned my husband and she said she didnt really want one of those. We both ordered Diet Cokes and a chicken sandwich. We obviously had to have ice-cream  that was the reason for coming here  and chose the make-your-own sundaes. Strawberry with marshmallow topping and sprinkles for Sian, Mint Choc Chip with hot fudge and Peppermint Patty Cookies for me. The chicken sandwich was delicious but the sundaes were out of this world. A wonderful last meal at Disney World. 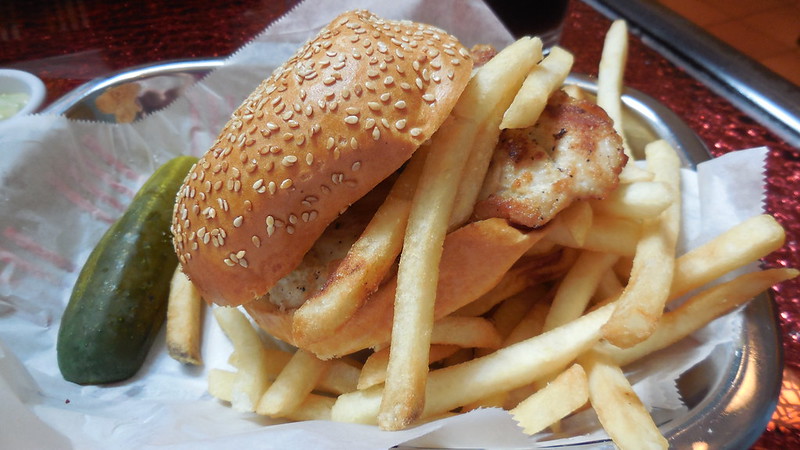 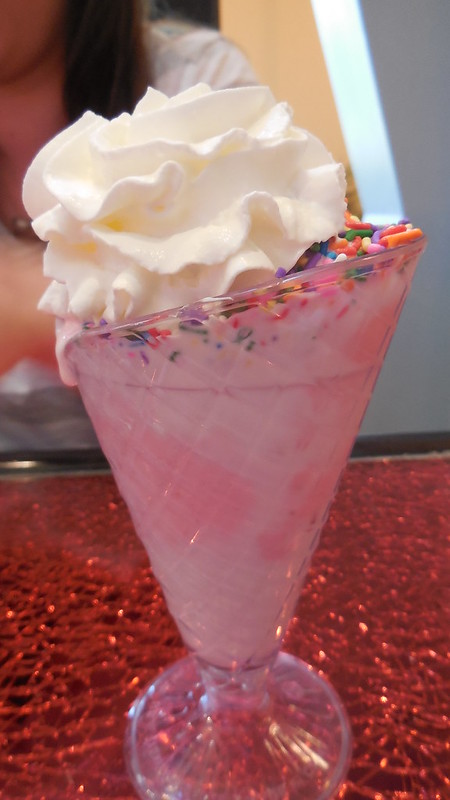 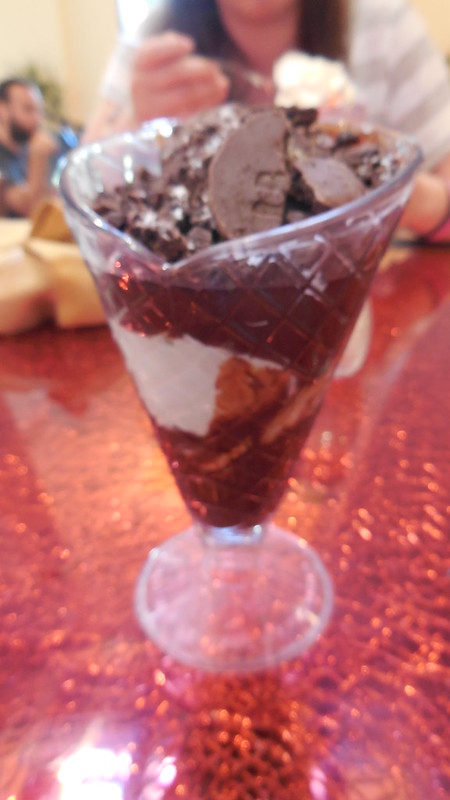 After lunch, we were stuffed so took a slow walk around the lake. It was such a gorgeous afternoon and I remembered how much I loved this location. I was desperately hoping that we would be able to get a room at the Boardwalk for our stay with the in-laws in October (which we did, by the way). 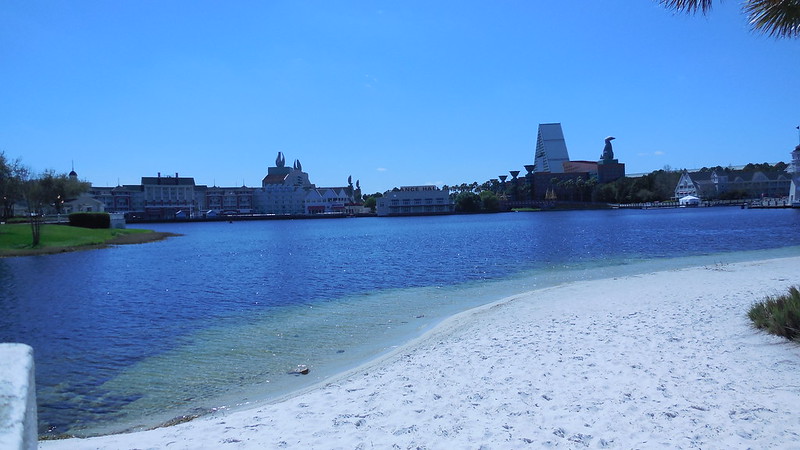 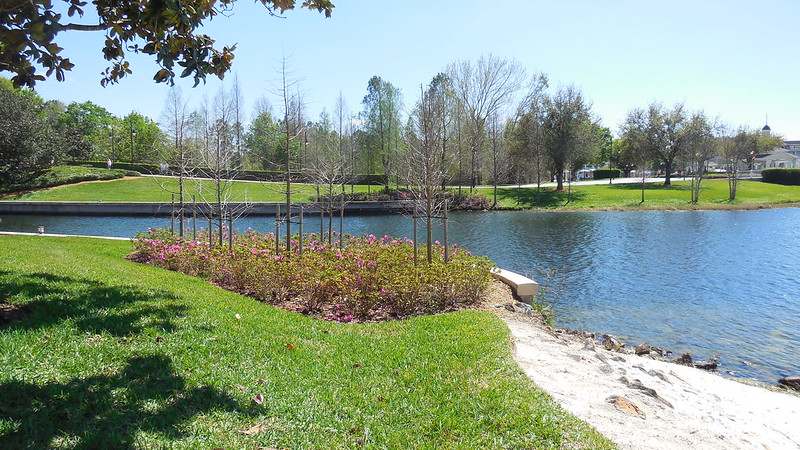 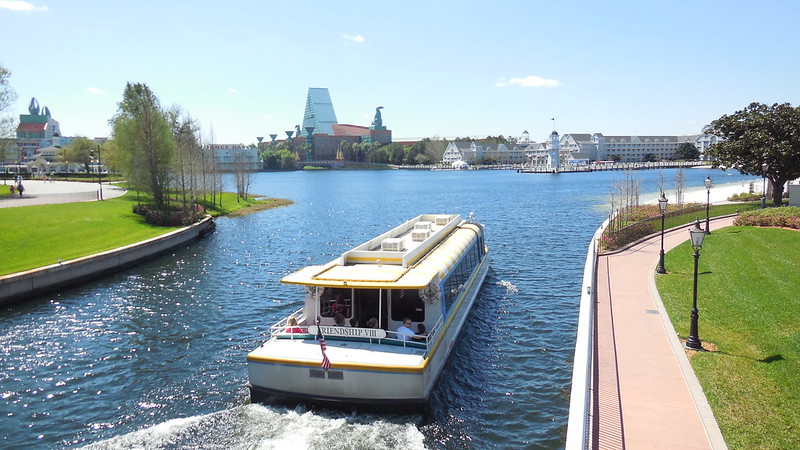 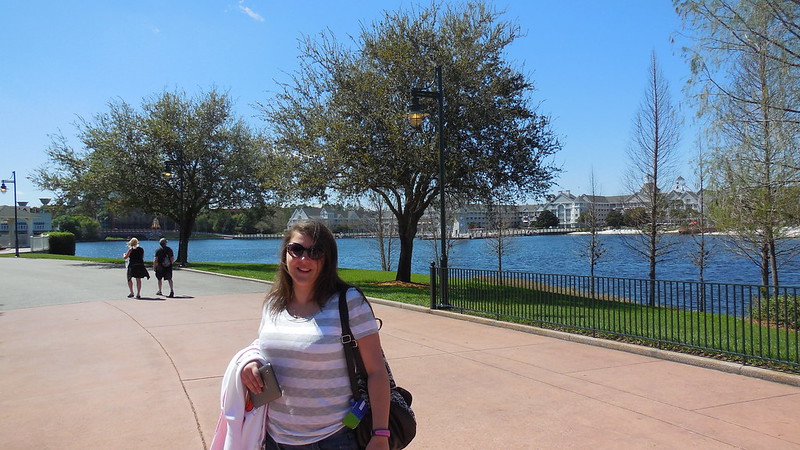 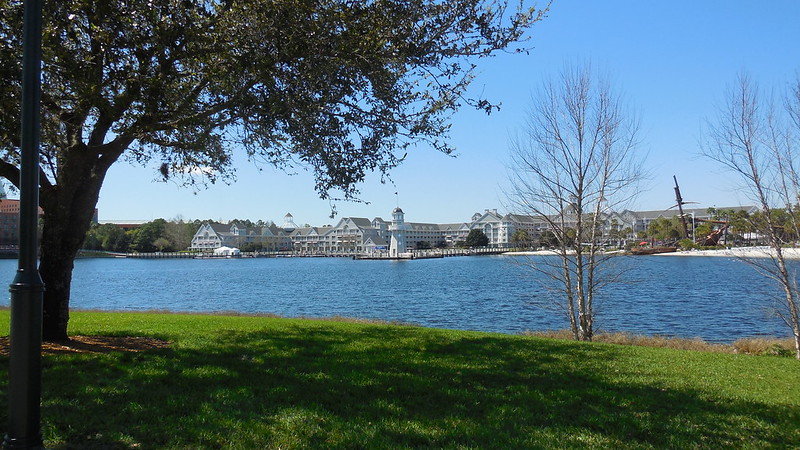 With a heavy heart, we made our way back to the resort to collect our luggage and wait for the Magical Express (or Unmagical Depress, as my friend Paula calls it). We just had time for a final drink at the pool bar before we left. 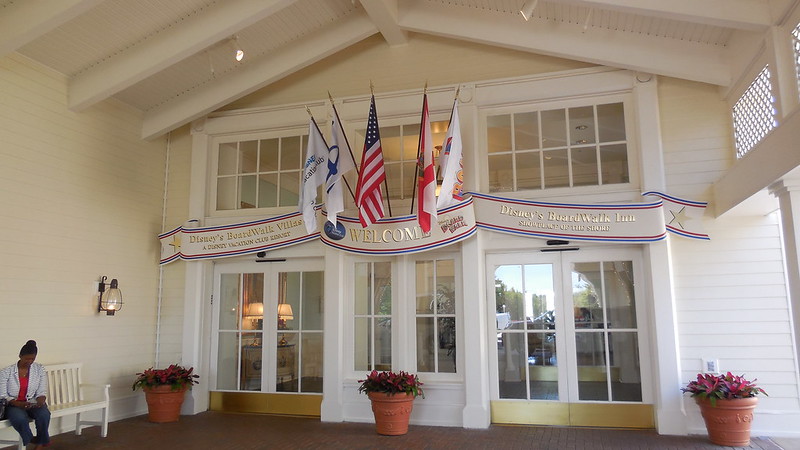 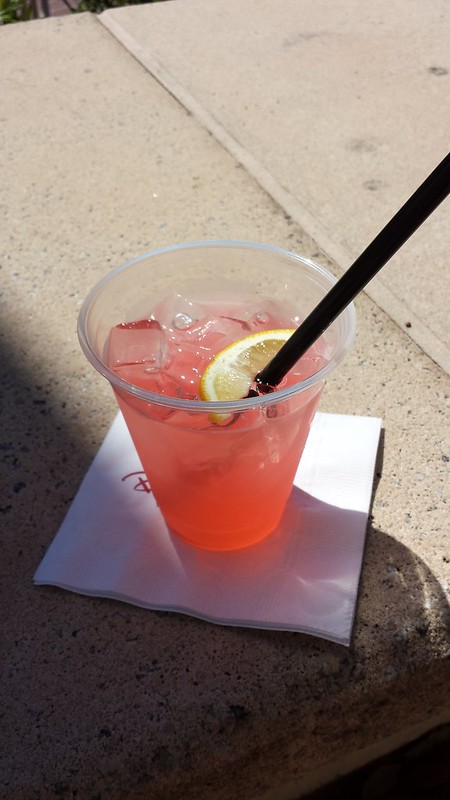 The driver pulled up to the resort a few minutes late and collected in our transportation letters. When he saw mine, he said to me you fly American Airlines, right? I told him, no, we were flying British Airways and he kept repeating No, American. I insisted it was BA and he told me Not British Airways, they dont fly to Orlando. You get off at American Airlines terminal he told us. Thanking him, we climbed onto the bus where I quickly googled the correct terminal for BA and we were set. We stopped at Caribbean Beach Resort to pick up some more travellers  funny how nobody looks as happy on the bus back to the airport as they did on the way to WDW.

Not long after we left Caribbean Beach, I smelled Mexican food. I wondered if the guy a few seats in front of us had smuggled a burrito on board. The smell was getting stronger and was now decidedly off. I suddenly realised that the guy in front was actually throwing up all over the floor. I nudged Sian and we moved a few rows back.

When we arrived at Terminal A, the young lad in front got off the bus and, to my amazement, just walked away without even speaking to the driver. Another family, who wed been talking to back at the resort, told us they would mention it to the driver when they got off and they did. I could see them pointing to where the guy had been sat and the driver nodding. Unbelievably, the driver got back onto the bus and just drove away without even making any attempt to clean up the mess or anything. The smell, by now, was unbearable. I couldnt wait to get off the bus.

Arriving at Terminal B, we quickly climbed down and waited for the driver to unload the luggage. I had a $5 in my hand, ready to give to him and as he came past us, I attempted to tell him about the young lad, just in case he hadnt quite got the message. He brushed off my attempt, rudely interrupting me with Ill get your bags, OK? I was completely stunned that he would be so dismissive. Needless to say, the $5 went back into my purse.

Inside the terminal, we did bag drop and went through to departures. After a little bit of shopping, we decided we would get something to eat, knowing neither of us was that keen on the plane food. We headed upstairs to Chilis, where we got a couple of diet cokes and shared an entrée of chicken crispers. 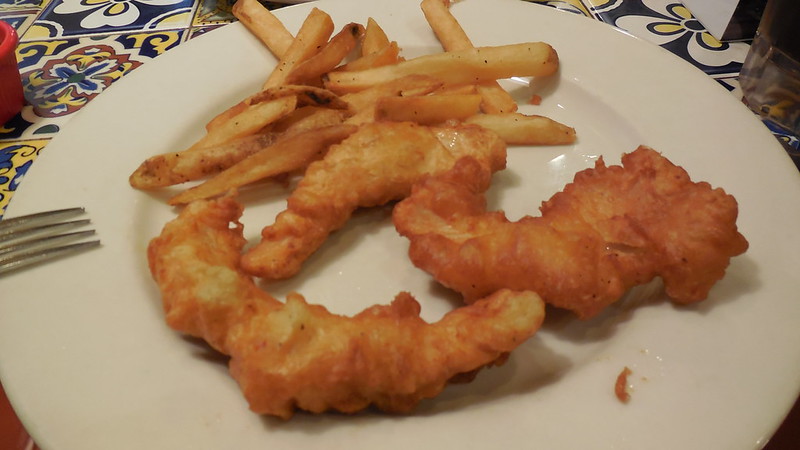 All too soon it was time to board. Having pre-booked our seats at the front of the World Traveller Plus section, we had plenty of leg room. 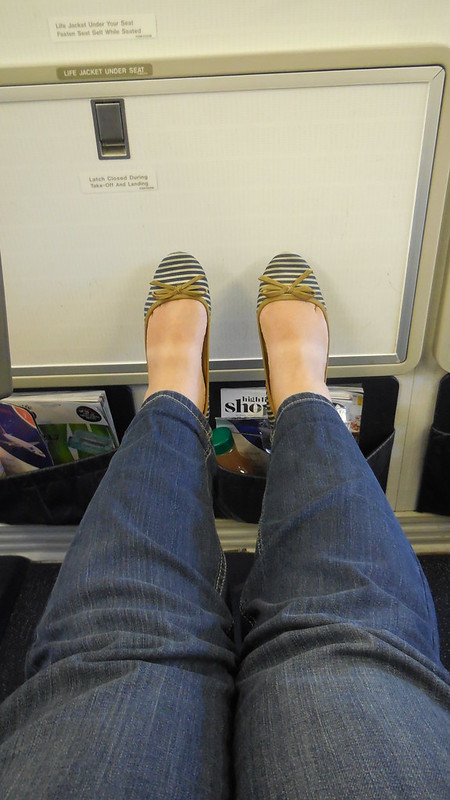 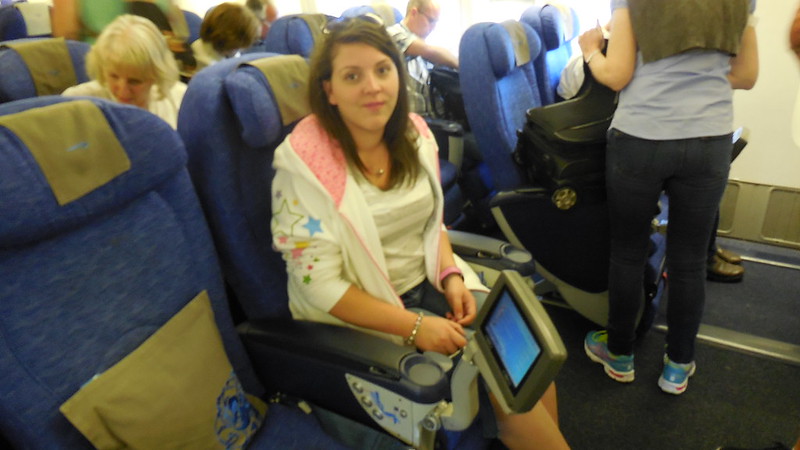 The flight home was long and boring. There was minor excitement at one point when a member of the cabin crew approached a gentleman sitting across the aisle from us. Apparently he was a doctor and somebody at the back of the plane was having an anaphylactic reaction. There was talk of a possible diversion but, luckily, this didnt happen and we landed on time.

We were through passport control fairly quickly and, after collecting our luggage, realised we were far too early for our train. We decided to have a quick breakfast (nothing to write home about) and then see if we could blag our way onto an earlier train. In the end, no blagging was required as nobody checked our tickets. By 12.30 we were back in Chippenham and my Dad kindly collected us from the train station and dropped us home.

Thanks to everybody for reading along. I had a fabulous trip with my baby girl and now, apparently, I need to be saving up to take Daniel for his 21st.

Did the trip feel really short compared to your normal 2 weeks?

Thought Gary was taking Daniel skiing for his 21st

Thanks for sharing xx

Chilly said:
Did the trip feel really short compared to your normal 2 weeks?

Thought Gary was taking Daniel skiing for his 21st

In a lot of ways, it didn't feel that short - I think probably because the most recent visits we've had, we haven't been spending that long at Disney anyway. In fact, 10 days this year will be the longest time we've spent at WDW in quite a while.

ahhh sounds like a lovely trip. Thanks for posting.

Fantastic TR Joh, I've really enjoyed it
Why have I never visited the Fountain??!
I think this could well be on the list for October

Linda67 said:
Fantastic TR Joh, I've really enjoyed it
Why have I never visited the Fountain??!
I think this could well be on the list for October
Click to expand...

Thanks for reading along Linda. The Fountain is a great option, especially with you being a short walk away at the Beach Club. The Peppermint Patty shake is my favourite, can't wait to have that again in October

<font color=blue><marquee>Am I the only one who lo

I am amazing that you fitted so much into one week, having said that less people in a group cover more ground and quality time with your baby girl

<font color=33cc99>Dreams about being stuck on Spa

I had a great time reading along, thanks so much for posting. Cara has her heart set on Las Vegas for her 21st, gonna be a very different trip lol. I'm glad you got such lovely quality time with Sian
S

Your report was, as expected, lots of fun to read, Joh. Adventures (and a misadventure or two), laughs, cupcakes, and wonderful photos make a lovely set of 21st birthday memories for Sian. About saving for Daniel's 21st birthday trip to WDW, you can't kid us. He's going this fall. I'll look forward to that report. You were concerned that you hadn't taken notes for this report, but it can't be told by the results. Good work.

Loved your report Joh! Sounds like you guys had a great time.

Stranger from the outside

I've loved reading your report and seeing your photos. It's great to see how much can be packed into a week.
J

<font color=darkorchid>I was born without a 'Hidde

Linda67 said:
Fantastic TR Joh, I've really enjoyed it
Why have I never visited the Fountain??!
I think this could well be on the list for October
Click to expand...

Oooh, me too! Think we will have to pop along when we are at BCV.

A great trip for the two of you, I really enjoyed reading it. You have also reminded me that you can pack plenty into a week, especially with the use of FP+, and I feel there may be another Oct half term trip on the cards for us in the future.

Thank you for your lovely report.
Food and drink looks lovely - after reading this I need to go to look for chocolate!!
It seems that your daughter and you had a trip that will always be remembered!

Caught up on the whole week today

You are so lucky Joh that Sian wanted to come with you. Boys are definately different. Oldest DS would come with me in a flash as long as he could bring his GF which is understandable as he missed her last year but youngest DS was miserable last year and I don't think he'd come again

Sian is such a pretty young lady. You must be so proud. Know you want to take Daniel when he's 21 but what about the girlfriend

I am like a child in a sweet shop, hyper on sugar!

After the thread the other day in UK planning about UK TRs - I decided to venture over here (hadn't even noticed it tbh!). I couldn't not read your TR as I knew there would be lots of cupcakes and more importantly, cocktails in your TR

Thank you so much for taking the time to write this. Having written them for DLRP trips before, I know how much effort it takes. But also, how lovely it is to read it back in months/years time

Looking forward to the next one in October

Awww another one over with!! Do I really have to wait til October for the next one?!

I've loved catching up with your TR Joh, it looks like you had an amazing week away and I loved all the photos!! I really hope Samantha wants a 21st birthday trip one day