*No poll tomorrow - my DD18 is playing on our states AllStar team this weekend.

If you live somewhere like me, you know what it’s like to have a town festival going on somewhere every weekend.
Are you going or did you already go to any town festivals this summer?

For Me……We currently don’t go to any town festivals.
My DH and I used to be on our town’s festival committee, and I used to take my girls to several festivals when they were little, which got me a little burned out on festivals. Maybe I’ll return one year, it just won’t be this year

Being a Nana is my superpower

Not anymore.....used to go to several when we lived in our last house.

No festivals. And do try to stay away from them, traffic-wise.

Best wishes for Katie and her All-Star game. Hope you all enjoy.
L

I avoid our festival. Every year over the Labor Day weekend, the population of our little village goes from 1200 to over 100,000. It’s absolutely ridiculous. We have to drive out of our way to go anywhere cause it’s nearly impossible to drive anywhere through the whole town. I don’t even leave the house if I can help it.

We've taken DGDs to a local festival a few times, but they aren't really interested in it any longer. We have no interest in going without them.

The only one around here that I go to is the Greek food festival at the Greek Orthodox Church. it's relatively small, but man is there some good food to be had! I go every year.

As I a kid, when I would visit my dad in Rhode Island they would always have a Summerfest in the small town that was more like a carnival. It was fun though and my dad's band would play on the big stage. I do not believe that they do this anymore, but I haven't been up there in years.

Avoid like the plague ! Too many people too much tragic - last one two weeks ago 50,000 people over weekend in tiny town with two blocks worth of streets - ah no thanks - my DD worked it once - what a nightmare dropping her off at 4am and picking her up at 7 pm - and I took back roads not main entrance and walked a mile to get her - as she was not allowed to drive and park
Most places around me are too small for these things so they are nightmares to attend - no Thanks - years ago before they were so popular we went and it was enjoyable - not anymore

Sure, I enjoy most types of festivals. There are none in my town, but several close by.

I even like the large crowded festivals. Relatively local and in far away places. One of my favorites was The Taste of Chicago around July 4.

Plus State and County Fairs, big and small.

(Avatar art by my daughter)

We do parades, so we've been to two so far. We used to take our Studebaker pickup through the parades, at some DH takes a tractor, and this year we're taking the Mustang because it's so much easier.

DD20 is a parks & rec/Chamber of Commerce intern type so we've been on the volunteer side too. I'd like to go to the festival in her current town this year but we might have to go to MIL's county fair instead.

RedAngie said:
One of my favorites was The Taste of Chicago around July 4.
Click to expand...

Not quite the same as it used to be, 10 days long. Now only 3 days in Millennium Park plus a number of neighborhood 'Tastes' over a few Saturdays. 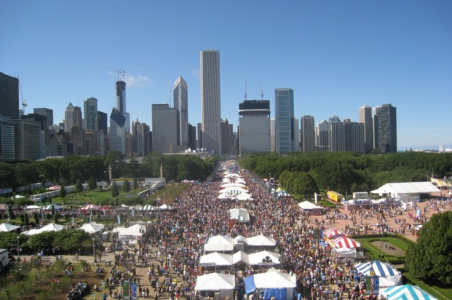 We usually stop by our local festival if we're in town - gotta get us an elephant ear!

My town now has local bands playing on Sunday afternoons/evenings throughout the summer. I can hear them from my deck. I do not walk the couple of blocks to attend them. I don't mind them as much as the festivals that used to occur. While the main drag is blocked off, there aren't as many people attending these events as the festivals. Every year, I would complain to our bureau about the festival. I don't have a driveway and instead of having traffic limited to one way on my street, they would keep it two ways. With so many cars parked on each side, EVERY year, I would lose a mirror or my car would be hit. Of course, hit and run... always.

They finally moved it to an alternate location that had off-street parking and more room for vendors. My car has been unharmed since this occurred.

As for church picnics, I've been to one of those... a Greek festival, too, @BrianL, two times. I'll be going to another next month that is around 30 minutes from me. My friends and I follow another friend's band and they play at that picnic. It will be a fun night of dancing and friendship... and good Polish food.

Yes, love our local town festivities. They only draw people that live in the area, so perfect amount of attendance. The July 4th festival is just down the hill from our house and it’s a mash up of food, music and entertainment. It’s back this year, can’t wait to go!

I went to two a couple of months ago. For the most part, I seem to find out about festivals after they're over. I only found out about one this year and at that festival met a lady selling wreaths and she gave me her business card and she has a website. When I went on her website, it mentioned the other festival. Not good advertising where I live. I like going to festivals, sometimes a nice day out. Now it's summer and gets very hot where I live so if there are some, most likely not going due to heat and humidity.

My town doesn't have any festivals. Once in a while they'll do a fireworks show at the soccer field in Summer, but that's about it.

They have a First Friday Festival each month up in town, but I haven’t gone to them. Parking is pretty difficult normally, so I can only imagine how bad it is with some streets closed off for pedestrians.

Hums in her sleep

Not quite the same as it used to be, 10 days long. Now only 3 days in Millennium Park plus a number of neighborhood 'Tastes' over a few Saturdays.

Chicago ( back in the day) could really throw a party, IMHO.
L

A church in our little city has a festival every year. We took the kids when they were little and it was a nice event. It has changed so much. Lots of drinking and fights happening. We stay away from that area now during the festival.

Seems to be lots going on in Alexandria. Two day jazz festival last weekend on the waterfront with music, a local brewery and some local food places selling. Not thousands of people, few hundred and I think most walk there. Arts & craft festival coming up this weekend. July 9 is Alexandria's 273rd birthday celebration with fireworks in addition to the food & music.

I generally go to at least one. My town has a small Autumn festival, and some other towns around here have things too. I enjoy them.
You must log in or register to reply here.