Today was St Patricks Day and we had plans to meet up with the Stringers tonight for a few drinks. But first, we were heading to Epcot in search of some elusive Princesses. Our experience the other morning had taught us that we needed a plan of attack. So, 8.30am found us waiting patiently outside International Gateway, with only a handful of people ahead of us.

At 8.45 we were allowed in and I power-walked on ahead, while Sian followed on behind at a slower pace. When I finally arrived in Norway, I approached the CM at the end of the line and was relieved to see that were nowhere near as far back as we had been a few days before. That was a good start. I commented to the CM that I was getting too old for this but we had to do certain things for our kids and he replied Yes, the little ones do love the princesses. I think he was a little surprised when my little one turned out to be a fully-fledged adult. We were waiting patiently in line when another CM came up with her little counter, asking how many in each party. The lady in front of us replied and the CM told her it would be approximately a ninety minute wait. The lady groaned but Sian and I both cheered  90 minutes was a vast improvement on over four hours. The CMs were positively encouraging one parent to wait in line while the rest of the party went to enjoy the park, which was all very well if you were a family but not really feasible for us. I felt sorry for the single parents as they would have been stuck with all the kids in that long line. I did take advantage and duck out of line to get a couple of pastries for breakfast, plus a diet coke. 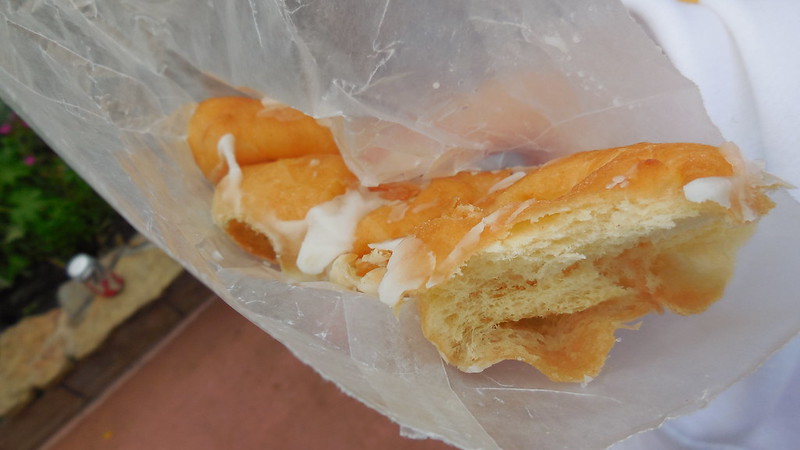 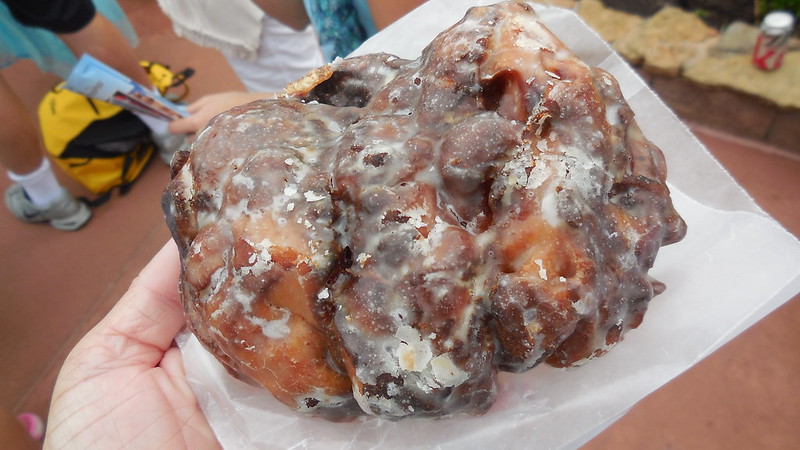 There was a great atmosphere in the line and we got quite friendly with the other groups around us, as we waited patiently. Luckily, it was quite overcast so it wasnt too uncomfortable waiting outside. We felt quite a sense of achievement when a CM took a group of us and led us over to the front part of the line, telling us that our wait would be approximately 30 minutes from there. 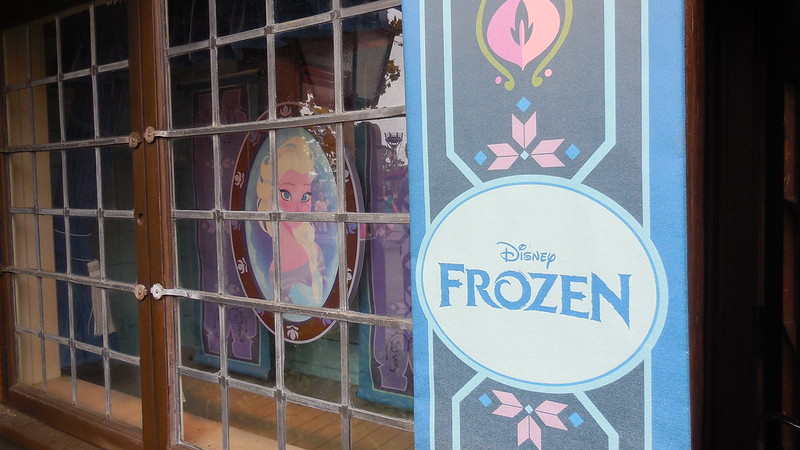 There was a family in front of us and the Dad was very excited to be meeting the princesses. He kept saying Daddy likes the princesses, which made him sound a bit like a dirty old man. When it was his familys turn, after the kids had their pictures done, he asked Can Daddy have a picture? He held his arms out as if to get Anna and Elsa to link arms with him but Elsa mis-interpreted the gesture and thought he was asking her to feel his muscles. She looked extremely perturbed. We were in bits watching this exchange.

Next it was our turn and, after a 90 minute wait, we finally got to meet Anna and Elsa. Sian was pretty pleased and had worn her new t-shirt in honour of the occasion. I am not great with face characters, to be honest; I just cant figure out what to say to them or how to interact. Elsa freaked me out a little bit, to be honest. She was a bit too in character for me, telling me about her sister having conversations with the portraits but they made a fuss of Sians shirt, which was nice. We had a quick couple of pictures and then made a hasty exit. 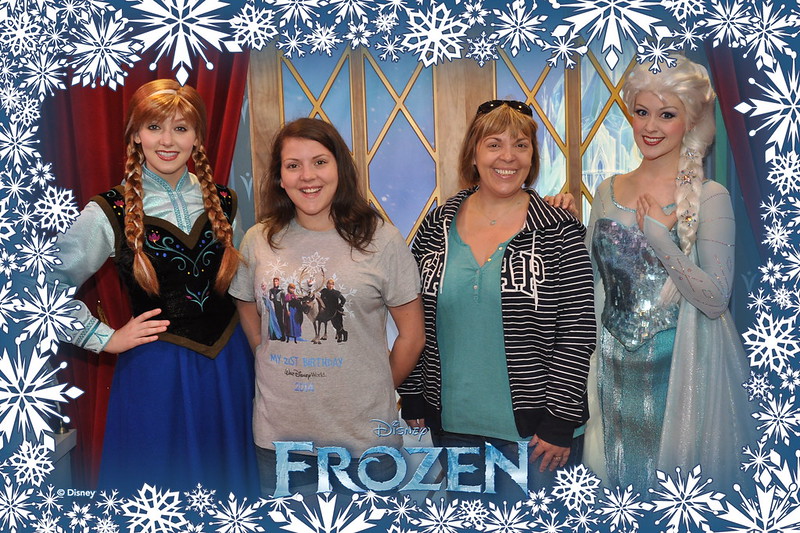 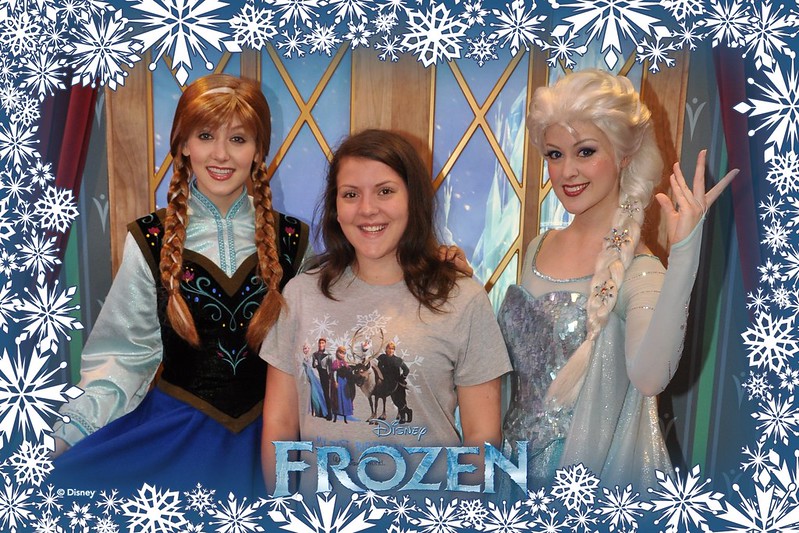 Our first FP+ was for Test Track so we made our way over there. The weather was not looking promising and I joked to Sian that it was in honour of St Patricks Day, as it was just like the weather in Ireland. 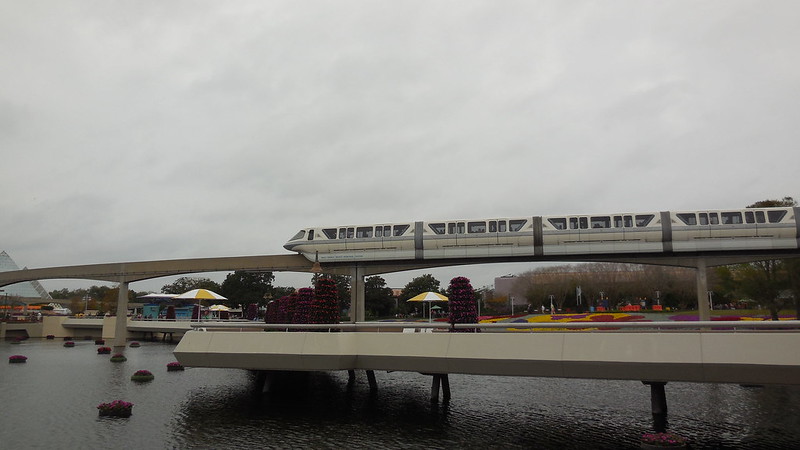 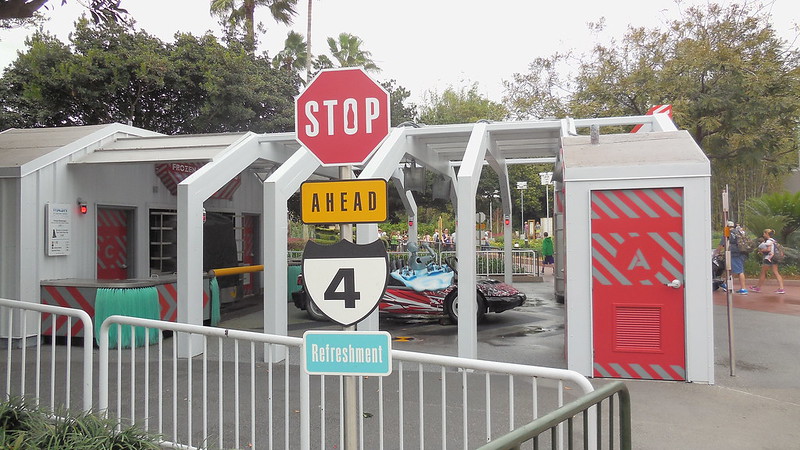 We had some time to kill as we needed to be over this side of the park for our next FP+, Mission:Space, so we decided to have a quick snack. 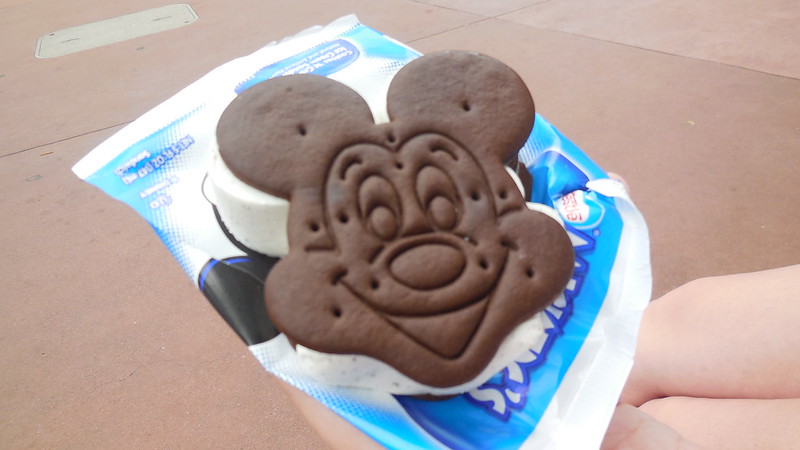 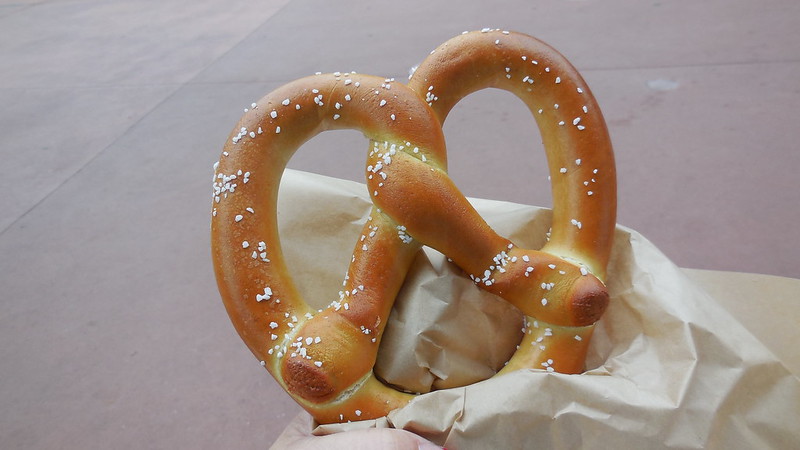 After our snacks, we went over to Test Track and, after a very short wait, we were soon designing our vehicle. 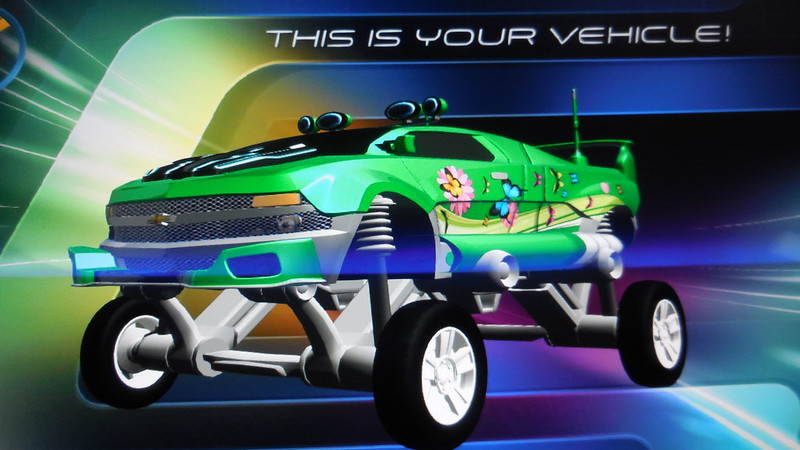 This time we scored 219 with our vehicle. 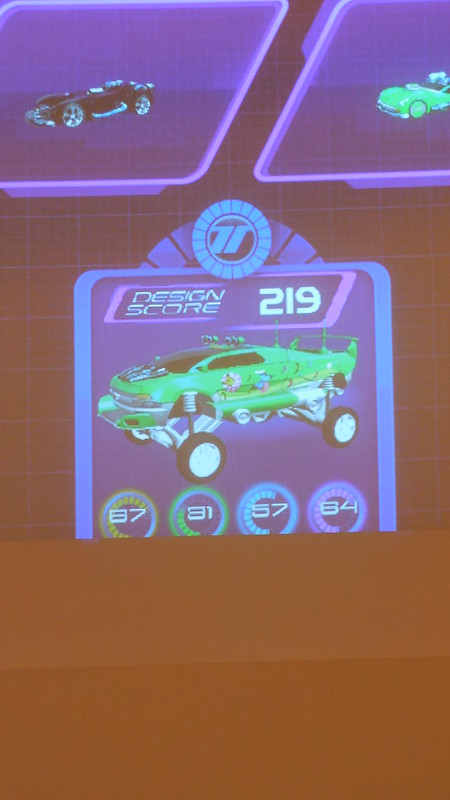 The top score of the day so far was 224, so we werent too far behind. 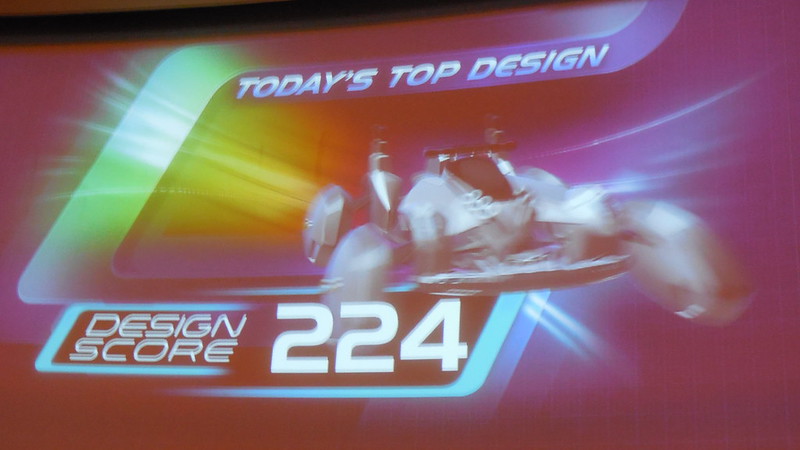 After another Mission to Mars, we were ready to soar over California! And then we hit World Showcase. We caught the boat over to from World Showcase Plaza over to Germany and walked clockwise around World Showcase. By now, there was some persistent rain that didnt seem like it was going to let up. It was early afternoon and we were both getting a bit hungry so we grabbed some chicken nuggets (Sian) and fish and chips (me) and stood in the pouring rain to eat them. It was around now that I realised there is literally nowhere to take shelter in Epcot when its raining and you want to sit and eat (other than TS restaurants). So, by now, we were soaked through and fed up and decided to call it a day, head back to the room and star the packing. 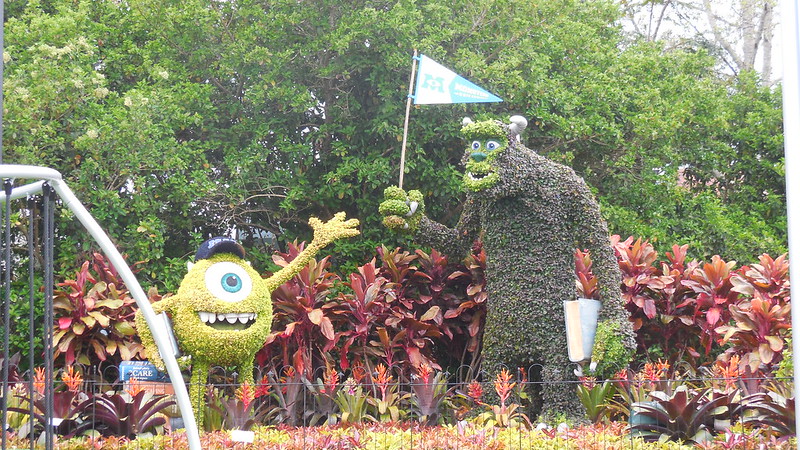 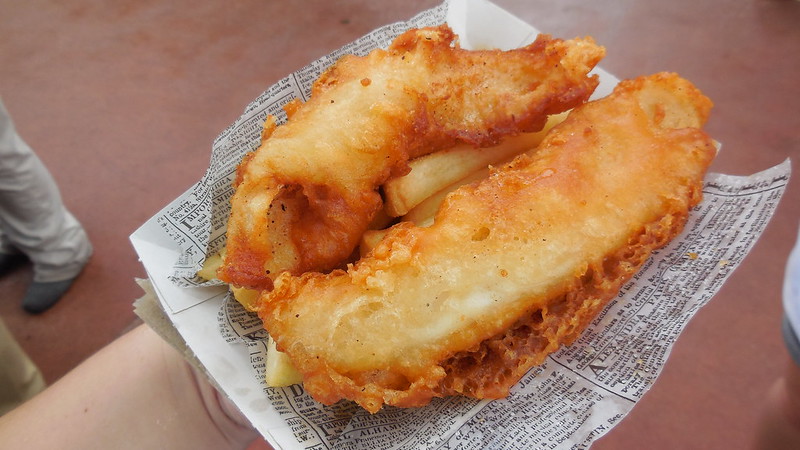 After spending a few hours back in the room and finishing most of the packing, we had to head out to Downtown Disney for our ADR at T-Rex Café. We both showered and dressed in reasonably sensible clothes as it was still pouring. Unfortunately, no amount of sensible dress could protect us and by the time we got to T-Rex, we were both soaked to the skin. I did not have a single dry spot on my clothes, my feet were wet and cold and I was really not in the mood for tonights outdoor St Patricks Day celebrations. 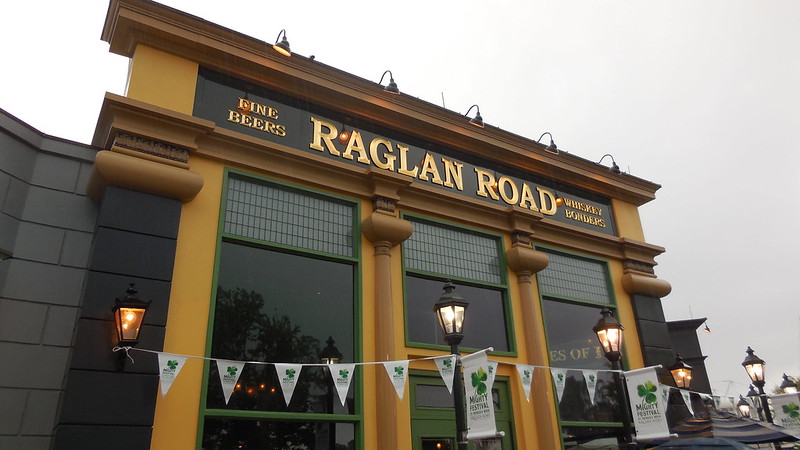 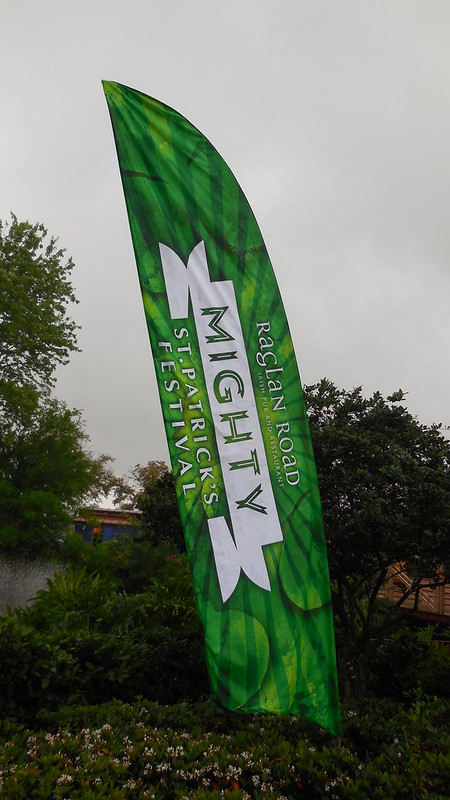 For some reason, we were put at a table for eight in the restaurant, which was a little weird. While I was in the bathroom (trying to dry my shoes in the hand dryer), a server approached Sian and asked if we would mind moving to a smaller table. Sian asked if she could wait until I was back from the bathroom but the server never came back. We had a lovely meal at T-Rex but, again, our server seemed a bit distracted. For appetiser, we shared the Megalosaurus Mozzarella. Then Sian had the lasagne (she swears this is the best lasagne shes ever tasted and this was the only reason wed had to come here) and I had the chicken and shrimp. 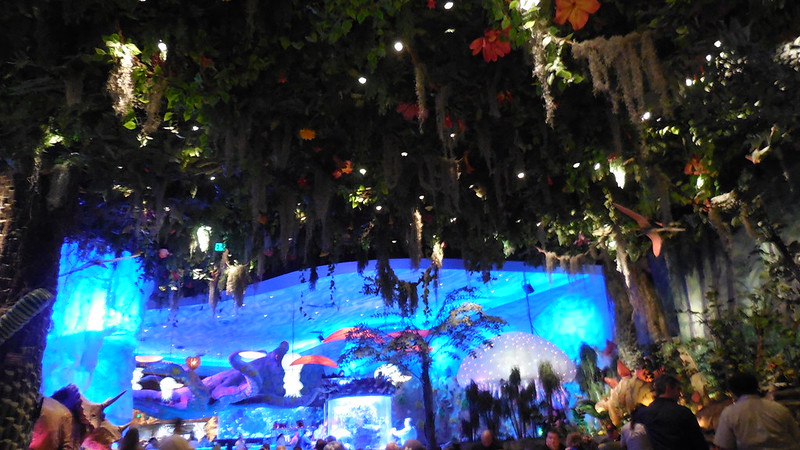 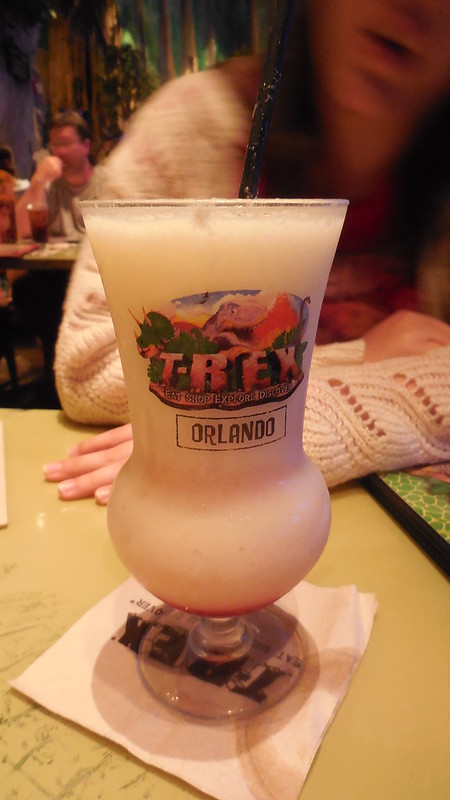 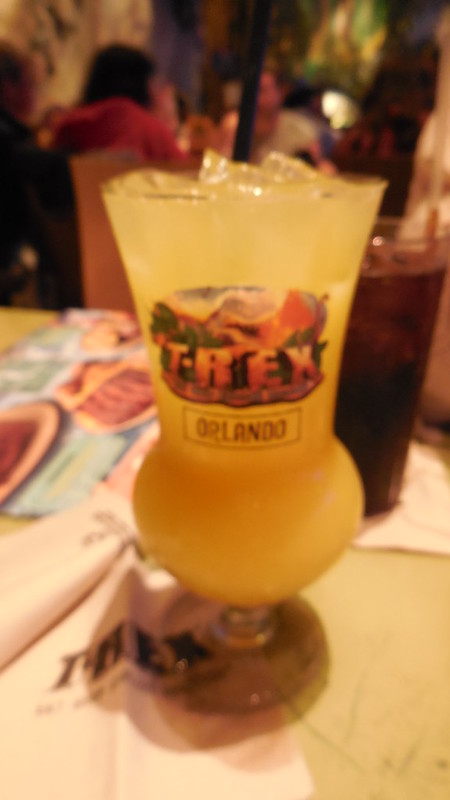 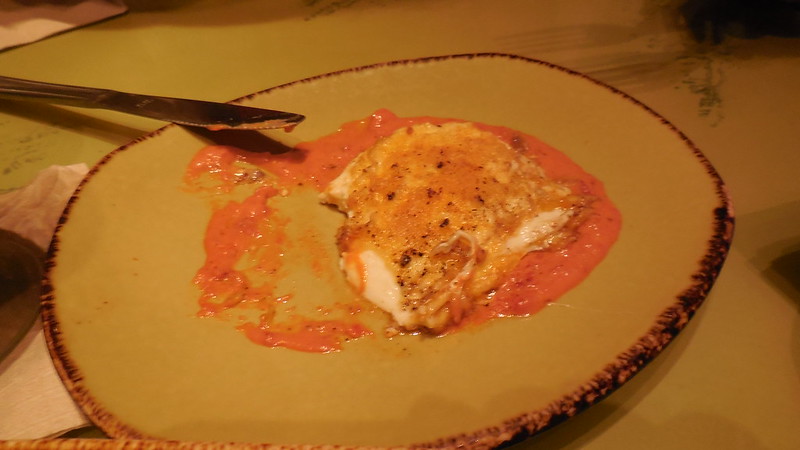 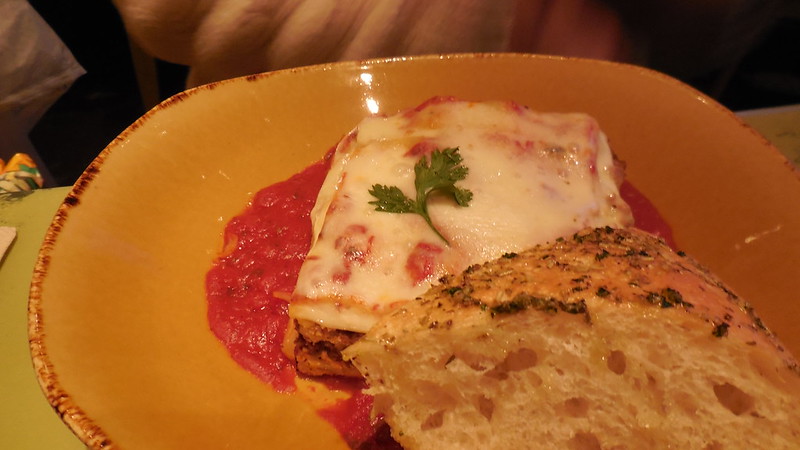 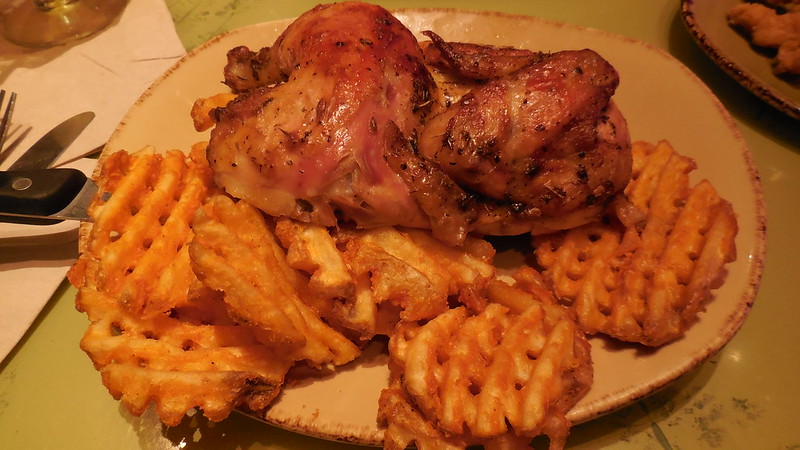 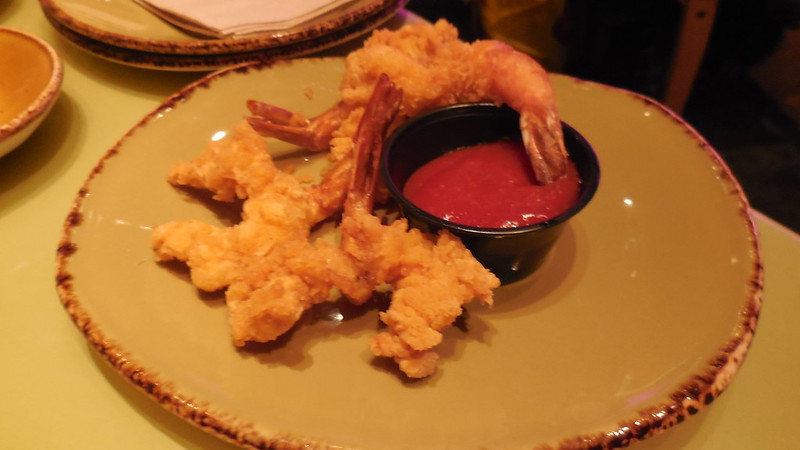 After we paid the check, I messaged Tammy to let her know that we wouldnt be meeting up with them. We were both so cold and wet that we just wanted to head back to the room. We walked to the Market Place to catch the bus back to the resort, stopping in at Goofys to get a choc covered marshmallow to take back to the room. 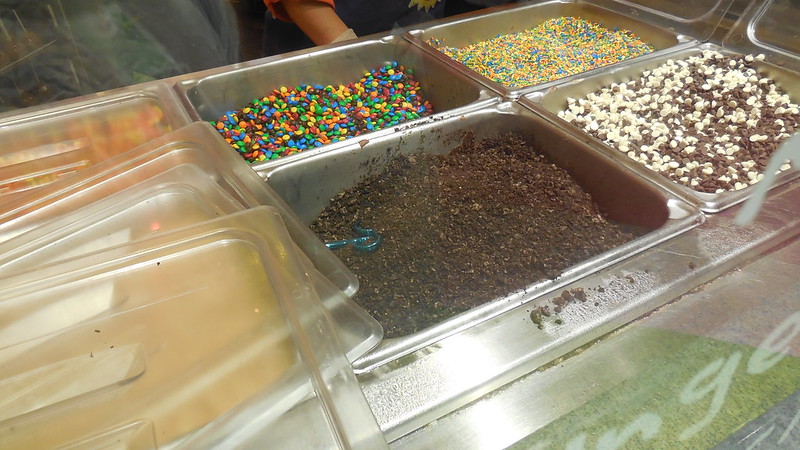 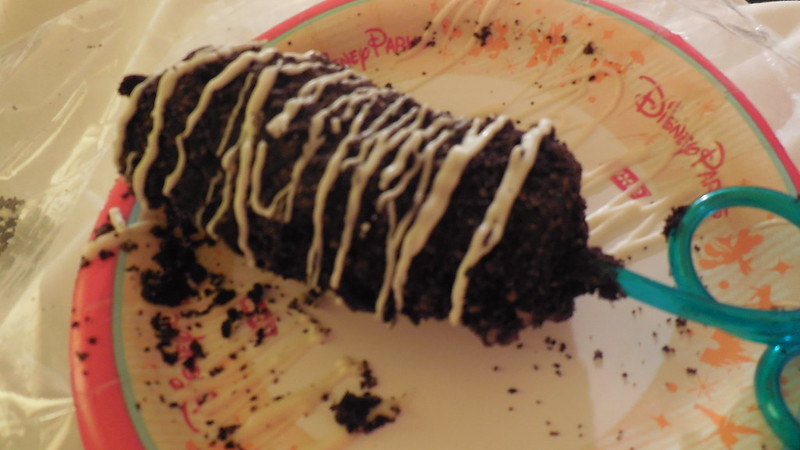 Yet again, we had major bus issues tonight and it took us nearly two hours from leaving T-Rex to getting back to the room. Note to self: When staying at Boardwalk, DO NOT use the bus to get from Downtown Disney back to the resort.

You are a good Mum standing in that line for so long!
We have got a FP+ for A&E next week, otherwise I would happily skip it
Never eaten at T Rex - the cocktails look nice though

I haven't seen Frozen yet so don't know what all the hype is about. Better get the lasagne next time we go to T Rex then if its the best ever.

Linda67 said:
You are a good Mum standing in that line for so long!
We have got a FP+ for A&E next week, otherwise I would happily skip it
Never eaten at T Rex - the cocktails look nice though

See, I AM a good Mum

Well done on scoring a FP+ for A&E - what time did you have to get up to get that then? Yes, while the food is OK at T-rex, the cocktails are pretty good. I love the Cosmo Cotton-tini

Chilly said:
I haven't seen Frozen yet so don't know what all the hype is about. Better get the lasagne next time we go to T Rex then if its the best ever.
Click to expand...

Yes, Sian still claims the T-Rex lasagne is the best.
A

loving the trippie,love the Frozen pics, glad you didn't have to wait 4 hours

aaronandterri said:
loving the trippie,love the Frozen pics, glad you didn't have to wait 4 hours

Hope you get FP so Izzi can meet them

<font color=blue><marquee>Am I the only one who lo

Love frozen not sure I would queue for that long tho

irongirlof12 said:
Love frozen not sure I would queue for that long tho
Click to expand...

Oh boy do I remember this day well, we were also in Epcot and got soaked to the skin. We ended up cutting our day short and headed to Sanaa for dinner instead. It was miserable

Oh, that was quite a challenging day indeed!